The season that was: the most successful breeders in 2021/22

11 min read
Following the culmination of the 2021/22 racing season last Sunday, we take a look at where the majority of the Australian 450 stakes winners were bred.

Headlined by their star homebred Anamoe (Street Boss {USA}), Godolphin Australia enjoyed another hugely successful season of results, with the boys in blue producing 35 stakes wins in Australia in 2021/22 – the most by any breeder. 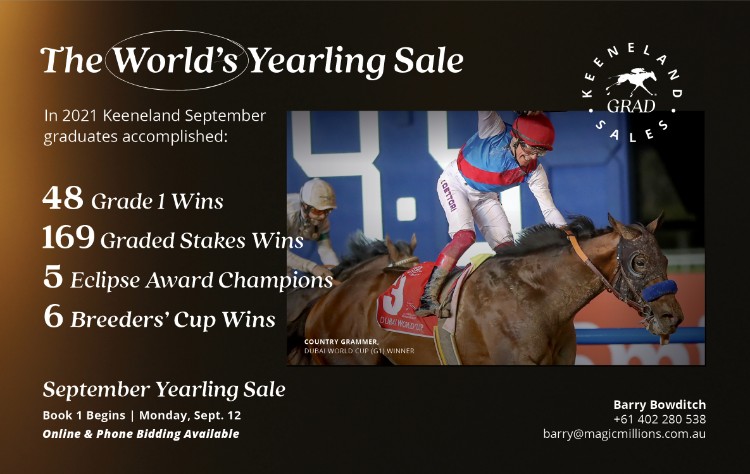 Six of those victories took place in Group 1 grade, with Anamoe responsible for two of them, the Caulfield Guineas and the Rosehill Guineas. Anamoe also produced two of Godolphin’s 11 Group 2 triumphs, The Run To The Rose and the Hobartville S.

Godolphin’s four other Group 1 winners were Cascadian (GB) (New Approach {Ire}) in the All Aged S., Colette (Hallowed Crown) in the Empire Rose S., Willowy (Kermadec {NZ}) in the VRC Oaks and Daumier (Epaulette) in the Blue Diamond S.

Street Boss (USA) did a wonderful job; the shuttle stallion, who stands this season at Darley for $77,000 (inc GST), was responsible for six stakes victories.

Arrowfield Stud’s two other Group 1 winners were Yearning (Snitzel) in the Thousand Guineas and Profondo (Deep Impact {Jpn}) in the Spring Champion S. Prizemoney for their Group 1s totals $1,180,000.

Count De Rupee (Real Impact {Jpn}) won the G2 Victory S. and then there were Group 3 winners Flying Evelyn (Not A Single Doubt) and Williamsburg (Snitzel). Bend The Knee (Snitzel) and Dzsenifer (Scissor Kick) won at Listed class, while Soaring Ambition (Not A Single Doubt) took out the R. Listed Magic Millions Wyong 2YO Classic.

Gallery: Some of Arrowfield Stud's other stakes winners this season

Leviathan breeders and owners Bob and Sandra Peters continued their dominance of Western Australian racing and breeding. The Peters’ bred four Group 1 winners in 2021/22 were by four separate sires. There was one at Flemington; Superstorm (Sebring), who was triumphant in the Cantala S., then Western Empire (NZ) (Iffraaj {GB}) took out the Railway S., Regal Power (Pierro) claimed the Kingston Town Classic and Graceful Girl (Nicconi) proved superior in the Winterbottom S.

The Peters’ quarter of Group 1 winners netted them $2,940,000 in prizemoney, accompanied by four Group 2 wins – Superstorm, Treasured Star (Toronado {Ire}), Regal Power and Midnight Blue (So You Think {NZ}), while Western Empire won at Group 3 level. True Attraction (More Than Ready {USA}) was one of their three individual Listed winners (the gelding won twice in that grade), with Midnight Blue and Devoted (Xtravagant {NZ}) the two others.

An Aussie treble for Waikato Stud

New Zealand-based Waikato Stud had three Australian Group 1 winners from 2021/22 come off their farm. The first of those was Mo’unga (NZ) (Savabeel), who claimed the first Group 1 of the season, the G1 Winx S., at Randwick in August. He was bought out of the 2019 New Zealand Bloodstock Karaka Sale, Book 1 for NZ$325,000.

Never Been Kissed (NZ) (Tivaci), who runs in the Waikato Stud silks, repeated the dose when she won the Flight S., before gun mare Probabeel (NZ) (Savabeel) was victorious in the Might And Power S. Probabeel was NZ$380,000 buy from 2018 New Zealand Bloodstock Karaka Book 1.

Waikato Stud also had two Group 1 successes in their homeland; Tiptronic (NZ) (O’Reilly {NZ}) in the Zabeel Classic and Noverre (NZ) in the 2000 Guineas, bringing their total to an exceptional five.

Gallery: Some of Waikato Stud's Group 1 winners this season

Verry Elleegant (NZ) (Zed {NZ}) delivered her Kiwi breeder, Don Goodwin, three Group 1 victories. None more remarkable than the Melbourne Cup, where the champion mare produced one of the greatest wins in the history of the iconic race.

Verry Elleegant also won the George Main S. and Chipping Norton S., with her prizemoney for that trio of races a whopping $5,324,000.

Fireburn flies the flag for Laurel Oak Bloodstock and Co.

Rebel Dane’s star performer was the brilliant filly Fireburn (Rebel Dane), who was bred and is raced by Laurel Oak Bloodstock, Grant Bloodstock and Carpe Diem Syndicate. She won the first two legs of the Australian 2-Year-Old Triple Crown – the G1 Golden Slipper S. and the G1 ATC Sires' Produce S., before running second in the G1 Champagne S.

A hat-trick of Group 1s for Windemere Stud

Steve Tregea’s Windemere Stud celebrated three Group 1s, with all of them coming from Shamus Award gelding Incentivise, who was arguably the most improved horse for the season.

Incentivise won the Makybe Diva S., Turnbull S. and Caulfield Cup with the space of six weeks, tallying $4,200,000 in prizemoney.

The star stayer started a pronounced favourite in the Melbourne and lost no admirers when running second to Verry Elleegant.

Tregea has sold out of Incentivise, with Ozzie Kheir to manage the ownership base of the now 6-year-old.

The prominent owner-breeder had a stack of Listed winners – Chaillot (Testa Rossa), Palazzo Spirit (Spirit Of Boom), Me Me Lagarde (Star Turn), Blondeau (I Am Invincible), Aitch Two Oh (Headwater) and Stroll (Snitzel).

That filly was one of three individual Group 3 winners for Aquis Farm, with See You In Heaven (Divine Prophet) and Splendiferous (Pride Of Dubai) the other two. That trio combined for four Group 3 triumphs.

Aquis Farm also enjoyed three Listed victories, courtesy of See You In Heaven, Splendiferous and Not An Option (Not A Single Doubt).

The Kerry Parker-trained Think It Over (So You Think {NZ}) was one of the stars of the season, winning five stakes races, with the highlight being the G1 Queen Elizabeth S, which carried a winner’s cheque of $2,300,000.

The tough stayer was bred and is raced by Bylong Park.

She recently sold for NZ$1,550,000 via a recent bespoke Inglis Digital online auction.

Forbidden Love (All Too Hard), who was bred by Kerry O’Brien, won the Canterbury S. and the George Ryder S. in the space of a fortnight. She was offered by Bhima Thoroughbreds at the 2019 Magic Millions Gold Coast Yearling Sale, where Richard and Anthony Freedman paid $150,000 for her.

Zaaki (GB) (Leroidesanimaux {Brz}) provided her breeder, Kirsten Rausing of Lanwades Stud, with a further two wins in top company. The imported gelding won the Underwood S. and the Mackinnon S., as well at the All-Star Mile, which isn’t a stakes race, and two Group 2s – the Tramway S. and the Hollindale S.

The Geoff Russell-bred Montefilia (Kermadec {NZ}) – a $130,00 purchase by David Payne from the draft of Tyreel Stud at the 2019 Magic Millions Gold Coast Yearling Sale - landed the Ranvet S. and The Metropolitan.

Duais (Shamus Award) emerged as one of the country’s top stayers and her win in the G1 Tancred S. was mesmerising. That victory came after her Australian Cup triumph, while she also took out the G3 Coongy H. Duais was bred by Matthew Irwin and he races her alongside the Harris family.