And the story behind Apache Chase is certainly an interesting one - and very Queensland, with the talented 4-year-old being not only his sire's first Group 1 winner but the first for his Ilfracombe-born trainer Desleigh Forster who was moved to tears by his success, telling the media that, "This horse means the world to me." 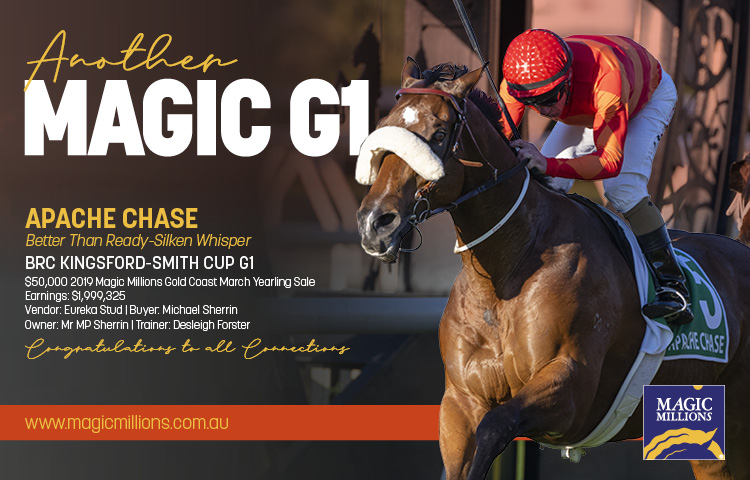 They came about booking their mare Silken Whisper (USA) (Diesis {GB}) to Better Than Ready in a novel way - by winning the nomination.

"For two years running the Better Than Ready syndicate sponsored the Listed Silk Stocking S. at the Gold Coast," Kruger said. "And both times we offered a nomination to the stallion to the owners of the first three home.

"Only one breeder took the offer up and that was Eureka. The mare slipped the first time but we offered them a free return and Apache Chase is the result of that mating."

"Only one breeder took the offer up (of a free nomination to Better Than Ready) and that was Eureka. The mare (Silken Whisper) slipped the first time but we offered them a free return and Apache Chase is the result of that mating." - Jeff Kruger

A horse, it seems, who was meant to be.

"The criteria was that the mare sent had to be either stakes performed or the dam of a stakes horse," Eureka's Angus McAlpine recalled. "So we chose Silken Whisper who had produced the G2 Bill Stutt S. winner Churchill Downs."

"She was a big, beautiful, strong mare with good bone and she passed that onto Apache Chase. At the yearling sales he was big, strong and leggy - he just didn't look like an early type of Better Than Ready."

"She (Silken Whisper) was a big, beautiful, strong mare with good bone and she passed that onto Apache Chase." - Angus McAlpine

Jeff Kruger agreed, inspecting the youngster at the sales and noting that, "He was a really nice horse who just looked like he'd need a bit of time and that has been the case."

Though Apache Chase did race three times as a late 2-year-old, in mid-July breaking his maiden at Eagle Farm and from there progressing through the grades to a G3 Vo Rogue S. victory at his seventh start.

Next time he won the Listed Daybreak Lover S., and on this weekend last year, the G3 Fred Best Classic. He was again in form over the spring, winning the Listed Weetwood H. and holding on gamely for a Golden Eagle S. fourth after facing the breeze.

Apache Chase is a horse who knows how to find the line, winning nine of his 22 starts and it was a good winning strike rate that first appealed to Jeff Kruger in regards to Better Than Ready - a horse who was successful at half of his 16 starts.

"To be honest I had not taken a lot of notice of him (Better Than Ready) when he was racing but Yarramalong Park's Richard Foster brought him to my attention, saying he wanted to get him - asking if we would stand him.

"The first thing I did was have look at his form and once I'd done that it was a no-brainer!"

"The first thing I did was have look at his (Better Than Ready's) form and once I'd done that it was a no-brainer (to stand him at Lyndhurst Stud Farm)!" - Jeff Kruger

Taken not only by his four Listed wins, Kruger was also impressed by Better Than Ready's interstate efforts including a more than handy G1 Newmarket H. fifth, a race in which he finished just ahead of, coincidentally, Eureka Stud's Spirit Of Boom (who is, of course a son of Lyndhurst's prolific winner-getter Sequalo by Rustic Amber {Ire}).

Kruger was confident from the get-go that Better Than Ready would do well but what surprised him (and continues to do so) is how early they run and win.

A horse who raced just the once at two, Better Than Ready is currently Australia's leading 2-year-old sire by winners (ahead of Snitzel, Spirit Of Boom and I Am Invincible) with 16 of his 54 juveniles to race this season between them winning 20 races.

Also appealing to Kruger is that Better Than Ready is still getting winners from his first couple of crops (including Aspen Chase), so not only do they get up and running early, they go on with it.

"He really is a terrific winner-getter," he said, happily adding that, "They are not hard to sell!"

Lyndhurst Stud boasts a proud history of standing stallions known for their ability to sire large numbers of winners. Smokey Eyes (Ire) was a leading sire of winners whilst the seven-time Champion Queensland Sire Celestial Dancer (Ire) in the 1995/96 season set a world record for the most number of individual winners in a year - a whopping 239!

And Sequalo did a great job with his 746 winners from 1062 starters - his legacy continuing via the deeds of his son Spirit Of Boom who sired two winners on Saturday, including the unbeaten Perth galloper Top Of The Pops.

Gallery: Some of the impressive stallions Lyndhurst has stood over the years

Sequalo also made his mark on the Eagle Farm meeting with his G1 QTC Sires' Produce S.-winning daughter Star Shiraz being the grandam of the G3 Fred Best S. winner Vilana (Hallowed Crown). Star Shiraz - who currently resides at Aquis Farm - is out of a mare by another Queensland legend, Eureka Stud's Semipalatinsk (USA) and her dam Starshine Express was sold by Lyndhurst in utero cheaply 'at a Sunday sale at Toowoomba!'

And one of Star Shiraz's co-breeders, the 94-year-old Tom Shelton (also Sequalo's biggest shareholder) was excited cheering on Apache Chase whilst recovering from a bout of COVID. He too is a part of the Better Than Ready syndicate - along with Yarramalong, Lyndhurst and most of those who raced the horse.

With such wide support it is little wonder this year's Kingsford-Smith Cup winner was welcomed back to scale with such notable applause!