9 min read
For the first time in a few years, international buyers will be back in force at the Magic Millions National Broodmare Sale and this year brings a whole new entity to the table with Natalma headed-up by John Ferguson set to make their presence felt as both a buyer and seller on the Gold Coast. 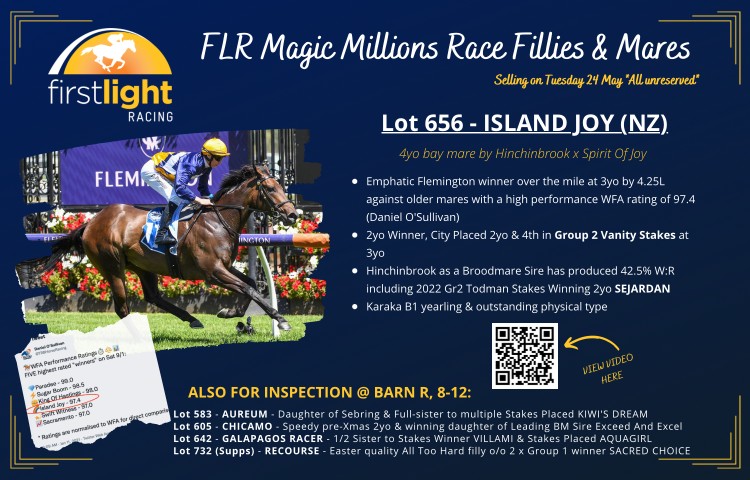 Three of these purchases were at Tattersalls July, three at Fasig-Tipton November, eleven at Keeneland November and four at Tattersalls December. Natalma are also active in the private market.

Ferguson - a familiar face on the Gold Coast largely thanks to his 25-year tenure with Godolphin - told TDN AusNZ the idea to start this global mare bloodstock portfolio was born because they wanted to seize an opportunity to invest in vibrant global markets such as Australia and America.

“We have a few friends in London and in other parts of the world who want to get involved in investing in mares predominantly in America and Australia because they are such vibrant markets,” said Ferguson.

“We have a few friends... who want to get involved in investing in mares predominantly in America and Australia because they are such vibrant markets.” - John Ferguson

“If you look at Australia now with the government support, the prizemoney is running at very attractive levels, which is reverberating down into the business.”

Ferguson said the enthusiasm for racing and bloodstock in Australia, particularly from the younger generations, gives him the confidence to invest in the country.

“There’s such an amazingly vibrant, younger generation, which makes you think that the business is in really good hands going forward.

"I think a number of people in Europe love racing, but can see the potential that is here in Australia, not only as a trading post, but also as somewhere to get involved in racing horses themselves."

Rifqah herself is a half-sister to Australian Group 3 winner Great House (Galileo {Ire}) and fellow Group 3 scorer Aboulie (Exceed And Excel). Further afield the mare hails from one of the most influential families in the global stud book.

Her third dam is Allez Les Trois (USA) (Riverman {USA}) and she is a half-sister to the breed-shaping mare Urban Sea (USA) (Miswaki {USA}), who produced champion racehorses and sires Galileo (Ire) and Sea The Stars (Ire), among many others.

Gallery: The three Natalma mares to be offered as part of the Arrowfield Stud draft at the Magic Millions National Broodmare Sale, images courtesy of Magic Millions

The trio is completed by winning Siyouni (Fr) mare Elvic (GB) (Lot 1072) and she is out of Group 1-winning Barathea (USA) mare Magical Romance (Ire), who is also the dam of Australian Listed winner Tall Ship (Ire) (Sea The Stars {Ire}) and the dam of Group 1 winner Channel (Ire) (Nathaniel {Ire}).

Having purchased mares in America and Europe, Natalma will be making their first foray into the Australian market this week and the trio they haven chosen to offer in this market were meticulously planned.

“The majority of mares that one buys in America will stay in America, same with Australia and the same with Europe, but there are sometimes opportunities that present themselves where you feel it might be advantageous to you to move them and it's really as simple as that,” said Ferguson.

“The investors wanted to get involved down here and this was a good way for them to get started and whatever we make from these mares will be reinvested.”

“The investors wanted to get involved down here and this was a good way for them to get started and whatever we make from these mares will be reinvested.” - John Ferguson

While all three mares boast typically deep European pedigrees which have proved popular in Australia in the past, another exciting and intriguing aspect to the Natalma’s band of mares is that all three will be offered in-foal to Juddmonte’s superstar stallion Frankel (GB).

Since 2015, 10 mares have been offered in foal to the unbeaten son of Galileo (Ire) at the Magic Millions National Broodmare Sale and they have been well received by the buying bench.

Meanwhile, the following year three mares who had been covered by the stallion made $1.725 million, selling for an average of $575,000.

Frankel mania hit fever pitch once again on the Gold Coast last week, when Coolmore Stud sold a pair of weanling colts by the stallion for a total of $1.210 million and, with an extraordinary 13 mares carrying the stallion's offspring set to sell this week, Frankel fever could sweep across the Magic Millions Sale complex once again with buyers keen to get their hands on the rare offerings.

“It is such an honour to have this many mares in foal to Frankel in any one catalogue. It is an extraordinary collection of mares,” said Magic Millions’ Managing Director Barry Bowditch.

“It is such an honour to have this many mares in foal to Frankel in any one catalogue. It is an extraordinary collection of mares.” - Barry Bowditch

“But Frankel himself, he’s a world phenomenon. He was an unbelievable racehorse and he was doing it stud and more importantly he is doing it here in Australia.

“What last week told us was that if you have a decent product by Frankel you are going to get paid very well and I think that should give people the confidence to bid accordingly over the coming few days.”

"If you have a decent product by Frankel you are going to get paid very well and I think that should give people the confidence to bid accordingly." - Barry Bowditch

Frankel has produced 95 stakes winners globally which fires at a stakes winners to runners strike rate of 16.2 per cent in total, while in Australia his statistics make for impressive reading, with the stallion having sired 37 winners from 59 starters and 10 of those winners are stakes scorers.

Ferguson believes Frankel’s ability to produce top-class horses in both hemispheres places him in the same vein as the great Danehill (USA) whose exploits in Australia changed the face of the industry.

“What Frankel is doing in Australia is similar to what he's doing in Europe in the sense that he's hitting 26 per cent black-type horses to runners here in Australia, which is on a par with Europe,” Ferguson explained. “That really is incredible, there hasn't been a horse since Danehill that has been so dominant in both hemispheres.

“What Frankel is doing in Australia is similar to what he's doing in Europe in the sense that he's hitting 26 per cent black-type horses to runners here in Australia, which is on a par with Europe.” - John Ferguson

“Frankel gets different types of yearlings but also they run at all different types of trips, which is very rare. He was the best racehorse I ever saw in my life. He won the Guineas in blistering fashion and the St James’s Palace Stakes at three. He then went on to be the top horse at four, but he could have won any sprint race you like as well and that's probably why he's so successful down here.”

A headline horse for Frankel in Australia for the past few seasons has been the Chris Waller-trained Hungry Heart, who advertised the stallion’s talents when she won the G1 Vinery Stud S. and the G1 Australian Oaks in 2021 and eagle-eyed buyers will notice that one of Natalma’s offerings is bred on a similar cross to the high-class mare.

Hungry Heart is out of Pivotal (GB) mare Harlech and this has proved to be one of the most potent crosses in the book, with mares by Pivotal when crossed with Frankel producing 17 winners from 25 runners, including seven stakes winners and they are headed by four Group 1 scorers - including Hungry Heart - which fires at an extraordinary stakes winners to runners strike rate of 28 per cent.

Ferguson said opting to mate Elvic - a daughter of Pivotal's brilliant sire son Siyouni - to Frankel made sense given the success of the cross.

“Siyouni is by Pivotal which is why we thought that would have been a good mating for her," he explained.

"She’s a winning Siyouni mare and you just think to yourself that Frankel has worked well with Pivotal on the Southern Hemisphere, so that looked like a good mating."