No Mystery in Cook's ongoing success

6 min read
After another successful weekend with the stakes victories of Shout The Bar (Not A Single Doubt), Crystal Pegasus (GB) (Australia {GB}) and Mount Popa (Ire) (Maxios {GB}), prominent owner Francis Cook is looking forward to a big couple of months in the sales ring and on the racetrack.

Shout The Bar (Not A Single Doubt) was already booked in to be sold at the upcoming Inglis Chairman's Sale in May before her return to form in Friday night's G2 Sunline S. at Moonee Valley, a performance which puts a very current hue on her race profile. 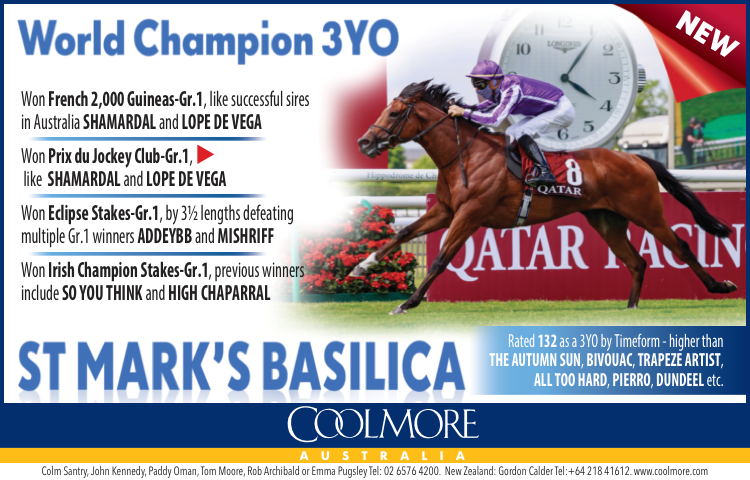 The dual Group 1-winning daughter of Not A Single Doubt is set to be one of the star lots of the Chairman's Sale, with Cook admitting the decision to sell her wasn't an easy one.

"It was a very, very tough decision, but she has shown what a quality mare she is on the right style of track. She has spent the last 12 months on tracks that didn't suit her," he told TDN AusNZ.

"Sometimes mares can go off in their form. But she has those two Group 1s on her page and now a Sunline S. to boot."

Her all-the-way success in the Sunline S. was an excellent reminder of the talent which saw her win the G1 Vinery Stud S. on this same weekend two years ago, and then the G1 Empire Rose S. later in 2020.

The Gai Waterhouse and Adrian Bott-trained mare hadn't been back in the winners' circle since but thrived on the firmer track on Friday night, giving some further food for thought as to what else she might target before heading through the ring at the Riverside Stables on May 6.

"I’ll leave that to Gai and Adrian. They have got a few other options. The Coolmore would be an obvious one, but if that is on a Heavy track, she won't run," Cook said.

As to what her value might be when offered as part of the draft of Glenesk Thoroughbreds, Cook is very positive Shout The Bar should find plenty of admirers.

"It is always tempting to think we could get another season out of her. But that is for someone else to try if they buy her."

All about the timing

As mentioned, there was certainly a sense of timing about Shout The Bar's win as there was when Crystal Pegasus booked himself a spot in the Caulfield Cup less than 24 hours later with an impressive victory in the Listed Mornington Cup in the same Mystery Downs colours.

It was a third Mornington Cup win for Cook as an owner, a race he is developing quite an affection for.

"We won it with Instrumentalist back in 2014 in Neil Werrett's colours and Neil is in Crystal Pegasus with us as well. We won it with Mount Popa last year and of course he won again yesterday in the (G3) Neville Sellwood at Rosehill, a year later," he said.

"Between that, a third Mornington Cup and Shout The Bar, it was quite an amazing pattern."

An imported 5-year-old, Crystal Pegasus now has claims to be one of the more exciting emerging staying prospects in the country having won his past four starts, including his past two at stakes level.

"Chris Waller can do that with these imported horses. He tested him over 2600 metres last time (in the Listed Roy Higgins Quality) to see if he could be a genuine stayer. Up until then, we thought he might be a 2000-metre horse because he has a pretty good finishing sprint," Cook said.

"But once he won over the 2600 metres, Chris targetted the Mornington Cup, which gets him automatic entry to the Caulfield Cup. You would not have thought three starts ago that we were looking at a Caulfield Cup horse, however, he rises to every challenge.

"You would not have thought three starts ago that we were looking at a Caulfield Cup horse, however, he (Crystal Pegasus) rises to every challenge." - Francis Cook

"The way he stuck it to Pondus on Saturday, around the home turn and outstayed him in the straight and Pondus was bought as a Melbourne Cup horse, it gives us a lot of encouragement."

Bred by Southcourt Stud, Crystal Pegasus originally raced for the Rothschild family in the stables of Sir Michael Stoute, winning two of his eight starts before being offered through the 2020 Tattersalls Autumn Horses in Training Sale.

Cook and his wife Christine have been long-time supporters of Waller, racing several successful imports, but had moved away from that model for a time, only to get involved again in 2020.

"There were five in the group that Chris Waller bought from over there. We hadn't been involved with these European horses for two or three years because they got too expensive," he said.

"For what we were able to pay over there, the level of horses hasn't been at the same level as they were when we were buying Foreteller and Moriarty and horses of that calibre.

"When they bought this one, we thought we’d go back in, having been involved with Chris since 2008. I went through the pedigree and performance and he had some upside."

"When they bought this one (Crystal Pegasus), we thought we’d go back in, having been involved with Chris (Waller) since 2008. I went through the pedigree and performance and he had some upside." - Francis Cook

The upside could see him head to the G1 Sydney Cup on April 9, where he may meet another stayer Cook holds an interest in, Mount Popa, who was impressive handling the big wet on Saturday for William Pike and Team Hawkes.

Crystal Pegasus is now second favourite for the Sydney Cup, which would likely be a final run for the campaign before being set for the rich handicaps of the spring.

"Chris Waller will decide as he always does, but I believe he is still targeting the Sydney Cup and we will see where it goes from there," he said.

"We can then give him a spell and set him for the Caulfield Cup, which he is qualified for."