4 min read
A well-related 2-year-old provided the standout performance of a rain-shortened Rosehill raceday on Saturday, living up to his black-type-laden pedigree with a powerhouse performance in the G3 Schweppervescence.

Williamsburg (Snitzel), trained by Gerald Ryan and Sterling Alexiou and racing in the Aquis colours, outfought the Godolphin filly Moko (Impending) to win an energy-sapping duel by 0.16l. 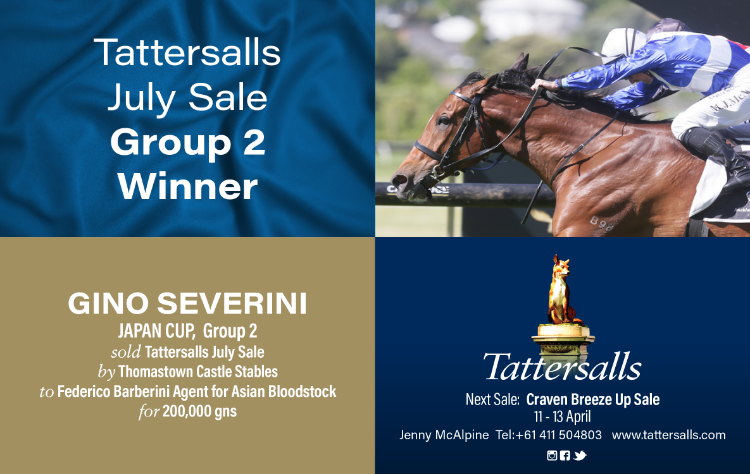 The colt has now had four starts for two wins, along with a second placing and a fourth in the G3 Pago Pago S., and Ryan and Alexiou are likely to back him up in next Saturday’s G1 Inglis Sires’ at Randwick.

Bred by Arrowfield in partnership with Jonathan Munz’s GSA Bloodstock, Williamsburg was offered by Arrowfield at the 2021 Inglis Australian Easter Yearling Sale. He was bought by Tony Fung Investments for $470,000.

As the second winner from two foals to race, Williamsburg has provided an outstanding start for his dam Fenway (High Chaparral {Ire}) – herself a high-class racehorse who won the G1 Vinery Stud S. and G2 WH Stocks S., along with placings in the G1 Myer Classic, G1 Schweppes Oaks, G2 Peter Young S. and G2 Wakeful S.

Fenway’s 4-year-old son Zudin (Redoute’s Choice) has also been a two-race winner, most recently at Canterbury in October, while she has since produced unraced 3-year-old filly Awakening (Snitzel) and a yearling filly by Snitzel. She also has a filly at foot by I Am Invincible.

“He’s putting together a good record, and he had previously finished close up in fourth in the Pago Pago S. as well in his previous start. Hopefully he’s stamping the form out of that race, with our colt Magic finishing just ahead of him in third that day.”

Arrowfield’s homebred colt Magic, also by Snitzel, is out of the G1 Australian Oaks winner Rising Romance (NZ) (Ekraar {USA}), which makes him a full brother to the G1 Thousand Guineas winner Yearning (Snitzel). Magic is trained by Michael, Wayne and John Hawkes, who also have an eye on the Sires’ next Saturday.

Freyer described Williamsburg as a major improver among Arrowfield’s yearling crop 12 months ago.

“He was slightly backwards to start with, but he was a colt who improved considerably during his preparation,” he said. “He just kept developing and developing.

“He (Williamsburg) was slightly backwards to start with, but he was a colt who improved considerably during his preparation. He just kept developing and developing.” - Jon Freyer

“We were very happy with him at the Sale, and he sold well. Full kudos to the Aquis team for picking out another good one. He’s a very promising horse, and races like the Sires’ or the Champagne are likely to be on his radar going forward.

“It’s a great start to the broodmare career of Fenway, who we bought in partnership with Jonathan Munz when she was carrying her first foal – a colt by Redoute’s Choice.

“Fenway is a lovely mare, and she has a really nice Snitzel filly going to the Easter Sale (Lot 166), so today’s win is a very timely update.

“It’s great to see her kick off with an early stakes winner, particularly in a good 2-year-old race. She’s got a very good foal by I Am Invincible at foot, and she’s in foal to Maurice.”

That same recipe has produced another star of this season’s Aquis string, Best Of Bordeaux, who won the G3 Canonbury S. and G2 Silver Slipper before finishing a brave second in the G1 Golden Slipper last weekend.

“Those horses by Snitzel out of High Chaparral mares seem to be having a really good run at the moment,” Freyer said. “They’re probably appreciating the softer tracks a little bit, but it’s obviously proving to be a good nick.”