11 min read
The eagerly anticipated G1 Tancred S. and Vinery Stud S. meeting at Rosehill was called off after just three races, with the remaining seven rescheduled for Newcastle on Monday.

Saturday’s Rosehill card, featuring the G1 Tancred S. and Vinery Stud S., was called off after three races due to unsafe conditions.

The remaining feature races were rescheduled to Newcastle on Monday, with distance changes for the Vinery Stud S. and the G2 Tulloch S.

For the second time within the space of a couple of weeks, trainer Mike Moroney and jockey Patrick Moloney teamed up to spring a surprise in a Saturday stakes race – this time with Not An Option (Not A Single Doubt) in the Listed Neds Hareeba S.

That wasn’t the only upset on the Mornington card, with Virtuous Circle (NZ) (Almanzor {Fr}) defying 60-to-one odds to capture the Cleanaway Sustainability Sires. 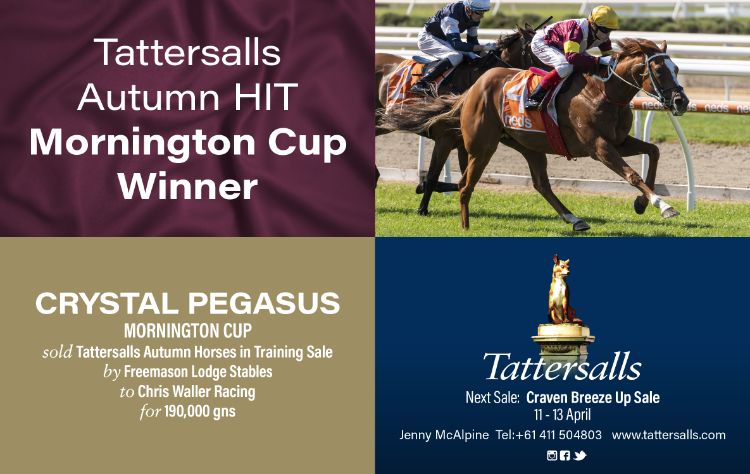 For the second year in a row, one of Rosehill’s autumn showpieces has been washed away in a Sydney downpour.

Twelve months after the Golden Slipper meeting – and the remainder of the entire Sydney autumn carnival – had to be shifted back by a week due to extreme weather and track conditions, another downpour wreaked havoc on Saturday afternoon.

Torrential rain fell on to an already saturated Rosehill track during the early part of the meeting, forcing the cancellation of a star-studded program headed by the G1 Tancred S. and Vinery Stud S.

“Obviously we had that heavy downpour during the running of Race 2, and that really has waterlogged the track,” chief steward Marc Van Gestel said. “A number of riders expressed some concern after that race, but they were willing to try and go through the conditions for the third event.

“Even with the rain letting up, the conditions where still to a point where we had a number of horses blundering in the surface. That track is just waterlogged – we’ve had so much rain in Sydney over the last few weeks.

“Even with the rain letting up, the conditions where still to a point where we had a number of horses blundering in the surface. That track is just waterlogged – we’ve had so much rain in Sydney over the last few weeks.” -Marc Van Gestel

“It just got to the point where we couldn’t be comfortably satisfied that it was going to provide safe footing for the horses. The riders expressed that concern, and we agreed with them.”

The remaining seven races on the Rosehill card have been rescheduled for Newcastle on Monday.

“Racing NSW and the Australian Turf Club believe the best option after consultation with participants is to reprogram the seven postponed races to Newcastle Racecourse on Monday,” Racing NSW said in a statement. “All horses that were scratched will be reinstated.

“Racing NSW and the Australian Turf Club believe the best option after consultation with participants is to reprogram the seven postponed races to Newcastle Racecourse on Monday.” - Racing NSW

Two stakes races were staged at Rosehill on Saturday prior to the cancellation, and the first of those produced a pulsating duel between Williamsburg (Snitzel) and Moko (Impending) in the G3 Schweppervescence.

The pair drew 5l ahead of the other 12 runners in the 2-year-old feature, and at the end of a tight tussle to the finish, Williamsburg edged ahead for a hard-fought victory by 0.16l.

“Full credit to my horse,” jockey Kerrin McEvoy said. “It’s very waterlogged now. He wasn’t loving it, but his ability got him through, and he tried hard all the way to the line. He’s a lovely horse for the future.”

By Snitzel out of the Group 1-winning mare Fenway (High Chaparral {Ire}), Williamsburg has now had four starts for two wins, a second placing and a fourth in the G3 Pago Pago S.

Williamsburg is trained by Gerald Ryan and Sterling Alexiou for owners Fung Family Racing and Mermen.

“He’s got a pretty stout pedigree and he has shown his liking for the wet tracks,” Alexiou said. “He looked the winner about 300 metres out, but he had to sustain a bit of a slog with one to the line. It’s good for him to get a win.

“As long as he comes through today well, he will probably back up in the Sires’. He’s copped his racing very well on these wet tracks, so I would be surprised if he didn’t come through this well.”

"As long as he (Williamsburg) comes through today well, he will probably back up in the Sires’." - Sterling Alexiou

Since winning the Mornington Cup in March of last year, the Michael, Wayne and John Hawkes-trained gelding had finished outside the placings behind the likes of Mo’unga (NZ) (Savabeel), Incentivise (Shamus Award) and Verry Elleegant (NZ) (Zed {NZ}) in the G1 Winx S., Makybe Diva S., Turnbull S. and Chipping Norton S.

Mount Popa hinted at a return to top form with a strong last-start second in the G3 Sky High S., and on Saturday he delivered with a narrow win over Polly Grey (NZ) (Azamour {Ire}).

“He has been racing in very good company,” Michael Hawkes said. “Today, it wasn’t really about the company – it was about the track and just trying to get through it. I really don’t think he liked it personally, he was dipping and diving a little bit there over the back, but he’s got the job done. Onwards and upwards now. It was a great effort.

“I’ve got to give Willie (William Pike, jockey) credit, he actually rode a really good race. He just popped off at the right time at the 700 (metres). The horse is third-up on a Heavy 20, it’s pretty painful out there, and the last 50 to 100 metres was a slugfest.

"I’ve got to give Willie (William Pike, jockey) credit, he actually rode a really good race. The horse (Mount Popa) is third-up on a Heavy 20, it’s pretty painful out there, and the last 50 to 100 metres was a slugfest." - Michael Hawkes

“He probably started knocking up a little bit, but to his credit, he actually still fought hard and got the job done. A lot of these Europeans just take time. We are still learning about them, obviously he’s got a lot of upside.”

Four in a row for Crystal Pegasus

The Chris Waller-trained gelding, purchased for 190,000 gns (AU$355,000) at the 2020 Tattersalls Autumn Horses in Training Sale, began his Australian career last April and picked up only one win and one placing from his first six starts.

But the 5-year-old resumed with a second-placing at Rosehill in January and has never looked back since, stringing together four super-impressive victories including a last-start 5l romp in the Listed Roy Higgins Quality.

“The Mornington Cup is a great race now,” winning jockey Craig Williams said. “The Melbourne Racing Club, in conjunction with the Mornington Racing Club, have made this an exempt-ballot race for the Caulfield Cup, and it’s now a target race. It’s also two weeks before the Sydney Cup, and this is a lovely imported horse they have been developing and he’s really starting to hit his straps now.

“This is my first time on this fella, and it’s good to get to understand his characteristics, but he’s in really good form. It’s not easy to win four in a row, two Listed races and the Mornington Cup around this track. He’s a willing competitor and it was good to be on him.

“From what he’s done now, I think he will really springboard going into the spring, and he’s an exciting staying prospect – not only for the spring, but right now.”

“From what he’s (Crystal Pegasus) done now, I think he will really springboard going into the spring, and he’s an exciting staying prospect – not only for the spring, but right now.” - Craig Williams

Moroney and Moloney do it again

Two weeks after teaming up for the 100-to-one shock win by Roch ‘N’ Horse (NZ) (Per Incanto {USA}) in the G1 Newmarket H., trainer Mike Moroney and jockey Patrick Moloney have done it again with another New Zealand raider.

This time they teamed up to take out Saturday’s Listed Neds Hareeba S. at Mornington with Not An Option (Not A Single Doubt), carrying the colours of Cambridge Stud owners Brendan and Jo Lindsay.

The winner of the G2 Wakefield Challenge S. in New Zealand as a 2-year-old, Not An Option had shown glimpses of his talent on Australian racetracks with placings in the G3 Kindergarten S. and Winx Guineas.

Saturday’s feature was his first start since finishing ninth at Flemington in September, and he was gelded in between times. The 4-year-old was right on top of his game this time around, taking control at the top of the straight and holding out the challenge of Superium (Verrazano {USA}) by 1l.

“He had one run for Mike prior to today and I rode him, and he went around like a lad,” Moloney said. “He had a nice run, but didn’t want to let down for me. The owners were good enough to bite the bullet and geld him, and he’s come back a much more rounded animal.

"He was up to the task today, he’s a quality animal, and it’s good to see him get the job done first-up. It looks like he’s in for a nice campaign.”

Virtuous Circle was lining up for the second start of his career, having finished ninth on debut at Pakenham in February. The extra 300 metres of Saturday’s race made a world of difference to the 2-year-old colt, who defied 60-to-one odds for a 0.1l victory over the favourite Do It La (Shalaa {Ire}).

“He had come on well from his debut run and I knew he would run well,” Howley said. “This bloke has continued to improve, and there is no excuse to stop on him. He eats everything in sight, he’s a beautiful mover. We call him Kobe internally, because he’s the rockstar of the operation.”

A half-brother to Danger Strykes (NZ) (Astern), who was a Listed winner as a 2-year-old in New Zealand last season, Virtuous Circle was a $360,000 purchase by Liam Howley Racing, Andrew Williams Bloodstock and Bevan Smith Bloodstock from the draft of Wentwood Grange at the 2021 Inglis Classic Yearling Sale.

“We went to market to buy the horses we wanted,” Howley said. “That was the motto going in, and we’ve had some great support from some great clients.”