9 min read
Next week's Tattersalls December Mare Sale at Newmarket will feature 81 fillies and mares offered as part of a major reduction of Shadwell's European breeding stock. TDN AusNZ's Bren O'Brien caught up with Shadwell Racing Manager Angus Gold to talk through the opportunities on offer to buyers, the strength of the Northern Hemisphere mares' market and to highlight a handful of lots he believes will attract interest. 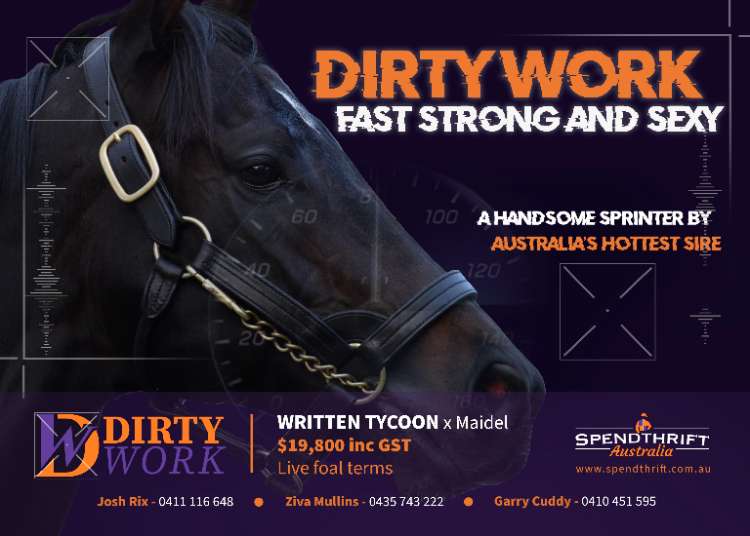 Earlier this year, Shadwell's dispersal of much of its Australian breeding and racing stock was enthusiastically met by buyers in the market, highlighted by its 37-lot offering through the Magic Millions National Broodmare Sale, which saw over $25 million spent on mares in the space of a spectacular 90 minutes on the Gold Coast.

While it has wound down its operations in Australia and South Africa, Shadwell, now led by Sheikh Hamdan’s daughter Sheikha Hissa, plans to maintain its racing and breeding presence in Great Britain, Ireland and the United States, but at a lesser scale, focussed on their stallion operations and high-end breeding and racing prospects.

That has prompted a broad reduction of the Shadwell broodmare band with its Derrinstown Stud selling 40 mares in Ireland last week as part of the Goffs November Breeding Stock Sale.

The Tattersalls December Mare Sale, which starts on November 29 and will run until December 2, initially catalogued 93 mares and fillies from Shadwell, although withdrawals have brought that number back to 81.

Long-time Shadwell Racing Manager Angus Gold, who has helped oversee the restructure of the global business, told TDN AusNZ that the reduction was another terrific opportunity for the global market to access families which Sheikh Hamdan has been nurturing for generations.

"Obviously, for very sad reasons, this is a real opportunity for people to get involved in some of these families. Some of them go back to the early days of Sheikh Hamdan's involvement with horses like Height Of Fashion and the Mehthaaf, Elnadim and Elle Seule family. They are some of the families we have had a lot of luck with over the years," he said.

"Obviously, for very sad reasons, this is a real opportunity for people to get involved in some of these families." - Angus Gold

"We sold quite a lot of mares in Ireland last week and they sold well on the whole and I'm sure this will be no different. We would have been retaining these families if it wasn't for Sheikh Hamdan dying."

Gold said that interest ahead of the Sale in the Shadwell consignment has been on a global level, and he expects the array of elite-quality mares to find their way to a host of different homes.

"If they have got fillies off the track, they can cover them Northern Hemisphere time and foal them here and bring them down. There are a lot of options for them."

The experience of those who invested in the Australian sales earlier this year was an excellent example of the host of options on offer with these mares, says Gold.

High-profile mares such as Group 1 winner Qafila (Not A Single Doubt), who sold for $2 million in May and was booked to Wootton Bassett (GB) this spring, have continued their breeding careers, but others, such as the filly Minhaaj (Exceed And Excel), who cost $1.8 million, have been put back into work.

Gallery: A few of the Shadwell mares sold in Australia

Now a 4-year-old, she has won two Group 3 races this spring for her new owners at Rosemont Stud and trainer John O'Shea.

"It was great to see her go on and win a couple of Group races and hopefully she is not finished yet. It's important for us to see them go on and do something for their new owners," Gold said.

"It was great to see her (Minhaaj) go on and win a couple of Group races and hopefully she is not finished yet." - Angus Gold

"Hopefully plenty of these mares will go on and breed some lovely horses. These are mares we wouldn't be thinking of dispersing in normal circumstances but we have to get down to manageable numbers."

Gold was kind enough to highlight several mares and fillies which he thought would do well out of the Shadwell consignment at Tattersalls, as well as a couple which had a connection to Australia.

"She's one of the best mares we are offering. She won a Listed race at Yarmouth and at her last start she was third in a Group 1 at Longchamp. We asked Sheikh Hamdan to keep her in training at four, but he wouldn't do it and I have no doubt she would have been Group 1 class. She could have won a proper race.

"Her first two foals had a couple of minor issues but Moshaawer, the Frankel colt, is quite a nice horse. The Dubawi filly, the 2-year-old Al Husn, won well at Kempton the other day. We are keeping her in training next year. The Shamardal yearling is not a bad sort at all and this is a lovely mare to look at.

"Hathrah, her dam, was almost the most beautiful filly I have been involved in buying. She was an absolute queen and was third in the 1000 Guineas and won a Listed race by 9l. She’ll be one of our top sellers and rightly so, she is a lovely mare."

"She is quite a small filly and was a first foal herself of Adool. The 2-year-old out of Adool, the Sea The Stars colt Antarah, he won his only start pretty impressively at Newcastle recently. He would be, on the face of it, one of our more exciting young horses, in terms of a potential Classic horse for next year.

"There is another Sea The Stars colt, who is a yearling and quite a nice Lope De Vega filly to come through. She is back in foal to Sea The Stars.

"The first three dams are all stakes winners and it's been a good family to us. You look at horses like Mehthaaf and Elnadim among others, it’s been very successful. She's a bit neat herself, but I would think the family will only improve and there is upside there."

"This mare had issues and never went into training, but her first foal wasn't a bad sort and her second foal, by Tamayuz, looks a very good sort. She is by Sea The Stars, who I am sure will be a fantastic broodmare sire.

"She is out of Eswarah, who was an Oaks winner. This mare is closely related to the filly Raabihah, who is also by Sea The Stars and has run in the last two Arcs. She was fifth in the Arc last year and unlucky not be closer. She was second in the Vermeille, the Group 1 and was a very good filly for us.

"The first few foals out of this mare look pretty nice."

"She's a Frankel mare in foal to Blue Point. She is from the family of Shraaoh as well as Raheen House and both won decent races in Australia.

"She's out of a fast mare, who won the Queen Mary. She has been a slightly disappointing producer Maqaasid, but she was very fast. She carried her speed and was third in the 1000 Guineas.

"It is the sort of family that could see a good mare come out of it and this Frankel was not a bad sort herself. She is in foal to a fast and tough horse in Blue Point."

"She is unraced still, and had a stress fracture of her tibia, which is nothing too major. She's a half-sister to Turaath, who won the G2 Let’s Elope recently. She was a beautiful filly we sold last year. She had a few little hiccups here, and she used to hang a bit and they could never work out why, but obviously, they have managed to iron that out in Australia. It’s fantastic to see her win a Group 2.

"Her first and second dams are both stakes winners and this is a family that will only improve. We have got a nice Dubawi colt foal out of the mare and we will be keeping him. The dam is in foal to Mohaather."

"She is out of the Australian-bred filly, Entisaar, who we bought in Sydney and took to South Africa where she was Champion 2-year-old. Eventually we repatriated her to Europe. She had the Muhaarar gelding Maraakiz, who won his first start and then had a few issues.

On a more general level, Gold expects the Tattersalls December Sale to be very strong, off the back of good results elsewhere through 2021.

"I don’t see why not. It was very strong in Ireland on the whole. The global market, considering the state the world is in, has been remarkable this year, both in the Southern and Northern Hemisphere," he said.

"The global market, considering the state the world is in, has been remarkable this year, both in the Southern and Northern Hemisphere." - Angus Gold

"Even for yearlings up here, it was pretty strong, considering how much everyone was worrying about prizemoney levels, and the fact we have lost Sheikh Hamdan. People were saying, 'who will buy those horses?' but it represented an opportunity for new people to come in with great effect.

"It was a surprisingly strong yearling market, compared to what some people thought it might be. There is every reason to think this will be a strong market too."