11 min read
Te Akau Racing's David Ellis continued his strong affiliation with the progeny of Champion Sire Savabeel, topping a positive first day of the New Zealand Bloodstock Ready to Run Sale by paying NZ$640,000 for a colt out of the draft of Ohukia Lodge.

The 'virtual' format of the Sale, which was staged at Te Rapa racecourse with no horses present, did not discourage either domestic or overseas buyers, who drove strong results.

The clearance stands at 65 per cent, down on last year, but with the likelihood of further sales of passed-in lots.

There was a strong Australian buying bench of close to 20 individual buyers, with McEvoy Mitchell Racing paying NZ$330,000 for a colt by Almanzor (Fr). 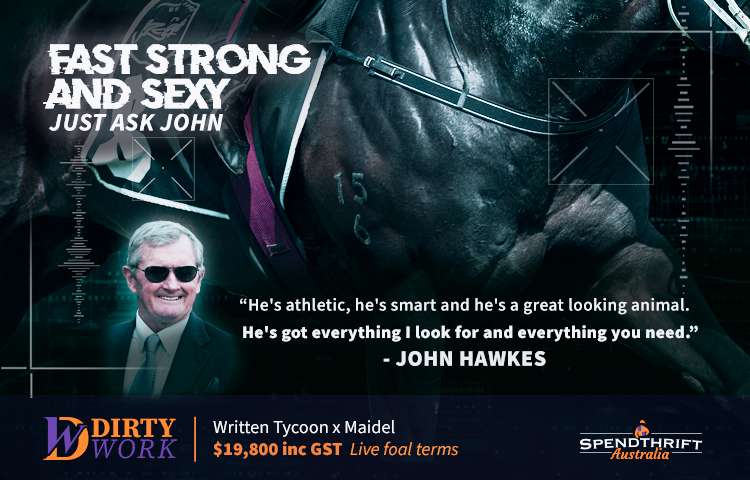 It was David Ellis who topped this Sale when going to NZ$700,000 for a Savabeel colt last year and it was the same formula again for the Te Akau boss as he paid NZ$640,000 for Lot 107, from the draft of Ohukia Lodge.

The colt, bred and owned by Waikato Stud, is a brother to Milford (NZ), who is a Listed winner and was runner-up in this year's G1 New Zealand Derby for Stephen Marsh.

Ellis and Te Akau have had a great association with Savabeel's progeny, most recently with Noverre (NZ) who won the G1 2000 New Zealand Guineas earlier this month.

"We just love the Savabeels. He's just an incredible sire. It's fantastic for New Zealand to have a sire of his quality and we just can't get enough of them in the stable," he said.

"We just love the Savabeels. He's just an incredible sire. It's fantastic for New Zealand to have a sire of his quality and we just can't get enough of them in the stable." - David Ellis

"This horse has a lot of class and reminds me a lot of Noverre. I think he'll be a star on the racetrack too.

“He is from a lovely family, from a great farm, and we are pretty excited to have him in the stable."

Ellis doubled down on the Savabeel formula by paying NZ$340,000 for Lot 114, the colt from Riverrock Farm out of the Fastnet Rock mare Fast Company.

The nick of Fastnet Rock mares with Savabeel has produced six winners from eight runners, including the stakes winners Kaonic (NZ) and Hindaam (NZ) and Ellis will aim to continue that success with the colt.

"That colt is a miler type and you could see him being in Group 1 races in the next month for certain," he said.

"That colt (Lot 114) is a miler type and you could see him being in Group 1 races in the next month for certain." - David Ellis

Fast Company, who was purchased by Bruce Perry and this colt's breeder Jamieson Park for $230,000 at the 2018 Magic Millions National Broodmare Sale, is a sister to Group 2 winner Valentia from the family of Group 1 winner Super Elegant (Mister C {USA}).

“With the stakes money increases at Ellerslie and other good news being announced from other clubs in months to come, there is a lot of demand from people who are wanting to be involved in Te Akau Racing,” he said.

The expectations were already strong for Lot 44, the Deep Field colt from Riversley Park, before he 'stepped' into the virtual sale ring after a strong breeze of 10.80s at Te Rapa last month.

His Newgate-based sire is creating quite the record in Hong Kong, with 13 winners in total and it was no surprise to see him heading off to that destination when trainer Jimmy Ting won the day, paying NZ$470,000 for the privilege.

Ting, working with Hong Kong agent Willie Leung for a Hong Kong-based client, was delighted with his purchase.

“The Deep Fields do very well in Hong Kong,” Ting said. “His breeze up was good, he has a big stride, he is a very strong horse, and his action is good, so I tried to buy him.

“I am very lucky that the buyer could buy him.”

Ting is yet to decide when the colt will make his way north to Hong Kong.

“I need to talk with the owner to see whether he comes straight back to Hong Kong or stays in New Zealand for a few months,” he said.

The colt is out of the Pins mare Bang On (NZ) and is a half-brother to two winners. That is the extended family of stallions Ocean Park (NZ), O'Reilly (NZ) and Grunt (NZ).

The colt was purchased for $125,000 by Riversley Park from the Evergreen Stud Farm draft at the 2021 Magic Millions Gold Coast Yearling Sale, giving the Sam Beatson-run farm a near 400 per cent return on their investment.

"That was at the top end of what I expected. I pinhooked him myself so he was on the market well before then and with these good colts, people just seem to want them," Riversley Park's Sam Beatson said.

"I pinhooked him (Lot 44) myself so he was on the market well before then and with these good colts, people just seem to want them." - Sam Beatson

"The agents have said they have been getting their lists through and everybody seems to want the same horses."

Another Hong Kong trainer, Me Tsui, won out in the battle for another son of Deep Field, Lot 64, who was offered by Regal Farm and sold for NZ$350,000.

A $70,000 purchase through the Inglis Classic Sale in February, where he was offered by Lime Country, he went for five times that amount in a spirited bidding battle.

He is out of the unraced Fusaichi Pegasus (USA) mare, Carlina, who is sister to the dam of Group-winning siblings Hawkshot (Fiorente {Ire}), who raced in Hong Kong, and Power Scheme (Fiorente {Ire}).

McEvoy Mitchell Racing and bloodstock agent Bevan Smith went to NZ$330,000 to secure Lot 12, a colt from the first crop of Cambridge Stud's Almanzor (Fr) early in the session.

Offered by Janine Dunlop’s Phoenix Park, he had breezed up in 10.68s and is out of the winning Guillotine (NZ) mare Tricoteuse (NZ), whose dam is a half-sister to the G1 New Zealand Thoroughbred Breeders’ S. winner Arlingtonboulevard (NZ) (Spinning World {USA}).

"I was quite taken by that little breeze that he did,” McEvoy said. “He looks a proper horse to me.”

McEvoy purchased the colt on behalf of an undisclosed Queensland-based client and will wait until he inspects him further before he plots a racing path.

“It’s difficult not having seen him in the flesh, although the New Zealand Bloodstock and vendor services we get are fabulous,” he said. “As with any horse though, you’ve got to get up close with them and I’ll get him to Ballarat and then make some calls from there.”

It continues the strong start for Almanzor, who was the leading first-season sire across several sales in Australian and New Zealand yearling sales earlier in 2021.

“I can see why people like them, he was such a good horse and he’s on a good farm and getting every chance. I’m very pleased to be able to get one, that’s for sure,” McEvoy said.

"I can see why people like them (the Almanzors), he (Lot 12) was such a good horse and he’s on a good farm and getting every chance. I’m very pleased to be able to get one, that’s for sure." - Tony McEvoy

Dunlop was rapt with where the horse found itself in the market.

"The x-ray hits were just phenomenal on the horse. He had been vetted and paraded that many times," she said.

"There was an element of surprise and I think it was a tremendous result for the horse, but on saying that, the interest had been there. It was pretty exciting, and my owner Geoff Taylor was thrilled with the result."

Octagon Bloodstock had originally purchased the colt out of Curraghmore’s draft at New Zealand Bloodstock’s National Yearling Sale at Karaka earlier this year for NZ$260,000.

While border closures kept Australian buyers from attending the Sale, it did little to dissuade them from participating.

Warwick Farm-based trainer Annabel Neasham paid NZ$310,000 for Lot 139, a colt by Per Incanto (USA), from the draft of Riversley Park.

Per Incanto has strong currency in the Australian market at the moment, mainly through stakes-winning sprinter Lost And Running, who won the $1 million The Hunter last Saturday, and Neasham was happy to secure his son, who is out of O'Reilly (NZ) mare Great Expectations (NZ).

New Zealand ex-pats Trent Busuttin and Natalie Young, now based at Cranbourne, have been historically strong supporters of this Sale and purchased four 2-year-olds for a total of NZ$720,000 on the opening day.

That included Lot 73, a colt by Sacred Falls (NZ) out of Savabeel mare Cheryl Moana Marie (NZ) from the draft of Ohukia Lodge for NZ$300,000. His dam is a sister to Listed winner and Group 1 placegetter Atmosphere (NZ), who Busuttin and Young had sourced out of the same Sale eight years ago.

"We've had a few of them (Sacred Falls) in the stables and they are obviously from the great farm at Waikato. He was such a good stallion himself, it’s a shame he is not still around," Busuttin said.

"We've had a few of them (Sacred Falls) in the stables and they are obviously from the great farm at Waikato." - Trent Busuttin

Other notable Australian-based trainers on the buyers' list included Kacy Fogden, Bjorn Baker and Chris Wallers, who purchased Lots 9 and 10 in partnership with Mulcaster Bloodstock.

A strong and smooth start

New Zealand Bloodstock sales representative Kane Jones said given the difficulties of logistics ahead of the Sale, the first day had gone very smoothly.

"We were certainly heading into uncharted territory today. It was a bit of the unknown, but I was just rapt with how the day went and the day warmed up really, really nicely," he said.

"We saw strong activity online, on the phones with all our agents and that was complemented by some good action in the room here."

"It was a bit of the unknown, but I was just rapt with how the day went and the day warmed up really, really nicely." - Kane Jones

Jones said the virtual format had held up well from a technology perspective, ensuring a level playing field for bidders, be they in person, on the phone or online.

"We know it's a world-class system and to have so many online bidders and from all around the world, we know they have confidence in that system and it’s a real asset," he said.