6 min read
When Rhys and Chloe Smith of Kulani Park let their kids name a colt by Flying Artie after an NBA MVP nicknamed the 'Greek Freak', it was a fair reflection of the opinion they held him in. Now Giannis is set to tackle the G1 Golden Rose S. after breaking through for his maiden win in Saturday's Listed Dulcify S.

Having purchased Giannis for $67,500 as a foal, the Smiths decided to retain him when he failed to reach their reserve of $200,000 through the Kulani Park draft at the 2020 Magic Millions Gold Coast Yearling Sale. 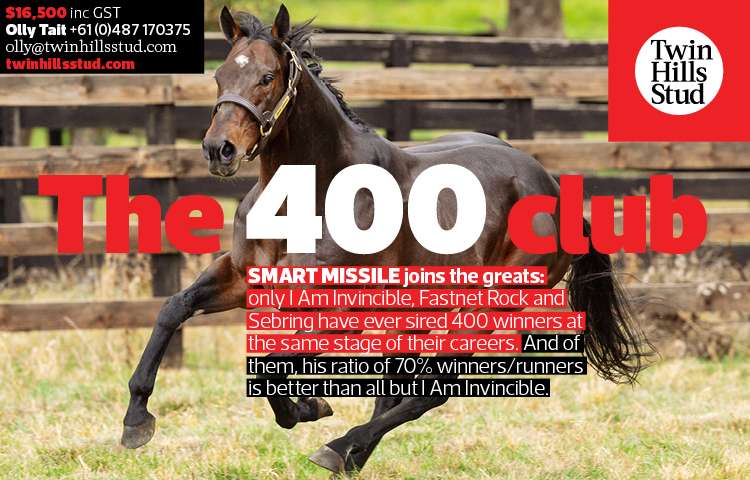 Rhys Smith pinhooked future Group 1 winner Zoustar as a yearling and so he knows a thing or two about identifying and working with talented youngsters and it was that experience which shaped his decision to stick with the Flying Artie colt.

"He was always a good mover. He had a good nature and he did all the things we look for when we are buying them as foals," Smith told TDN AusNZ about buying the colt from the Sledmere Stud draft at the 2019 Magic Millions National Weanling Sale.

"It was funny at the yearling sales, I thought he was going to be sold and then he couldn't get a bid. When he passed in, they all came back and made offers, but we just decided to keep him.

""We pinhooked Zoustar as well and we sold him, and so we thought in the circumstances, we’d keep this horse and see what happens

China Horse Club had purchased Palace Rock as a maiden mare for $260,000 through the 2017 Magic Millions National Broodmare Sale and she visited then first-season Newgate stallion Flying Artie in her first season.

Fresh on the 3-year-old scene

The resultant colt has now emerged as one of the fresh faces in a very strong crop of 3-year-olds destined for the G1 Golden Rose S., scheduled at Rosehill on September 25.

"It was a fantastic win. We thought he could do it, but it was just good to see him go out there and perform like that." - Rhys Smith

"You just want to see him go out and do it. We’ve got high hopes for the horse. We can push forward now in the knowledge we have a good horse and we are a chance now in whatever he runs in."

Ever since sending the colt to Waller, the Smiths have been guided by his assessment of the horse and the fact the Champion trainer saw fit to debut Giannis in a Group 3 race, the Canonbury S. as a 2-year-old, was a positive sign.

He would run fifth in that first start, beaten only 1.5l, and after running third to subsequent G1 Golden Slipper S. winner Stay Inside (Extreme Choice) in the Pierro Plate, the decision was made to target the feature 2-year-old races in Brisbane.

"Chris has taken a similar path with Zoustar, The Autumn Sun and Press Statement. He seems to know the horses it works well with. It really helps to develop them and turn them into racehorses," Smith said.

Giannis' first run in Queensland saw him run off his feet in the 1200 metre G2 Champagne Classic, where he finished seventh. He showed improvement into the G2 QRC Sires' Produce S. when fifth and the decision was made to test him at Group 1 level in the G1 JJ Atkins S.

Stepping to 1600 metres for the first time, the colt caught the eye, finishing hard for second, some 3.3l adrift of impressive winner Converge (Frankel {GB}).

"Chris thinks he's a proper horse and it’s taken a little bit of time for the penny to drop. When he originally went to Queensland, he wasn't quite right and that's why it took us until he got to the JJ Atkins to show his best form. They've liked him right the way through," Smith said.

A short spell and two strong trials gave every indication that the Brisbane education had worked for Giannis.

"He was never what you would call a typical 2-year-old. We always expected to see him improve off that campaign. The feedback we got was that he had definitely improved off that break and turned into a racehorse," Smith said.

"He (Giannis) was never what you would call a typical 2-year-old. The feedback we got was that he had definitely improved off that break and turned into a racehorse." - Rhys Smith

A first-up assignment at 1500 metres was not a typical build-up to an anticipated Golden Rose start, but Smith backed in Waller's judgement and experience.

"He was also entered into the Run to the Rose and so they were tossing up whether he would go in that race or the Dulcify, but Chris started The Autumn Sun in a similar race before he went on to win the Golden Rose," he said.

The Autumn Sun contested the G2 Stan Fox S., a 1500 metre 3-year-old race, on the same raceday for Waller in 2018. Interestingly, it was the only defeat of his nine-start career.

The Dulcify has been a Listed race contested over various distances over the years. For past eight seasons, it has been a 1600-metre race and last year was won by subsequent Group 1 winner Mo'unga (NZ) (Savabeel). Saturday's 1500-metre event was the shortest distance the race has been contested over in its history.

The tough first-up victory does raise the question of which distance Giannis is best suited over.

While he will contest the G1 Golden Rose next, Giannis also holds nominations for the G1 Caulfield Guineas and G1 Cox Plate, races Waller is no stranger to winning.

"I would think 1400 metres to a mile is his best range. He (Giannis) might get further, but I'm not sure he’ll get the chance to do that," Smith said.

As for the name, well the kids may have given Giannis something to live up to. His namesake Giannis Antetokounmpo, who is nicknamed the 'Greek Freak', is twice an NBA MVP and lifted his Milwaukee Bucks to the recent NBA Championship. With Saturday's win, the equine version is pulling his weight.

"It seems quite a good name now," Smith said.