In Melbourne, The Inferno (Holy Roman Emperor {Ire}) is looking for a slot in The Everest after providing his trainer Cliff Brown with his first Stakes win as a trainer since returning to Australia, while Superstorm (Sebring) has secured his G1 Cox Plate berth.

Mascarpone (NZ) (Shooting To Win) posted an upset result when he successfully resumed in the G2 Valachi Downs Foxbridge Plate.

Imperatriz (I Am Invincible) maintained her perfect record from three appearances when the filly proved too good in the G3 Cambridge Stud Northland Breeders’ S. 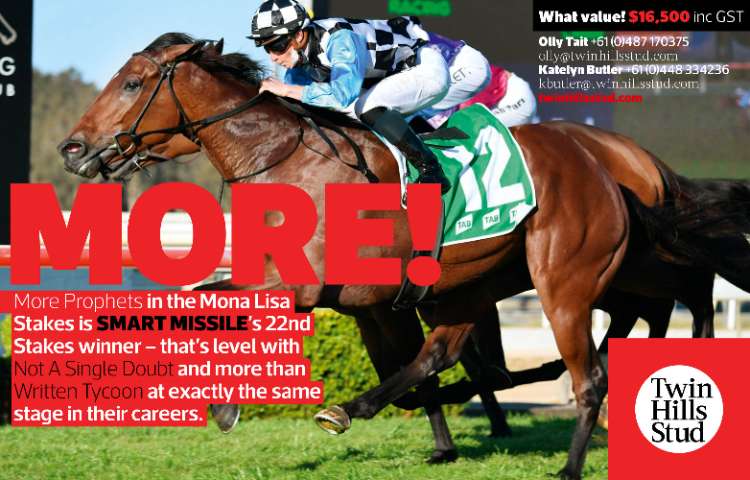 Stroll in the park

Zaaki (GB) (Leroidesanimaux {Brz}) was the headline act of the Queensland winter and he promises to continue his carnival heroics in the coming months after destroying his rivals in the G2 Tramway S. at Randwick.

He reeled off three effortless wins in Brisbane, including a 7I victory romp in the G1 Doomben Cup, and picked up on Saturday exactly where he left off, strolling home under James McDonald, who barely moved a muscle.

“It’s a bit of a relief to tell the truth. I knew he was going well but the worry was that the distance would be too short,” trainer Annabel Neasham said. “There is plenty of improvement to come and he should be in for a good campaign.”

That might prove a major understatement with the G1 Cox Plate the end goal, but how he gets to the weight-for-age championship is still to be determined with COVID restrictions on travelling staff a concern.

“Anyone could have won on him (Zaaki). He was electric and put a good field to shame." - James McDonald

“He could go to a mile next or 1800 metres in the G1 Underwood S., there’s a few logistics to be worked through,” Neasham said. “We’ll let the dust settle and see how he comes through this.”

Zaaki settled in fifth spot off the fence and improved wide across the top. Under minimal urging he strolled to the front 250 metres from home and it was game over.

“Anyone could have won on him. He was electric and put a good field to shame,” McDonald said. “He’s a very confident horse and I just hope the borders open up.”

As he was eased up across the line, Zaaki’s 1.5l winning margin flattered runner-up Aramayo (Poet’s Voice {GB}) with Star Of The Seas (NZ) (Ocean Park {NZ}) back in third.

Jamaea (Headwater) didn’t have a lot of luck in her first appearance as a 3-year-old but she showed her true colours at Randwick on Saturday when storming to victory in the G2 Darley Furious S.

The Robert and Luke rice-trained filly had finished a close fourth when resuming in the G2 Silver Shadow S. and following rider Tommy Berry’s suspension out of the race, stable apprentice Brock Ryan was handed the reins.

He repaid the favour with a cool ride to get Jamaea to the outside and the talented Headwater filly mowed down her rivals to land top honours in the second race of the Darley Princess Series, and secure Ryan with his first stakes victory.

“She is going super, even better than she was as a 2-year-old. The way her racing pattern is going these days, I think there is no problem going further,” Ryan said.

“She (Jamaea) is going super, even better than she was as a 2-year-old." - Gerald Ryan

The Cressfield graduate now has a pair of Group 2 victories to her credit, having triumphed in last season’s G2 Percy Sykes S.

Longshot Robodira (Husson {Arg}) was a close second ahead of Mallory (Not A Single Doubt), who made ground strongly, and the front-runner Enterprise Pomme (Spill The Beans) fought on gallantly for fourth.

Plenty to come from ace sprinter

Trainer Chris Waller sounded an ominous warning to his rival trainers when he announced Nature Strip (Nicconi) would derive immense benefit from his victory jog in the G2 TAB Concorde S. at Randwick.

Nature Strip opened his preparation for the $15 million The TAB Everest in blistering fashion when he made all the running and when rider James McDonald slipped him more rein he waltzed away to down Wild Ruler (Snitzel) and Trekking (Street Cry {Ire}).

“He’s a pretty relaxed and a cool customer these days. He had a good build-up without changing anything and racing will bring him on,” Waller said. “He will improve significantly.”

Waller didn’t issue McDonald with any precise riding instructions for the multiple Group 1 winner and the chestnut strode to the front with ease.

“I just said to James to let him do his own thing and don’t worry about anything else. He’s a little bit more versatile and he doesn’t have to run a 1000 miles an hour and break their hearts,” he said.

“He has come back so well and has had a trouble-free preparation and is racing more tractably. It was great to see him show that acceleration.”

Think It Over (So You Think {NZ}) will head back to Group 1 company following a dogged win in the G2 Heineken Chelmsford S. at Randwick.

Last season’s G1 George Ryder S. winner raced in behind the pace on the fence and once into the clear at the top of the straight he set out after the freegoing Riodini (NZ) (Proisir).

“It was a good tough win, but I thought he would pick the inside horse up a lot better so all credit to him (Riodini),” trainer Kerry Parker said.

Think It Over’s next assignment in a fortnight’s time will be the G1 George Main S.

“There will be a few more good ones in that. I think there is a bit of improvement in him, but there will need to be as he’ll have to keep stepping up,” Parker said.

Riodini was a gallant second with Montefilia (Kermadec {NZ}) producing an encouraging first-up effort by making ground strongly for third.

Superstorm (Sebring) prevailed in a stirring edition of the G2 Feehan S. at Moonee Valley to earn a free passage into the G1 Cox Plate.

The Bob Peters-bred and owned 5-year-old finished resolutely along the rail for Damien Oliver to prevail by a narrow margin and inflict a first defeat on a gallant Elephant (NZ) (Shocking).

“It was always going to be a difficult map for him and he hasn’t got a lot of gate speed, so we would definitely have liked to have been three wide,” trainer Danny O’Brien said.

“The fence hasn’t been the place to be all day and he’s still got home so the run was full of merit. He came to us in fantastic order from WA and we knew there would be good improvement from his first-up run.

“Bob Peters will decide where he is best-placed for his next run, but I suspect it will be in the G1 underwood S., that’s the logical race over 1800 metres.”

Trainer Cliff Brown believes The Inferno (Holy Roman Emperor {Ire}) wouldn’t be out of place in the $15 million The TAB Everest.

He made a case for the sprinter following a satisfying success at Moonee Valley in the G2 Mitty’s McEwen S., off the back of an unplaced run at his Australian debut that Brown took the blame for.

“I think he (The Inferno) could be an Everest horse, he likes it firm or dry and I think he could be a smokie for the race." - Cliff Brown

The Inferno was Brown’s star performer during his lengthy training stint in Singapore with multiple Listed victories among his eight wins from nine appearances.

On his return to Victoria, The Inferno took pride of place in the Mornington stable, but his first-up failure in the Listed Regal Roller S. was down to trainer error.

“I had him too big and there was plenty of improvement. I hadn’t done enough work with him,” Brown said. “This is really great and I told some close mates that this is the best horse I’ve ever had.”

The Inferno travelled off the pace on Saturday before improving around runners and swung widest into the straight under rider Damian Lane before rounding off strongly to beat the resuming Portland Sky (Deep Field), who lost no caste in defeat.

Mascarpone (NZ) handed his Darley-based sire Shooting To Win his most important sire success to date when upsetting a competitive lineup in the G2 Valachi Downs Foxbridge Plate at Te Rapa.

The Gerry Harvey-bred gelding has long been held in high regard by trainer and part-owner Graeme Rogerson, and the chestnut with the extravagant action delivered with a strong win.

“He must have good ground and he’s far better going left-handed,” Rogerson said. “He trialled about three weeks ago and beat a good field out of sight, so he was certainly going to be a big chance in the race after he drew a good alley.”

Mascarpone was ridden by Ryan Elliot, who settled him behind the pace and when the gaps opened in the straight he was a willing partner. He led 150 metres from home and held out the fast-finishing Gino Severini (Ire) (Fastnet Rock).

Imperatriz (I Am Invincible) kept her unbeaten record intact with a fresh victory in the G3 Cambridge Stud Northland Breeders’ S. at Te Rapa.

Successful on debut at Otaki and then in the G2 Eclipse S., the short-priced favourite played up during her preliminary but was all business when the gates opened and she sat one off the fence in third spot.

Her stablemate I Wish I Win (NZ) (Savabeel) raced outside of the leader and hit the front 200 metres from home before Imperatriz responded to rider Danielle Johnson’s urgings and proved superior in the closing 50 metres.

“She was given a lovely ride by Danielle, who ended up in the perfect spot, and pinned her ears back and had a go. The second horse, I Wish I Win, is also very good,” trainer Jamie Richards said. “It’s great to be back racing and I’m really happy with the way the team is going.”