12 min read
A Zoustar colt offered by Blue Gum Farm has broken the previous price record for a weanling at the Inglis Great Southern Sale after selling for $360,000 on a strong opening day of trade at Oaklands Junction.

The clearance rate stands at 76 per cent, down from 80 per cent for the select weanlings in 2019, but with expectations that it will improve.

The top-priced Zoustar colt, Lot 227, was purchased from Blue Gum Farm by BBT Breeding and Racing for $360,000. 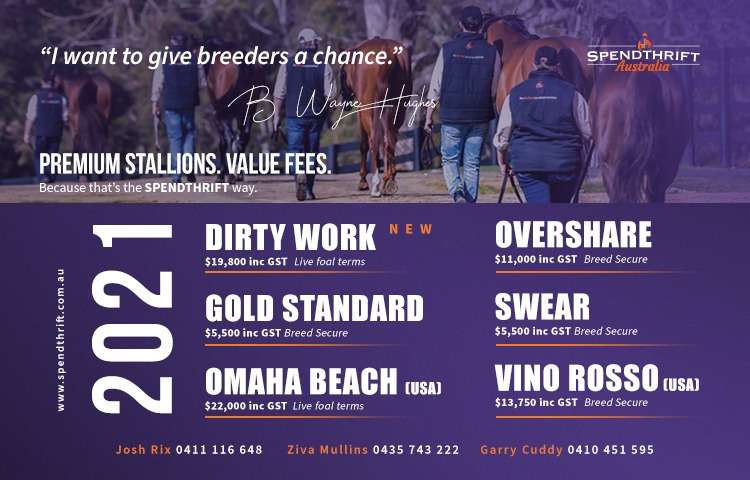 Inglis' Oaklands Junction has provided Blue Gum Farm with some outstanding sales results in the past 40 years and it can add a record price for a Zoustar weanling colt at the Great Southern Sale to its achievements.

BBT Breeding and Racing, which is headed up by successful Bluebloods Thoroughbreds syndicator Carol Walsh, paid $360,000 for the colt who was catalogued as Lot 227, who is out of Group 3 winner Vergara (Snippetson).

Blue Gum's Philip Campbell said the record price was a reward for his entire team.

“It’s a great result. We’re really rapt for the people back at the farm, especially Wendy Smith our yearling manager and her team, also Stuart Murray who has done all the work with the colt down at the Sale," he said.

“He has paraded so well. He had a ripping pedigree and is a ripping style of colt and we’re absolutely delighted."

“He (Lot 227) has paraded so well. He had a ripping pedigree and is a ripping style of colt and we’re absolutely delighted." - Philip Campbell

Blue Gum topped the Inglis Melbourne Premier Yearling Sale earlier this year with a Written Tycoon colt which sold for $1.2 million and Campbell was once again emotional about this latest record result.

“The first emotion is relief because when you have a colt like that who you think is worth a good quid you’re always very mindful that you have to get him to the ring in one piece and every time he parades you hope he puts his best foot forward and doesn’t turn anyone off," he said.

Blue Gum paid $460,000 for Vergara at the Inglis Sydney Weanling and Broodmare Sale in 2016 and have retained all her foals before the Zoustar colt, including her unraced 3-year-old Focus On Fame (Tavistock {NZ}) and 2-year-old Growl (Written Tycoon).

“We targeted this Sale with this colt, we spent a lot of money on his mother off the racetrack and we’ve kept the first two foals out of the mare," Campbell said.

Vergara is now in foal to Snitzel and will head to Exceed And Excel this year.

A Deep Field half-brother to stakes-placed Shebringzit (Sebring) brought an excellent return of $290,000 for Rushton Park, the highest-ever price for a foal by the Newgate stallion.

Rushton Park's David and Kayley Johnson of Rushton Park have had some excellent sales results this season, and the price for Lot 112, the Deep Field colt out of Passarelle (Not A Single Doubt), was their best-ever result for a weanling.

Signed for by Hunter Valley Bloodstock on behalf of an unidentified 'long-term' client of Inglis, the colt is the most expensive Deep Field weanling ever sold and is likely to be re-offered through the yearling sales next year.

Rushton Park was selling on behalf of Sally Watkins' Willaroon Thoroughbreds, who paid $120,000 for Passarelle in 2015. Among her five foals are the $85,000 Inglis Melbourne Premier Sale graduate, Shebringzit, twice a winner and placed in a G3 Chairman's S.

"It was a fabulous result. He's a very special colt, he’s a great type, vetted well and everyone on the complex loved him," David Johnson said.

“Inspections haven’t stopped since we got here, he had 30 hits on his x-rays which I’ve never had at a sale before. It’s for one of our very best friends in Sally Watkins and she’ll be over the moon with this result.

The colt had a reserve of $120,000, but attracted interest from multiple prospective buyers, and sailed well beyond Johnson's expectations.

The progeny of Extreme Choice, currently the leading first-season sire in Australia, have been in strong demand, especially considering his fertility issues have led to small crops, and that sense of a rare opportunity certainly shined through with Lot 232.

“He’s a typical Extreme Choice, they’re not very big but he’s athletic, correct and a nice walker. So, there looks like a lot of improvement in him," Musk Creek's David Kobritz said.

"There’s also not many Extreme Choices who will go through the sales next year. We will just see how he develops over the next three months but we could go to Sydney or Magics but we will work that out."

Lot 33, the other Deep Field colt, was co-bred by Rushton Park and Willaroon and is out of Le Patron (Street Boss {USA}), a three-time winning half-sister to Listed winner Chantrea (Puissance De Lune {Ire}).

The Great Southern Sale was initially scheduled to take place in mid-June but had been delayed due to Melbourne being locked down during that period.

The fact it was pushed back three weeks had little discernible impact in what proved another strong market.

“There were obviously a few hurdles and I think we’ve had an incredibly successful Sale today and a top price of $360,000 is incredible," Inglis' Victorian Bloodstock Manager, James Price, said.

“Talking to vendors and buyers it is really hard to buy the nice horses at this Sale and that was proven today with many people walking away with nothing."

Price said to see the raw figures in better position than 2019 is a very positive sign.

"Given what buyers and vendors have had to face, to see figures predominantly up on 2019 is a very good result," he said.

“There’s been a lot of anxiety around the Sale and I commend the vendors for their patience and they’ve been rightfully rewarded.

“Tomorrow will continue the strength and looking through the list of nice horses it seems as though there’s even more nice horses to be offered.

“Tomorrow will continue the strength and looking through the list of nice horses it seems as though there’s even more nice horses to be offered." - James Price

“Buyers are certainly keen to return tomorrow and I expect the competition to only get more fierce."

Shrone Bloodstock and Silverdale Farm went to $200,000 for Lot 157, a colt by Arrowfield Stud's Maurice (Jpn) out of Seven Year Itch (Keltrice) from the Rangal Park Stud Dispersal.

Seven Year Itch has already produced two stakes winners in Scratchy Lass (US Ranger {USA}) and Rich Itch (Danerich) as well as three other winners and is out of the extended family of G1 Melbourne Cup winner Viewed (Scenic {Ire}).

“It’s very pleasing for the farm and also Eric Buttler the owner of the horse and the farm, he also bred and raced the mare," Rangal Park's Tim Jackson said.

“He had all the right people looking at him which gave us the indication that we might’ve been on the money and that was the case.

“Good horses will always sell at any sale, there’s too many good judges around and anything that has a bit of substance or a pedigree it will be spotted out. Once the good judges come around and look at your horses you know that you’re going to be on the money.

“Maurice is pretty hot at the moment and they can all gallop. The mare has also done a good job with some lesser stallions previously."

The Sale represents an end of an era for Rangal Park, which has been sold up due to Buttler's ill-health.

“The farm has now been sold up and Eric’s moving onto greener pastures, so I’m just happy for him as he’s been a good, long servant to the racing industry in Victoria," Jackson said.

“The farm (Rangal Park) has now been sold up and Eric’s (Buttler) moving onto greener pastures, so I’m just happy for him as he’s been a good, long servant to the racing industry in Victoria." - Tim Jackson

“Eric has been around for a while and he knows what he’s doing so it’s good to see him get a really good result at the end of his time at Rangal Park."

Jim Carey was the successful bidder on Lot 215, a colt by Darley's Frosted (USA), who has made a strong start with his progeny on the track.

The colt cost $185,000 and was offered by Supreme Thoroughbreds. He is out of Townsings Lass (Foxwedge), the half-sister to multiple Listed winner Cavaloce (Testa Rossa), from the family of G1 Oakleigh Plate winner Reactive (Geiger Counter {USA}).

“The sire has done a good job. He was a quality colt and obviously at Newgate we pinhooked Stay Inside and this lad will go back to the farm then come back to the yearling sales next year and hopefully be pretty popular," Carey said.

“He had a big hip, a good walk and everything that we look for, he comes off a great farm with great people."

Early in the day, Landsdowne Park went to $120,000 for a colt from the second crop of Darley's Impending out of the family of Mizzy (Zoustar), who recently sold for $2.2 million at the Magic Millions National Broodmare Sale.

Esker Lodge offered Lot 15, who secured the same price as it did for his half-brother by Shalaa (Ire) at this year's Inglis Melbourne Premier Yearling Sale.

Their dam, Keltara (Exceed And Excel), is a three-time winning half-sister to Group 2 winner Missy Cummings (Magnus), the dam of Mizzy, and will be pinhooked through the New Zealand Bloodstock Yearling Sale at Karaka in 2022, according to Landsdowne Park's David Duley.

“We’ll take him back to New Zealand and sell him under our Landsdowne Park banner at Karaka," he said

“We’ll take him (Lot 15) back to New Zealand and sell him under our Landsdowne Park banner at Karaka." - David Duley

“Last year New Zealanders couldn't get over from Karaka and see the Impendings and this year I’ve managed to see a few of the foals by him and I’ve been really impressed by his stock.

“I’ve been to all the weanling sales so far and we haven't managed to get anything. So, to get this guy is really good. He will certainly get better as he gets older but he might go a bit earlier. However, we certainly don’t rush them in New Zealand."

The Sale continues from 10am AEST on Monday, with the conclusion of the Select Weanlings, the General Weanlings and then the Great Southern Broodmare Sale.