Rosehill results a big boost for Coolmore in countdown to Easter

The headline act was Saif (Pride Of Dubai), who was a $290,000 purchase by Team Hawkes from Coolmore’s draft at this same sale 12 months ago.

Following a win and a G2 VRC Sires’ Produce S. second placing from two starts in Victoria, Saif starred on his Sydney debut with a powerful victory against a talented lineup in Saturday’s G3 Schweppervesence. 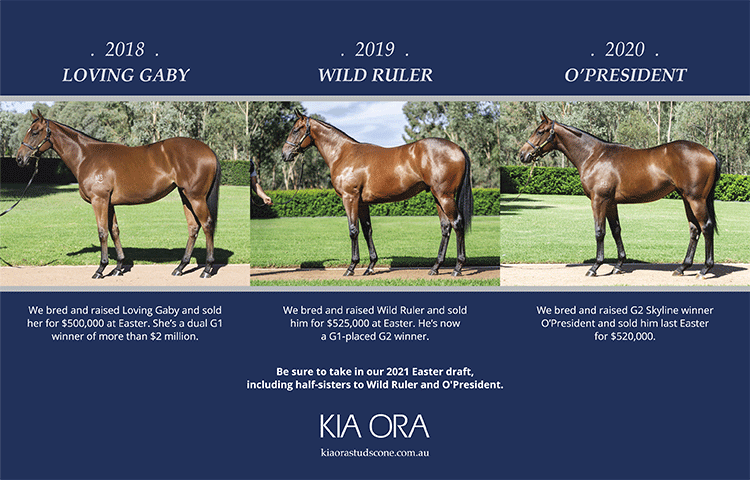 It was a perfect result for the team at Coolmore, who regard Saif’s full brother – Lot 393 at this year's Inglis Easter Yearling Sale as one of the standout members of their 36-strong draft going through the ring at the Riverside Stables this week.

“Saif was an outstanding colt when we presented him at this Sale last year,” Coolmore’s Tom Moore told TDN AusNZ on Sunday. “There was a lot of interest in him, and in the end, he went to a very good stable in Hawkes Racing.

“He won well on debut, and then the Hawkes team thought enough of him to put him in a Group 2 in only his second start, where he produced another very strong performance.

“Now he’s travelled to Sydney and beaten a strong field in his first start there, winning a Group 3 with real distinction. It was fantastic to see.

“We’re very excited to be selling his full brother this week as Lot 393. With that great performance yesterday, the timing really couldn’t be any better.

“We’re very excited to be selling his (Saif) full brother this week as Lot 393. With that great performance yesterday, the timing really couldn’t be any better.” - Tom Moore

“This colt is very much in the same mould as Saif. Apart from the fact that Saif is a chestnut and this colt is a much darker colour, they otherwise share many of the same qualities as individuals. This yearling is a lovely colt and one we’re very proud to offer this week.”

Saif’s heroics on Saturday also provided a further boost for his high-flying sire Pride Of Dubai. He has sired 57 winners from 152 runners, with Saif becoming his eighth stakes winner.

Vancouver coming into his own

Hot on Pride Of Dubai’s heels on those second-season stallion standings in third place, and only $300,000 behind, is his fellow Coolmore stallion Vancouver.

The Golden Slipper winner is an emerging force at stud, now the sire of 62 winners from 138 runners including four at stakes level. The most recent of those came in Saturday’s G2 Tulloch S. at Rosehill, won by Yaletown in Coolmore’s familiar navy-blue colours.

“Vancouver is really starting to come into his own,” Moore said. “Yaletown is the perfect example of that. Gai Waterhouse and Adrian Bott have always had a big opinion of him, and he’s beginning to shine now. We were all very excited to see him win the way he did in the Tulloch on Saturday, and he’s now emerging as a genuine contender for the Derby.

“Gai and Adrian also have the Vancouver filly Vangelic, who’s placed in five stakes races already including the G1 Surround S. and Flight S. She ran an excellent race last start for fourth in the G1 Coolmore Classic, and it would be no surprise to see her strongly competing in big races through the rest of the carnival.”

Buoyed by those recent results, Coolmore will watch with interest as six Vancouver yearlings go through the ring this week, including progeny of Group 1-winning mare Via Africa (SAF) (Var {USA}), the well-bred Marishka (Exceed And Excel) – a sister to Golden Slipper winner Overreach (Exceed And Excel) – and stakes winners Another Coup (NZ) (Darci Brahma {NZ}), and Legible (NZ) (Zabeel {NZ}). The latter is also the dam of Group 1 performer Trusting.

Merchant Navy one to watch

A key point of interest for Coolmore at Riverside Stables this week is the first crop of yearlings by the G1 Coolmore Stud S. and Diamond Jubilee S. winner Merchant Navy, who has already had yearlings sell for up to $500,000 at the Magic Millions Gold Coast Yearling Sale earlier this year.

A dozen sons and daughters of the world-class sprinter will go through the ring this week, including a well-related offering from Coolmore who will be consigned as Lot 249.

“The signs have been extremely promising with Merchant Navy, whose first crop of yearlings have been very well regarded,” Moore said. “There are 14 going through the ring here this week.

“The signs have been extremely promising with Merchant Navy, whose first crop of yearlings have been very well regarded.” - Tom Moore

“We’re selling a particularly nice colt out of Chasing Mammon as Lot 249. This colt’s a three-quarter-brother to the G1 New Zealand Derby winner Sherwood Forest, and he’s an outstanding colt.

“There are some great Merchant Navy yearlings in other drafts as well. Segenhoe are offering a half-sister to Away Game, and Cressfield have a nice colt out of the stakes winner Jeu de Cartes, and there are plenty of others with very good credentials as well. We’re hoping to see a few fireworks from his progeny this week.”

Proven stallions to the fore

Meanwhile, the older members of Coolmore’s stallion roster are continuing to perform with distinction, with Fastnet Rock, Pierro and So You Think (NZ) all ranked among the top 10 in this season’s Australian sires’ premiership.

Since August 1, Fastnet Rock has been represented by 104 winners from 249 runners among his southern hemisphere crops. That includes 16 individual stakes winners. Personal triumphed in the G1 VRC Oaks in the spring, Rocket Spade followed in the footsteps of Sherwood Forest to deliver the champion sire a second straight G1 New Zealand Derby victory in early March, and star New Zealand mare Avantage lifted her career Group 1 tally to eight with victories in the Railway S., Telegraph, Waikato Sprint and Otaki-Maori WFA Classic.

Pierro’s season features 87 winners from 226 runners, five of them at stakes level including Arcadia Queen in the G1 Mackinnon S. and Caulfield S.

So You Think has sired 113 winners from 262 runners from his southern hemisphere crops this season, with seven individual stakes winners including the G1 George Ryder S. winner Think It Over.

Coolmore’s Easter draft features a quality selection of these respected sires, with six yearlings by Fastnet Rock and six by Pierro.

“We’ve got a great bunch of proven stallions who are doing a wonderful job – Fastnet Rock, Pierro and So You Think,” Moore said. “We’re looking forward to offering some fantastic yearlings by Fastnet Rock and Pierro this week, as well as 11 sons or daughters of the outstanding young stallion American Pharoah.

“He was a champion racehorse, and American Pharoah has already established himself as a world-class sire. He’s had three Group or Grade 1 winners, and he’s had 14 stakes winners across multiple different countries.” - Tom Moore

“He’s had three winners from six runners in Australia so far, including a couple who are emerging as potential Group colts in the very near future (Head of State and Patton), so he’s off to a great start in our part of the world as well.

“All of the trainers who have his stock in their stables have been very positive about the types of horses that they are and what they might be capable of achieving as late 2-year-olds and beyond, which is very exciting for us.

“For this season’s crop of yearlings, he covered very high-quality mares and has produced a particularly nice group of horses. We’re hoping and expecting to see some strong demand for his progeny this week.”