8 min read
Boutique Victorian breeder Robert Crabtree has sent four of his best yearlings into Bhima’s draft for the Inglis Australian Easter Yearling Sale, and he’s staking his reputation on each of them being an eventual black-type horse.

In the winter of 2017, Robert Crabtree’s Dorrington Farm moved from Mornington to Nagambie, to 300 rolling acres along the Goulburn River. It’s a pretty spot, flanked by vineyards to the south along Nook Road and home to Crabtree’s band of about 25 thoroughbred mares.

“We’ve made a lot of changes since we moved in four years ago,” Crabtree said. “Fortunately the property didn’t have horses the last three years before we bought it, so it had a lovely rest. It’s a fine property with great soil, good trees and wonderful water.” 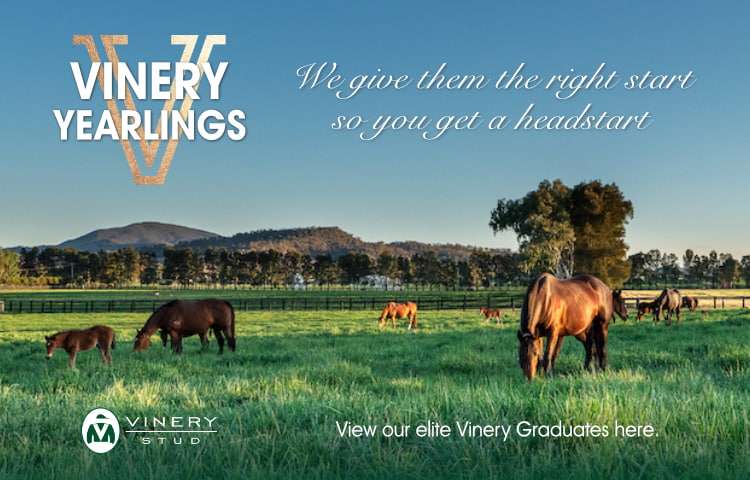 In its early history, Dorrington Farm was Wood Nook Farm, owned and developed extensively by Moonee Valley Racing Club Chairman Bob Scarborough. Further back, it foaled down Rain Lover (Latin Lover {GB}) in 1964. The property is on the industry-supported Black Caviar Trail, which wends through Victoria along the sights and scenes of that horse’s great, undefeated career.

But in an everyday sense, Dorrington Farm is a high-end boutique horse stud.

Crabtree can’t remember the year he first sold a yearling, but it was sometime around 1991. Since then, and from a small collection of mares, his name has been synonymous with Magnus, Gallica (Redoute’s Choice), Light Fantastic (Danehill Dancer {Ire}), Catchy (Fastnet Rock) and in-form Mizzy (Zoustar).

He owned Scandinavia (Snippets), a brilliant producer of horses, among which was Helsinge (Desert Sun {GB}), dam of Black Caviar, and Sun Stud stallion Magnus. Scandinavia was a two-time Group winner, but from her emerged one of the most important modern families in the Australian Stud Book.

However, Crabtree is far from a one-trick pony.

Dorrington Farm is a regular contributor to the top-end of the yearling market, with the studmaster pitching for a place among the top 25 per cent of results at each yearling sale he attends.

Next week, Dorrington Farm will sell four yearlings at the Inglis Australian Easter Sale through Bhima, and Crabtree is confident.

“I’d stake my reputation that all four will get black type,” he said. “I could have kept any one of them with absolute delight. All their x-rays are good, all their scopes are good and all the individuals are good. It’s just all come together, and it doesn’t always work that way, but it has this time.”

The first of Crabtree’s Easter yearlings is Lot 134, a Siyouni (Fr) colt who was conceived in France to Southern Hemisphere time. He is the first foal from Totally Mystic (GB) (Invincible Spirit {Ire}), an unraced three-quarter sister to the brilliant Moonlight Cloud (GB) (Invincible Spirit {Ire}), and a half-sister to Group 2 winner Probably (Ire) (Danehill Dancer {Ire}).

“This is a cracking horse,” Crabtree said. “He’s the only colt of the four, but I’d pick him as the absolute standout. He is so true to type, and I think he will attract really good attention.”

"He (Lot 134) is so true to type, and I think he will attract really good attention.” - Robert Crabtree

“I bought Totally Mystic in-foal to Siyouni at the Deauville Sale in France,” he said. “She was in-foal to Southern Hemisphere time, and I really liked the Invincible Spirit-line in her. There’s a cracking European pedigree in this family, and this colt (Lot 134) will have plenty of people looking at him.”

Dorrington’s second yearling at Easter is Lot 242, an I Am Invincible filly from popular racemare Catchy (Fastnet Rock). The family requires little introduction.

Catchy won the 2017 G1 Blue Diamond S., along with three other Group 2 races, and she was a bright story for Crabtree in her racing days.

The studmaster purchased her from the Coolmore draft for $220,000 at the Inglis Easter Yearling Sale in 2016, and she pocketed closed to $2 million in prizemoney during her career. She’s a bonny mare, and Lot 242 is her first foal.

“This is an exciting one,” Crabtree said, “and fortunately for everyone this filly is a queen. She’s a clone of mum. If you knew Catchy, you’d understand what an incredibly big, strong horse she was, and this foal is exactly mum. She’s a really big, strong, early, lovely horse.”

Lot 242 was foaled on 22 August 2019, a late-winter arrival but an early racehorse. She is dark bay or brown, and cut from the cloth of her dam.

“She’ll be well looked-at,” Crabtree said, “and good luck to anybody that ends up with her. I think she will be a magnificent racehorse.”

A family for sale

On the second day of Easter trading at Riverside, Dorrington Farm will sell Lot 433, a chestnut filly by Written Tycoon from the stakes-winning mare Missy Cummings (Magnus). She is a half-sister to in-form Group 3 winner Mizzy (Zoustar).

“It’s great to have a half to Mizzy by a proven stallion like Written Tycoon,” Crabtree said. “This one’s a half to a wonderful horse that has won close to $1.75 million. Mizzy is in stunning form. She’s run a couple of Group 1 runner’s-up places recently, and we’re hoping now that she’ll freshen up for the G1 Robert Sangster S.”

“It’s great to have a half to Mizzy by a proven stallion like Written Tycoon." - Robert Crabtree

Mizzy was announced in mid-March for the Magic Millions National Broodmare Sale in May, a catchy addition to the catalogue given her recent form. Crabtree regrets that he has to sell her, but he’s little different from most professional breeders with the attitude that you can’t keep them all.

“I bred Mizzy, but own her in a partnership,” he said. “She’ll be sold to dissolve the partnership. I’d like to keep her, but the reality in this business is that you have to sell and turn over some horses that you’d much rather keep. I’d much rather keep these four foals in Sydney, but you’ve got to pay the bills.”

The last from Dorrington Farm’s yearling draft is Lot 446, a Fastnet Rock filly from My Sabeel (NZ) (Savabeel). The mare was a winner of the G3 Toy Show Quality H. in 2014, and it’s a family that features Wailing (Palace Music {USA}), a three-quarter sister to stakes winners Naturalism (NZ) and Crystal Palace (NZ).

My Sabeel’s first surviving foal was National Choice (Snitzel), who is in work with trainer Mick Price and Mick Kent Jnr and has a big future, Crabtree said. The horse was sold at the Inglis Premier Yearling Sale in 2019 for $300,000, and My Sabeel has a full sister to Lot 446 at home on Dorrington Farm.

Crabtree said that each of the yearlings in his draft is an exceptional product.

“The reality is that when the marketplace sees them, it will like all four because they should be there,” he said. “Often, you put a horse into a sale because the sale is there and the horse is there, but this one is a combination of the right horses for the right sale at the right time.”

Crabtree has been selling at Easter for many years, but he won’t be pinned down on it being the best sale of the year for him. Instead, he prefers a tactical approach to selling yearlings.

“It’s about having an appropriate sale for the right horse,” he said. “In an ideal world, you should be aiming in the top 25 per cent of any sale, or you should perhaps question if you are in the right sale. And some years you just don’t have a crop good enough, and in this case, this year, we do.”

"In an ideal world, you should be aiming in the top 25 per cent of any sale, or you should perhaps question if you are in the right sale." - Robert Crabtree

Dorrington Farm didn’t sell on the Gold Coast last January, keeping its stock for Inglis Easter and the Premier Sale in early March. Crabtree had a strong draft in the latter, topping the Sale at $1.1 million with a Written Tycoon colt from Gybe (Fastnet Rock), a half-sister to stakes winner Anabandana (Anabaa {USA}).

He said the yearling market in Australia this year has been sensational, but he’s unsure if Riverside will tumble records next week.

“I don’t think that will happen at Easter,” Crabtree said. “I think Easter will be value for the top level. All of the other sales have taken a fair amount of capital this year, and part of that is because racing administration has done a fantastic job all through the COVID pandemic. Every single day, virtually, there’s been a horse race, and that’s exposed the product, increased wagering and it’s kept the whole ship afloat.”