Behemoth an unlikely hero for Tyreel

6 min read
When Behemoth (All Too Hard) was sold as a weanling, he looked, in Linda Monds' own words, 'an unlikely candidate' to be a Group 1 winner, but there was no-one more pleased to be proved wrong than the Tyreel Stud principal when he stormed away with Saturday's G1 Memsie S. at Caulfield.

The giant, gawky weanling that Tyreel sold for $120,000 back in 2016, was then sold for $6000 12 months later, with Grand Syndicates taking a punt on a yearling that looked a better chance of being a cult figure than a Group 1 winner.

On Saturday, he became both, winning at the elite level for the first time at his 16th start, giving his trainer David Jolly his first Group 1 winner in 18 years, his owners their biggest-ever success, a first Group 1 victory for Laurence and Linda Monds as breeders since they took over Tyreel Stud six years ago, and the third Group 1 graduate in 12 months for yearling vendor Riversdale Farm. 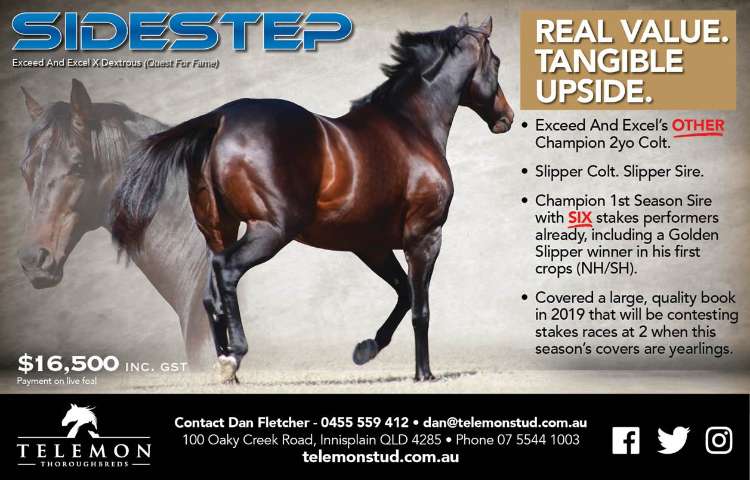 "It’s quite a remarkable feeling to watch this boy, now at 5-years-old, who has been given all the time in the world, which is full credit to David Jolly and the owners who have stuck with him. Sometimes these horses are very easily moved on, but they stuck with him and he has paid them back in spades," Linda told TDN AusNZ.

"It’s incredible, because he was quite an unlikely candidate, to be honest. We all fall into this terrible habit of judging bloodstock and I just think it’s a fantastic story. It just goes to show that the ones that aren't born looking like a catwalk model can go on."

"We all fall into this terrible habit of judging bloodstock and I just think it’s a fantastic story. It just goes to show that the ones that aren't born looking like a catwalk model can go on." - Linda Monds

"These are the stories I love hearing and to think that I am a very small part of this story, I just feel very blessed."

Behemoth's size has always been a substantial part of his reputation, and it was Monds who got the first sense of this when he arrived from the Listed winning mare, Penny Banger (Zedrich), who they had purchased out of the Magic Million Patinack Dispersal Sale for $210,000 in 2013.

"We bought her with a Foxwedge colt at foot and having been served by All Too Hard. When we got her home, she lost the pregnancy, and so we sent her back to All Too Hard," she said.

When the All Too Hard colt arrived, Monds said he was a lot bigger than she expected, but it was much his proportions, or lack of it, which stood out.

"We’ve had plenty of big horses, and Aethero was an example of another big horse. The two physically were polar opposites. Aethero had that strength and that power," she said.

"Behemoth, he was never in proportion, he had a narrow neck, not the prettiest head. He was just a bit gawky. I saw him as a yearling and he still had that gawky appearance, he didn’t look like he'd be athletic.

"I do feel for the guys who bought him as a weanling, because they obviously saw something in him. If I could say anything about him, he always had a nice loose walk."

It was reportedly high-risk x-rays which detracted from his value at the 2017 Magic Millions National Yearling Sale, but Monds said his weanling x-rays were perfectly fine.

"We sell them as weanlings for various reasons, not just because they aren't physically great. We just wondered what yearling sale we could get him into because he was enormous," she said. "We moved him on and hoped someone else could have success with him."

With x-rays not figuring in their decision making, Grand Syndicates picked up a horse it knew would take time, but who could develop the ability to match his ample frame.

Behemoth's success, according to Monds, is a tribute to the patience of Jolly and the connections, and the things which are hardest to measure in a young horse, intelligence and fortitude.

"Given time and the right management, he's grown into more than an athlete now. He's a champion now, with a massive heart and the right brain," he said.

"Given time and the right management, he's grown into more than an athlete now." - Linda Monds

"You can have a horse that has the physical attributes of looking like they will make a champion, but their brain never gets them there."

Penny Banger's stay at Tyreel lasted only a few seasons before she was sold for $30,000 in foal to Scissor Kick in 2017.

"We never really got a great type out of Penny Banger, which is why we sold her. She was a great runner herself," Monds said.

"The Foxwedge colt she had ended up being a swayback and we sold him at Scone. He wasn't the best type in that regard. He had a great hindquarter and he moved well, but he was a swayback. That's the only swayback we have ever had here."

Named Matchfox, he is a 35-start maiden and was placed at Cloncurry last week.

"She missed the next year after having Behemoth and the year after that she went in foal to Scissor Kick and that's when we sold her. I was a little gun shy with the types she was leaving us," Monds said.

Sadly, Penny Banger died not long after she was sold, with her final foal, the filly Danny's Sparkle, showing some of her elder half-brother's ability when second on debut at Echuca for trainer Mitch Freedman at Echuca last month.

Graduate success flows on the track and in the ring

It's been a big 18 months for Tyreel on the racetrack with the multiple stakes-winning performances of Behemoth, as well as Group 2-winning half-brothers Classique Legend (Not a Single Doubt) and Aethero (Sebring).

In the sales ring, the $1.7 million result for an Exceed And Excel colt at the Inglis Australian Easter Sale in 2019 was followed by a $1 million price tag for the So You Think (NZ) half-brother to Classique Legend and Aethero at this year's Easter Sale.

The Exceed And Exceed colt, Osamu, was one of two Tyreel-bred representatives in Saturday's G3 San Domenico S. at Rosehill, while another graduate, Academy (Shamus Award), was victorious earlier in the day.

"We had a huge day yesterday. They didn’t all win but the fact that we have these horses running around from our farm, when we only foal down 25-30 a year, to have all of them in one day, is great," Monds said.

"Watching our brand going across the finish line, whatever the results, the fact is that they are out there and giving their owners such a thrill and they are still flying our flag. We are pretty proud of all of that."