Group-winning trainer back in usual routine

5 min read
It’s been quickly back to business as usual along with chores at home for Michael Costa, with his newly-earned status as a Group-winning trainer proving no golden pass to any special privileges.

Gold Coast-based horseman Michael Costa played various roles in the thoroughbred industry before the call of training was too hard to ignore and his career has gained further impetus through the deeds of Supergiant (NZ) (Red Giant {USA}).

The 3-year-old was a gallant last-start winner of the G3 Gunsynd Classic at Eagle Farm and provided Costa with his most significant result since he moved to Queensland in late 2016. 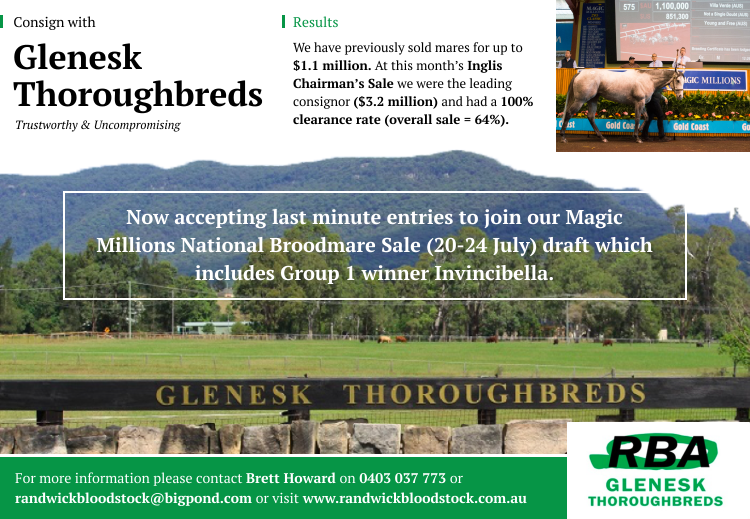 “I’ve been walking around the house and telling my wife when she’s asked me to do things that I’m a Group-winning trainer, but it’s not flying with her,” he said. “I’m still doing the chores and watching the kids.”

Costa said his stable star Supergiant, who he purchased for clients last year off a trial video in New Zealand, had come through his weekend heroics in fine shape and had much more to offer as he matured further.

“There’s plenty of upside with him. He’s still got a lot of strengthening to do and he’s still figuring it all out. It’s looking like the further he goes the more he’s going to improve.”

“There’s plenty of upside with him. He’s still got a lot of strengthening to do and he’s still figuring it all out.” – Michael Costa

The next target for Supergiant, who has been the subject of overseas interest since his latest performance, is the G3 Rough Habit Plate.

“The phone has been ringing from Hong Kong so we’ve been going back to the owners with the option. There are no firm offers yet, but I think the large ownership group is pretty excited about him and it’s more than likely we’ll bat on toward the Rough Habit,” Costa said.

For good measure, the stable was also successful at Ipswich on Sunday with the lightly-tried Reus (Star Witness), who broke his maiden at his fourth start off the back of three consecutive placings.

Costa established his training operation at the Gold Coast in November, 2016, after initially plying his trade in the competitive Sydney arena.

He first became serious about the industry as a teenager, but doesn’t have any family ties to racing.

“Nothing at all – I grew up in Western Sydney out at Hawkesbury and when I was 14 or 15 I used to help out at the stables and learned how to rug and do the absolute basics. I then started riding trackwork and from there went into Randwick,” Costa said.

“I rode trackwork for some of the bigger stables in Sydney and was also a steward for four years and then foreman for Kevin Moses,” he said.

“I rode trackwork for some of the bigger stables in Sydney and was also a steward for four years and then foreman for Kevin Moses.” – Michael Costa

Costa served as the Deputy Chairman of the Northern Rivers Racing Association before returning to Sydney to join the Metropolitan panel as a Senior Steward. He subsequently worked alongside Moses and later took out a metropolitan trainer’s licence in 2010.

“Starting off, I bought a tried horse for $4000 and I was probably a bit too enthusiastic at the time and it was a definite slog to get going, it was tough,” Costa said.

“This game’s not like boxing, when the best boxer in the ring wins, there’s a lot of variables and you need networks and owners. If you don’t have that it’s hard to show your true training ability.”

Costa made the decision to relocate to Queensland and has never had cause to regret the move.

“It was mainly a business decision and based around the fact that the majority of my stable in Sydney were country horses,” he said.

“We were having to travel a lot and were still up against some very decent competition. You go to the country races twice in a month and it was an extra $1000 for floating on the owner’s bill at the end of the month.

“I was a long way down the list so we decided to make the move. Gold Coast is very central to a lot of tracks and it’s been good and we’re banking on getting some better horses through the stable.”

In between his roles in the racing game, Costa also undertook formal studies.

“I studied equine science and the eastern medicines and acupuncture. I do a lot of our own acupuncture, lasering and massaging in the stable,” he said. “Most of my days are spent at the barn pottering around doing the remedial stuff.”

'“I studied equine science and the eastern medicines and acupuncture. I do a lot of our own acupuncture, lasering and massaging in the stable." - Michael Costa

Costa places a major hands-on emphasis to tailoring training programs to the requirements of the individual’s and his approach also implements the use of technology.

“We just use everything available. We have heart rate monitors for every gallop and you have to use as many tools as possible and basically it all comes down to combining everything and doing the basics extremely well,” he said.

“We use the best people available, best farrier we can get and the best track riders and so forth.”