4 min read
Jason Collett lives and breathes racing and any days off the newly-crowned Group 1 jockey has are spent helping out his partner Claire Cunningham, who operates a successful boutique stable at Warwick Farm.

The expatriate New Zealander is well-established in the top tier of Sydney jockeys and at Eagle Farm on Saturday a monkey leapt off his back when he guided Invincibella (I Am Invincible) to a first top-flight success in the Tattersall’s Tiara. 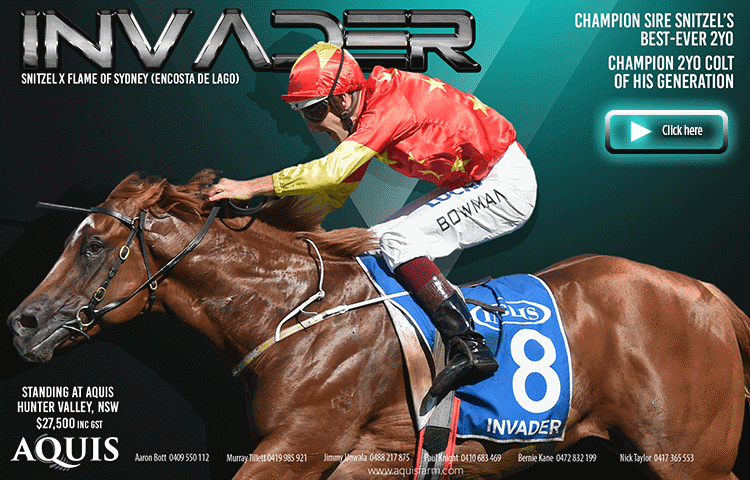 Collett, who has just turned 28, didn’t take time out to celebrate with a lengthy drive home ahead of him and come Monday he was back to his usual routine around the stable.

“There were supposed to be trials on, but they got called off because it was too wet,” he said. “I don’t have many hobbies outside of racing.

“Obviously, my partner Clare trains and I have a bit of a part in that. It can be stressful at times, but I still really enjoy it.”

It was nearly a double celebration for the couple at Eagle Farm where the Cunningham-trained 2-year-old Big Parade (Deep Field) finished runner-up under Collett in the Listed Winning Edge Presentations S.

Cunningham gained experience with Peter Moody at Caulfield and spent her last four years with him as assistant trainer at Moody’s Sydney base following stints with Joe Pride, Gai Waterhouse and Bjorn Baker.

“We’ve been together for four or five years so we’re pretty happy,” Collett said.

He produced a flawless ride aboard Invincibella, having the mare in a handy place throughout before launching his bid at the top of the straight.

“We managed to get in a good spot early on and coming to the home corner I was starting to get a little confident,” Collett said.

“There hadn’t been a great deal of speed on and she was travelling easily at that stage. I asked her to slide forward and she got to the front pretty quickly, but then Pohutukawa went past us and I was thinking not again.

“To her credit, my mare didn’t give in and is very strong in a finish. That told over the last 100 metres as she got her nose back in front when it mattered.”

“To her credit, my mare didn’t give in and is very strong in a finish.” – Jason Collett.

Collett hails from a well-known and respected racing family in New Zealand where his father Richard, a former jockey, trains at Pukekohe Park and his mother Judy is also a former rider.

Collett’s sisters Alysha and the now-retired Tasha, who is married to jockey Andrew Calder, are both Group 1 winners and he’s naturally delighted to have joined the club.

“I’m slowly taking it in more and more,” he said. “It’s a pretty good feeling to get it out of the way, it’s taken a while but I’ve got it done and dusted so it’s onward and upward.”

While it was cause for the family to celebrate, Richard was the last to know.

“I spoke to Mum on Saturday night as I usually do and she was pretty happy. Dad is on a fishing trip with Gareth McRae and a couple of other friends in Alaska.

“He was en route there when the race was run and he landed about an hour later. There was a flood of text messages come through on his phone from friends and owners.

“Dad is on a fishing trip with Gareth McRae and a couple of other friends in Alaska.” – Jason Collett.

“He obviously put two and two together that I must have got one.”

It was also appropriate that it was aboard a Chris Waller-trained runner that Collett got his first Group 1 as the Sydney horseman played a pivotal role in his move to Sydney.

“I’ve been here about six and a-half years. Chris had a scholarship with the Northern Apprentices’ School at home and I got to go over to Chris’ stable for two weeks,” he said.

“I did that and came back 12 months later when they changed the rule of what New Zealand wins counted toward Australia and I was still able to have a claim.

“I did another three months then and came back again and then went back a year later and stayed. At that stage I was a fully-fledged jockey.”

It’s a permanent move that Collett has had no cause to regret.