7 min read
Hot on the heels of a stakes win with imported mare Con Te Partiro at Scone, Newgate has announced Menari will be joining the stallion roster again after re-injuring his suspensory.

Menari, the Group 2 winning son of Snitzel, has had his racetrack comeback ended by a recurrence of a suspensory injury, and will return to Newgate for stud duties this season.

“I’m devastated that Menari has gone amiss, as I honestly feel he could have won The Everest. He is one of the most talented horses I have ever had anything to do with. I’ve said it before and I’ll say it again…he is just something different this horse,” trainer Gerald Ryan said.

Menari stood his first season at Newgate last year but fertility issues saw him set for a return to the track before this latest setback.

“Menari obviously has machine-like talent, is by a Champion sire and hails from the famous Corumbene Stud pedigree,” Newgate's Henry Field said.

“Menari obviously has machine-like talent, is by a Champion sire and hails from the famous Corumbene Stud pedigree.” - Henry Field

“We will be doing everything under the sun to manage Menari’s fertility in 2019 and at a fee of $15,000 + GST he represents phenomenal value.”

Menari will be limited to very few outside bookings. 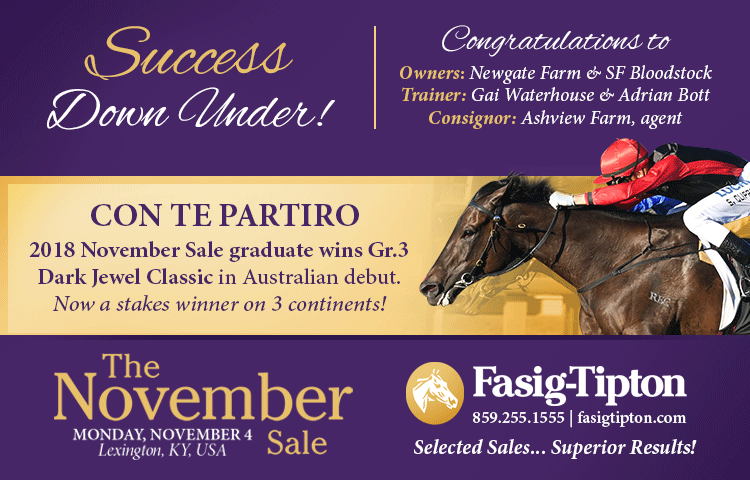 A day earlier, Newgate enjoyed a first win in their new black and red silks with imported Scat Daddy (USA) mare Con Te Partiro (USA) in Saturday's G3 Arrowfield Dark Jewel Classic at Scone. The win was significant on a number of fronts, with Field attributing the success to the hard work of co-trainer Adrian Bott.

Con Te Partiro was one of two daughters of Scat Daddy which Newgate bought out of last year's Fasig-Tipton November Sale, paying US$575,000 for the Saratoga and Royal Ascot stakes winner.

"She was a beautiful mare and she had high class Royal Ascot and 2-year old form and being by Scat Daddy, being beautiful and having that form, we really thought she was appealing for us to buy as a broodmare for Australia," Field told TDN AusNZ.

"Myself, Gavin Murphy and Tom Ryan of SF Bloodstock work very really hard at these November sales at Kentucky to source these high-quality mares for Australia."

"We bought her specifically to breed to Russian Revolution this season and after purchasing her I said to Gai (Waterhouse) and Adrian, have a shot with her and see how we go. If she doesn’t go well, you can send her back to the farm," he said.

"We bought her specifically to breed to Russian Revolution this season." - Henry Field

Bott took Con Te Partiro, who won the Listed Sandringham S. at Royal Ascot when trained by Wesley Ward, on as a project, and with the mare being notoriously quirky, it wasn't an easy task.

"She is quirksome," Waterhouse said after Saturday's narrow win. "Before the race I said she'll either blow her brain in the mounting enclosure or she'll win the race."

"But she stood quietly. Full credit to the girls and boys who looked after her and kept her quiet."

Field said Bott's work had been instrumental in getting the 5-year-old back to her best at her first Australian run, having had two trials in the lead-in.

"To be fair, particularly to Adrian Bott, he worked incredibly hard on the mare and nailed her. To have her as a stakes winner on three continents is an achievement probably never done before by any mare," he said.

"When she first arrived and went to Gai and Adrian's, Gai called me and said she'll be a bit of work, she was a very hard puller. They have put a lot of effort in her to get her to relax. She's a seriously valuable mare now, having put in a Group victory in a high-class mares race yesterday at Scone."

Fighting qualities to the fore

It was an impressive win in that she was forced to fight very hard. She settled just off the pace but when Savatiano (Streey Cry {Ire}) kicked clear and Con Te Partiro was tightened for room at the 300m between another Godolphin mare Organza (Street Cry {Ire}) and Into The Abyss (Foxwedge), she looked to be without luck.

But Sam Clipperton, who had also won the featured Listed Scone Cup on the first day of the two-day carnival, lifted her over the final 200m and she surged late to nab Savatiano and secure a first win in the new black and red Newgate colours.

"That's the first winner for the new set of colours that we registered. We have never had colours before and we figured we might as well get a set made up. We are certainly happy that they seem to be lucky," Field said.

"That's the first winner for the new set of colours that we registered. We have never had colours before and we figured we might as well get a set made up." - Henry Field

It was also historic in that she became the first Australian winner by the legendary Scat Daddy, who has only had a handful of runners here.

The progeny of Scat Daddy has been particularly sought after by Australian breeders in recent years and Coolmore now standing four of his sons, Justify (USA), Caravaggio (USA), No Nay Never (USA) and Mendelssohn (USA), while Swettenham Stud is standing Sioux Nation (USA).

Newgate has been building up its Scat Daddy broodmares, with Con Te Partiro and Paulita (USA) both secured at the November Sale.

"We've got four Scat Daddy mares on the farm. We have been collecting them for the past few years. I think she's the jewel in the crown," he said.

"We've got four Scat Daddy mares on the farm. We have been collecting them for the past few years. I think she's the jewel in the crown," - Henry Field

"There's a filly called Paulita, she's with Ciaron Maher, another Scat Daddy filly and she should have her first start in the next few weeks."

Paulita is also a stakes winner in the USA and cost US$325,000 at the same sale.

Insta Erma (USA) (Pioneer of The Nile (USA), who has had a couple of starts in the Newgate colours for Chris Waller in Melbourne, was bought for US$425,000 at the Keeneland November Sale.

"We bought three fillies to put in training, two are by Scat Daddy," Field said. "The reality is, we didn't have any ambition with them. We thought that rather than eating grass on the farm, we'd give them every opportunity to show what they can do on the track.

Con Te Partiro, who is out of the stakes-placed mare Temple Street (Street Cry {Ire}) and is a half-sister to stakes-winner in Donworth (USA) (Tiznow {USA}) holds a nomination for both the G1 Kingsford Smith Cup and the G1 Stradbroke Hcp in the coming weeks but Field said he would be entirely guided by the opinion of her trainers.

"While she is going well, we will keep her going. Adrian Bott has put a huge amount of work into this mare and he is really focused hard to get the best out of her, and if he's not happy with her anymore, we’ll send her home, but until then, himself and Gai can keep her going," he said.

Next article
Smart stakes streak a boost for Twin Hills