8 min read
Fernrigg Farm went all out for a well-related daughter of High Chaparral (Ire) and got their prize with a final bid of $220,000, a price that was later matched on the opening day of the Inglis Australian Broodmare Sale by Yulong’s pursuit of a Bernardini (USA) mare from a strong Group family.

>> Fernrigg comes up roses with $220,000 bid for High Chaparral (Ire) mare in foal to super sprinter Merchant Navy to join its growing band of broodmares at Musswellbrook.

>> Sean Duke adds to his broodmare band with $205,000 purchase Rioghan (Snitzel) and a possible date with Written Tycoon. 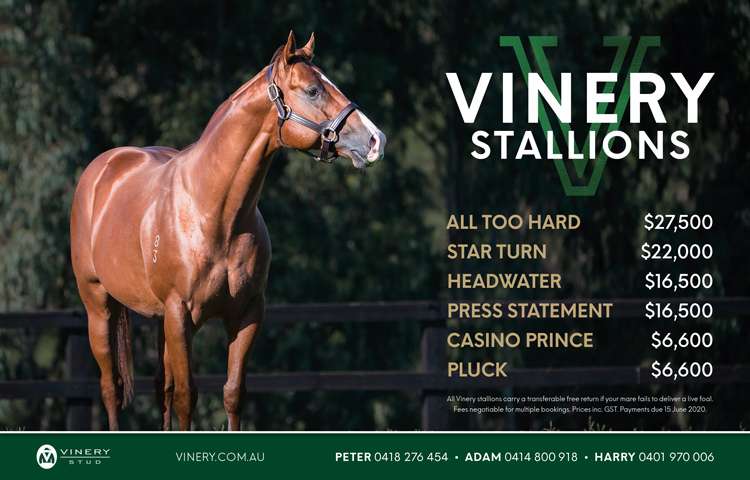 Fernrigg in love with Deb

Fernrigg Farm’s Rae-Louise Farmer wasn’t to be denied Lot 388 and she went all out to secure Roses For Deb (High Chaparral {Ire}) out of the draft of Segenhoe Stud.

In foal to the internationally-performed sprinter Merchant Navy, she is a daughter of the dual Group 2 winner and Group 1 performer Chinchilla Rose (Lion Hunter).

“She’s a beautifully balanced mare and really attractive with a great head and shoulder,” Farmer said.

“I thought I was going to be paying close to $200,000, but a couple of the good judges were on her, so you have got to pay for the ones you want.

“She’s a beautifully balanced mare and really attractive with a great head and shoulder.” - Rae-Louise Farmer.

“The top end is strong, which seems to be the pattern throughout the year, at the yearling and weanling sales.

“She is such a beautifully balanced mare who is really attractive with a great hip and shoulder and in foal to a stallion who went across to Royal Ascot and was pretty impressive.

“Coming from Widden, the Leonie Chiara is a family that caught my eye from there. We are trying to keep growing our broodmare band with mares who have that sort of profile. It is also an active family as well, there is a lot going on.

“She will stay at Fernrigg for a while I think. We are trying to put together nice young foundation mares for the farm.

“There’s no stallion in mind. It’s a bit of a later cover so we’ll see what she throws. " - Rae-Louise Farmer.

A future mating for Roses For Deb has yet to be confirmed.

“There’s no stallion in mind. It’s a bit of a later cover so we’ll see what she throws,” Farmer said.

Segenhoe Stud General Manager Peter O'Brien said Roses For Deb was an outstanding type and in foal to the right stallion.

“She’s a lovely High Chaparral mare from a family that just keeps giving. Her half-brother Rendition was stakes placed in New Zealand a couple of weeks ago and every year a good horse seems to come out of the page.

“She’s a beautiful mover, had all the attributes of High Chaparral and I think Merchant Navy is a perfect mating for her.

“She’s a beautiful mover, had all the attributes of High Chaparral and I think Merchant Navy is a perfect mating for her. " - Peter O'Brien.

"We could have gone to the Chairman’s Sale, but we placed her here deliberately to try and sound her out a bit and it seems to have paid off.

“The market has been good, really good. It’s an evolving market. You walk in and you look at the sales ground and auditorium and think gosh there’s not many people here, but it’s deceptive because it’s so big.

“I wish I’d had more mares there, we had a bumper time. We had four mares in and three of them made way overs on what we thought.

"We had four mares in and three of them made way overs on what we thought." - Peter O'Brien.

“I’ve never seen an active market like it. Normally at a mares’ sale you might have one or two bidders on a mare, but there was seven or eight bidders every time. I’ve never seen anything like it.”

“This year, we are buying some good quality mares to enhance our broodmare band,” Yuesheng Zhang said.

“We’ll send between 60 to 70 of our best mares to support Grunt. This Bernardini mare, in terms of physique and pedigree, matches our standards and requirements plus in No Nay Never we believe he will prove to be a world-class stallion of the future.

“Although we have paid more than our expectations, the market is very strong for these good mares and we are happy to have this mare join our broodmare band.”

“She's a beautiful young mare from a good current family, in foal to one of the most exciting young sires in the world,’’ Coolmore’s Tom Magnier said.

“The first Southern Hemisphere-bred No Nay Never yearlings sold for up to $400,000 this year and he has over 10 per cent stakes winners to runners, despite his oldest only just turning three.

“She will be a great addition to Yulong's exceptional broodmare band and we wish them the very best of luck with her."

Victorian Sean Duke added Lot 381 to his growing band of broodmares, paying $205,000 for the unraced Rioghan (Snitzel). She was offered by Yarraman Park Stud in foal to I Am Invincible.

“I bought one at the Chairman’s Sale and two here and I bought four here last year,” Duke said. “I’ve got five or six at home on the farm just outside Ballarat.”

“I’m also in a pretty good horse at the moment, Ringerdingding, and I was in Jakkalberry." - Sean Duke.

He is keen on Written Tycoon as a future consort for Rioghan, who is from the family of Group 3 winners Tuscan Sling (Danehill Dancer {Ire}), Kiwi (Reset), Lite’n In My Veins (Henrythenavigator {USA}) and Hit World (High Chaparral {Ire}).

“I’m also in a pretty good horse at the moment, Ringerdingding, and I was in Jakkalberry,” Duke said. “He ran third in the Melbourne Cup, won the American St Leger and I went over and saw him run third in Dubai.”

Jessamin (Stratum) provided an early highlight when the Corumbene Stud-offered mare, Lot 272, was knocked down to Harry McAlpine Bloodstock for $155,000.

In foal to exciting young stallion Rubick, Jessamin turned the head of the Queensland-based Harry McAlpine and he secured the mother to be, who was a 2-year-old winner and is a half-sister to the multiple winner Smart Venture (Smart Missile).

“We haven’t decided which stallion she will go to yet,” he said. “Certainly, Encryption is a possibility, we’re hunting to get him some nice mares to kick off his stud career. She’ll either go to him or Spirit Of Boom.”

The G2 Danehill S. winner Encryption (Lonhro) will stand his first season at the McAlpine family’s Eureka Stud later this year alongside Spirit Of Boom.

“Certainly, Encryption is a possibility, we’re hunting to get him some nice mares to kick off his stud career." - Harry McAlpine.

Jessamin is from the family of the G1 Randwick Guineas winner Inference (So You Think {NZ}), also runner-up in the G1 Rosehill Guineas and third in the G1 VRC Derby.

“She suits everything we look for in a mare,” McAlpine said. “She’s got outstanding quality, she was a 2-year-old winner and she’s got a cover to a promising young sire in Rubick. It’s a great family and they throw good sorts.”

“Competition was spirited for the better lots. It was very encouraging to see a strong clearance rate and a diversified buying bench,” he said.

"It was very encouraging to see a strong clearance rate and a diversified buying bench.” - Sebastian Hutch.

“Stallion masters see it as a great opportunity to pick up mares for their stallions. There are people with money to spend and fortunately they came here.

“Young mares with good covers, the appetite for them is just insatiable. As long as people are presenting the right product to the market they are selling very well.”