6 min read
A $600,000 I Am Invincible filly from dual-Group 1 winning mare Srikandi (Dubawi {Ire}) offered by Kitchwin Hills stole the spotlight in a day of solid trade at the Inglis Weanling Sale, becoming the most expensive Inglis weanling to sell in 10 years.

>> Filly by I Am Invincible out of top mare Srikandi fetches a sale-topping $600,000 when purchased by Andrew Williams Bloodstock.

>> American Pharoah makes a big impression as his first southern hemisphere weanling fetches $220,000, while the first weanling by Extreme Choice is knocked down for $140,000.

>> Lyndhurst Farm purchased five weanlings for an average price of $112,000.

It could be a huge week for Group 1-winning mare Srikandi (Dubawi {Ire}), who played a starring role in the 2019 Inglis Australian Weanling Sale in Sydney on Thursday.

The G1 Stradbroke H. and Tattersall’s Tiara winner will herself be offered during Friday’s Chairman’s Sale, and she topped Thursday’s weanling session with a $600,000 filly by I Am Invincible. It was the highest price paid for an Inglis weanling in the last decade, and it was more than double the second-highest price of this session. 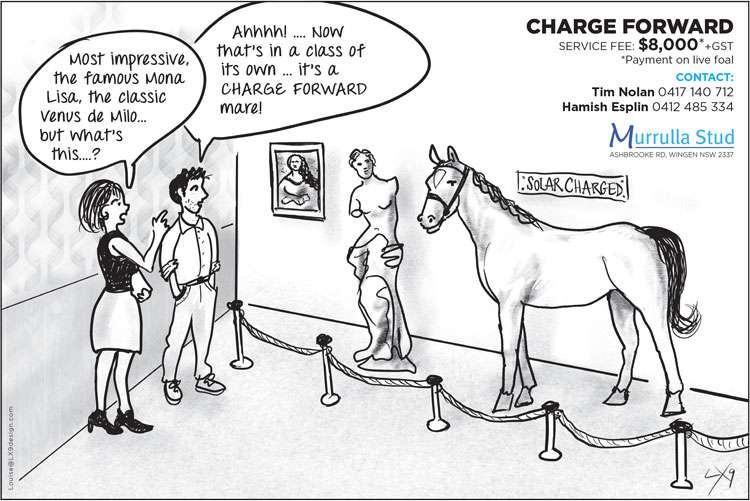 The filly is Srikandi’s second foal and was bought by Andrew Williams, who paid $400,000 at the Magic Millions Gold Coast Yearling Sale earlier this year for the mare’s first foal – a filly by Snitzel.

“We bought her Snitzel filly at the Magic Millions sale, and she’s gone through the breaking-in process unbelievably well,” he said.

“We bought her Snitzel filly at the Magic Millions sale, and she’s gone through the breaking-in process unbelievably well." - Agent Andrew Williams

“The two fillies were very similar in shape, and this filly herself is quite similar in shape to the dam. She’s probably a statement to the dam herself. By Dubawi, a multiple Group 1 winner – you can’t buy those things. It’s high-end stuff.”

Williams has kept tabs on the I Am Invincible filly and has never failed to be impressed, so the price tag came as little surprise.

“I've seen this filly a number of times at the farm, from foaling down through to Magic Millions inspections and then on this sale, and she's continued to develop,” he said.

“This filly was a September foal and has great shape and moves very well. She’s got that good head, which I Am Invincible can throw. It’s hard to buy these fillies – they’re like collectors’ items, and the residual value will always be there.”

“It's very hard to buy these horses in this marketplace, so, all in all, I was really rapt with how she presented at the sale here. In these no-reserve sales, you've just got to watch them go through and see what they make.

Srikandi, goes through the ring as Lot 28 in the Chairman’s Sale and is currently in foal to American Pharoah, who was the sire of the second-highest-priced lot in the weanling session.

With the 2019 Kentucky Derby just days away, it was fitting that Triple Crown winner American Pharoah (USA) (Pioneerof The Nile {USA}) was one of the headline acts of the Inglis Weanling Sale as his first southern hemisphere weanlings went through the ring at Riverside Stables.

The first of those was Coolmore’s colt out of stakes-placed Fastnet Rock mare Triband, which sold for $220,000 – a price that was beaten only by the $600,000 Srikandi filly. The colt was knocked down to Aquis Farm.

“It was around four times his service fee, which for a weanling is a very good return,” Coolmore's bloodstock agent James Bester said.

"In time he might end up a very, very cheap racehorse." - James Bester

“I believe the buyer has bought it as an end user, and in time he might end up a very, very cheap racehorse, because I think that by the time the yearlings sell, the way Pharoah's going at the moment, that might look a very cheap buy.”

Bester believes that, as far as the types American Pharoah is leaving is concerned, the best could be yet to come.

“One expects better types back on the farm and at the yearling sales than at the weanling sales,” he said. “His progeny are awesome types, actually. I myself have four or five of them, in partnership with people.

“Out of mares whose previous foals may have disappointed, out comes the Pharoah – an absolute cracker. He consistently passes on size, scope and action. He's quite remarkable for action. He gets awesome-moving animals, as he himself was."

Other first season sires to make a positive impression included Extreme Choice (Not A Single Doubt), who had one weanling sell for $140,000. The filly was secured by Jadeskye Racing and offered by Segenhoe Thoroughbreds.

A colt by Golden Slipper-winning Capitalist (Written Tycoon) also made six figures, with the Aquis-sold filly knocked down to Newgate Farm for $100,000.

The top vendors by average (three or more sold) were Rothwell Park, whose three lots fetched an average of $106,667.

The leading buyer was Andrew Williams, whose single strike was the sale-topping $600,000 I Am Invincible filly.

Kiwi couple Mark and Shelley Treweek were active buyers at the weanling sale, securing five by five different sires for an average of $112,400 under their Lyndhurst Park banner. The top price was $160,000 for a Pierro colt offered by Rothwell Park.

Statistics up across the board

By almost all measures, this year’s sale was a big step up on last year.

Next article
Change of focus for renowned pinhookers