4 min read
Four weeks after missing out by a whisker in the G1 Galaxy at Rosehill, multiple big-race place getter Pierata finally had his day in the sun at Randwick on Saturday.

Previously an elite-level place getter in the Galaxy, the Randwick Guineas and the VRC Sprint Classic, four-year-old entire Pierata (Pierro) claimed his first Group 1 win in the Schweppes All Aged S.

Ridden as usual by Tommy Berry, Pierata was pushed forward from his wide gate before settling in fifth spot as Manuel (Commands) set the pace. Berry presented Pierata on the outside at the top of the straight, and he went into overdrive and charged to the lead just past the 200-metre mark.

Osborne Bulls (Street Cry {Ire}) dived through on his inside in a determined bid to continue owner Godolphin’s Group 1 gold rush in Australia this season, while Siege of Quebec (Fastnet Rock) and Champagne Cuddles (Not a Single Doubt) came home with big strides out wide. But this time there would be no denying Pierata, who crossed the finish line a long neck ahead of Osborne Bulls. The 1400 metres were run in 1:20.64.

“He travelled so sweetly for me in the run,” Berry said. “At the top of the rise, on the better going, he was able to let down with that signature turn of foot he has got.

“At the top of the rise, on the better going, he was able to let down with that signature turn of foot he has got." - Tommy Berry

“I thought Hughie (Bowman, on Osborne Bulls) was going to get me at the 100 metres, but my bloke actually pulled away from him late. He deserved to win, he is a quality colt and I’m sure there will be a lot of studs knocking on the door now.” 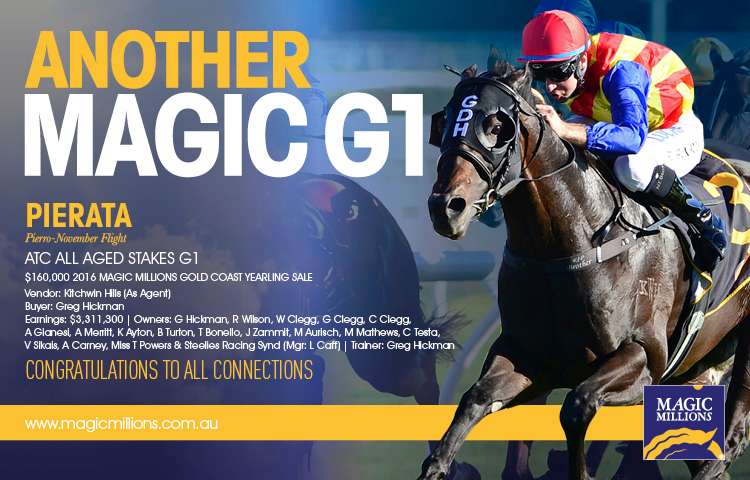 “A horse like this is life-changing. I’ve got a little share in him, which will help along the way.”

“A horse like this is life-changing. I’ve got a little share in him, which will help along the way.” - Greg Hickman

Hickman bought Pierata for $160,000 at the 2016 Magic Millions Gold Coast Yearling Sale. Raced in partnership with more than a dozen others, he has now had 19 starts for seven wins, seven placings and in excess of $3.3 million in prize-money.

“They’re a passionate group of owners,” Berry said. “They’ve stuck by Greg, which is incredible.

They’ve decided to keep Pierata, when they could have sold him off a long time ago. Full credit to these guys.

“Greg is like family to us. I grew up with him and used to call him cowboy when we were growing up. This is very special. I’ve always remembered where I come from, and I love riding for the trainers out there (Warwick Farm). You know how hard these guys work, but they don’t get the credit they deserve.”

Bred by Hobartville Stud, Pierata is a half-brother to three winners including Ashokan (More Than Ready {USA}), who won the G3 Skyline S.

Their dam, the G3 Millie Fox S. winner November Flight (Flying Spur) has since produced a Dundeel filly (named November Morning) and a Rubick (Encosta de Lago) colt who is now a yearling. She returned to Pierro last spring.

All Aged runner-up Osborne Bulls, who was the $2.80 favourite, is beginning to make his own name as a perennial big-race placegetter. He had finished second in the G1 Lightning S., Newmarket H. and T. J. Smith S. in his previous three appearances.

“He’s a model of consistency, and he hasn’t let anyone down again,” jockey Hugh Bowman said.