The Autumn Sun pulls out all the stops

4 min read
As he stepped up to 2000m The Autumn Sun showed his true class in a hard-fought Rosehill Guineas.

On a sparkling early autumn afternoon in Sydney, they backed The Autumn Sun (Redoute's Choice) as if the G1 Rosehill Guineas was a fait accompli, notwithstanding the fact that it was 2000 metres for the first time backing up on two weeks’ rest off a tough victory in the G1 Randwick Guineas (1600m) and over a strip heavily affected by recent rains.

But few horses in training love a dogfight as much as The Autumn Sun and he pulled out all the stops late to deny a very game Arrogant (NZ) (Ocean Park {NZ}) by a narrow margin.

Drawn low in gate three, The Autumn Sun was away without incident and landed midfield and a bit off the inside as the outposted G1 New Zealand Derby winner Crown Prosecutor (Medaglia d’Oro {USA}) raced out and away from the rest of his rivals through the early exchanges before easing down towards the inside by James McDonald to lead passing the 1600-metres point. 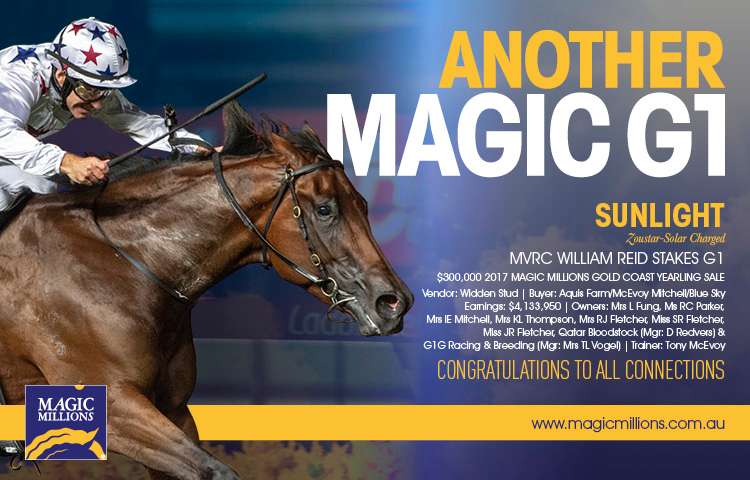 Crown Prosecutor led them along through the middle stages at what appeared to be a demanding-enough tempo given the underfoot conditions and Arrogant was content to sit second, but the complexion of the race began to change when Kerrin McEvoy asked The Autumn Sun to improve his position with four furlongs to travel.

While under a busy ride, the favourite continued to gain on the leaders, sustaining a three-wide rally to join Arrogant and a weakening Crown Prosecutor at the entrance to the straight. The Autumn Sun finally poked his head in front with 300m to race and he needed to call on his considerable class and resolve from there to post a narrow and hard-fought victory.

“I got strict instructions, no heart attacks today,” McEvoy reported. “It wasn’t a heart attack at the 600m but it was a bit at the 100m. He’s a real gritty colt and his record suggests that. He toughed it out at 2000m, his first try at the trip, and he toughed it out really well.

He continued, “he hit the front early enough really and we were just in a case at the furlong where I had a slight advantage and he showed an enormous amount of grit because he wasn’t really liking that ground, it’s a real heavy track, and he has proved to me today that he prefers a nicer surface."

Having earned his first top-level success in similarly deep ground in last year’s G1 J J Atkins S. at Doomben, The Autumn Sun was only third when first-up in this track’s G2 Stan Fox S. in September, but atoned for that defeat with victories in the G1 Golden Rose S. and the G1 Caulfield Guineas before spelling again.

He resumed victoriously in the G2 Hobartville S. over this course Feb. 23 and his rabbit-out-of-the-hat success in the Randwick Guineas served as the springboard to this first go over the metric mile and a quarter. He could remain at the 2000m for his next appearance against none other than his stable companion Winx in the G1 Queen Elizabeth S. in three weeks.

The Autumn Sun, a $700,000 Inglis Easter grad, is one of 34 Group 1 winners for the incomparable Redoute’s Choice and is slated to join his sire at Arrowfield at the conclusion of his racing career. His dam is an unraced half-sister to European champion Azamour (Ire) (Night Shift) and GSW & G1SP Arazan (Ire) (Anabaa).

Azmiyna is also represented by a 2-year-old filly by Snitzel, that was purchased by Chris Waller and Guy Mulcaster for $1.3 million at the Easter in 2018. She is the dam of a yearling colt by Not a Single Doubt heading to the Inglis Easter Yearling Sale next month and a weanling colt by Snitzel. Azmiyna was not served during the last breeding season.