Another Winx win never in doubt

3 min read
In recording a 32nd consecutive victory, a 24th at Group 1 level and fourth George Ryder S. in succession, the worldwide sensation that is Winx somehow managed to record a career first.

Winx (Street Cry {Ire}) had started as odds-on in each of her 26 starts since lighting up the tote to the tune of $4.60 when winning the first of her four G1 Cox Plates in 2015, but never had she jumped at a price as low as five cents on the dollar.

And those who swallowed and took the skinny odds never had a moment’s worry on Saturday afternoon in what was to be her final appearance at her home track. 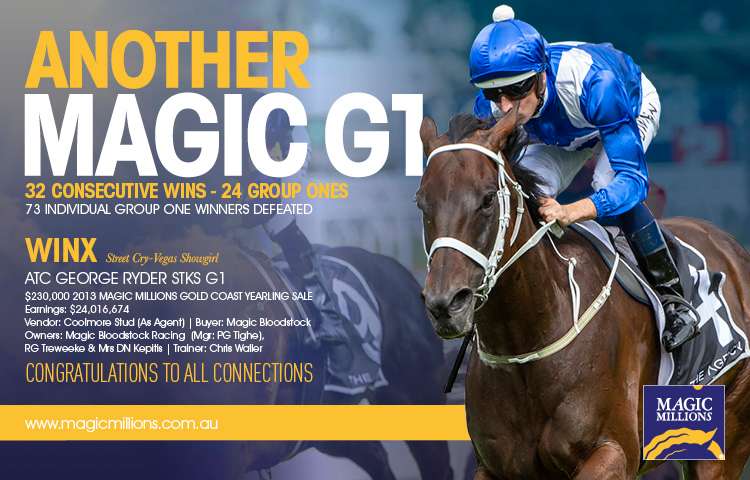 Last-out G3 Liverpool S. winner Dreamforce (Fastnet Rock) showed the most early speed and set the pace in advance of the 3-year-old Brutal (NZ) (O’Reilly {NZ}) as Winx raced well out into the track and settled last but one.

Kept in the clear and out of harm’s way down the side meant that Winx would be consigned to a wide run on the bend, but she nevertheless crept closer and was ready to pounce four or five deep off the final corner. Allowed to amble up to draw on even terms with Hugh Bowman merely pointing her in the right direction, Winx was finally thrown a few crosses of the reins and lengthened clear for another condescending triumph to take her career earnings to over $24 million.

“When I asked her to stretch she responded and you could hear was the crowd roar." - Hugh Bowman

The final margin was 3.5l over Brutal, with another 2.8l back to Dreamforce in third. Winx will sign off on her historic career when she goes in search of a third G1 Queen Elizabeth S. at Randwick on Apr. 13.

A home track and the roar of the crowd

“When I asked her to stretch she responded and you could hear was the crowd roar,” Bowman said. “The excitement and the emotion, she responds to that as well as anything else, and once again I am just so proud of her and proud to be a part of it.”

For the third straight year, the Ryder was run over very easy ground that was much to the mare’s liking, according to her rider.

“Because she works on the track she is very comfortable and has a lot of confidence on it." - Hugh Bowman

“The ground today, although it’s a beautiful afternoon, the ground is significantly testing, and it was quite similar to how it was two years ago when she annihilated Le Romain (Hard Spun {USA}),” Bowman added.

“Because she works on the track she is very comfortable and has a lot of confidence on it. I think that helps her to perform.”

Herself a $230,000 graduate of the Magic Millions Gold Coast Sale in 2013, Winx is a half-sister to the ill-fated ‘TDN Rising Star’ El Divino (Snitzel), who shared the spoils with Astern (Medaglia d’Oro) in the 2016 G3 Kindergarten S.

Winx’s 2-year-old half-brother Courchevel (Snitzel) has been retained by John Camilleri’s Fairway Thoroughbreds and is under the care of Ciaron Maher and David Eustace, but has yet to trial. Vegas Showgirl is the dam of the yearling Exceed and Excel filly Covent Garden, her most recent listed produce.