A fairytale first All Star Mile

5 min read
The darling of Tasmania, Mystic Journey, has captured the hearts of the Australian racing industry this year. Her win in the inaugural All Star Mile will be remembered as much for the lifechanging moments she has provided her connections, as the dazzling performance she put in.

Mystic Journey, affectionately known as “Betty” in the stable, was caught three deep midfield, but in spite of the tough run finished too strongly for the James Cummings-trained pair Hartnell (Authorized {IRE) and Alizee (Sepoy) to run home a comfortable 1 ¼ length winner in the inaugural running of the $5 million All-Star Mile.

The Adam Trinder-trained three-year-old was on the outside of the All-Star field when public voting concluded, but earned a wild card start with her sensational win in the Group 1 Australian Guineas (1600m) at Flemington on March 2.

Winning jockey Anthony Darmanin was elated after the effort, standing high in the irons raising his arm into the sky. 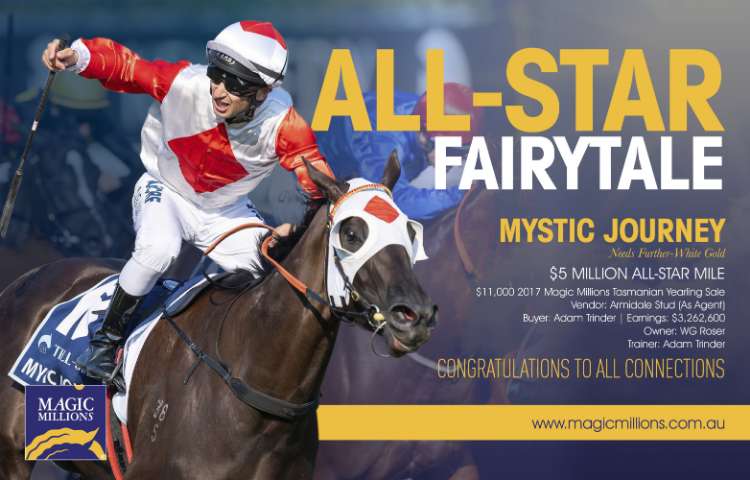 Mystic Journey has been touted as the heir-apparent to Winx, who has won at her past 31 starts and holds a world record 23 Group 1 wins and will soon retire. Mystic Journey has won six straight and boasts a record of 10 wins from her 13 starts.

Trinder will spell Mystic Journey now and bring her back for a crack at the Cox Plate (2040m) – a race Winx has won four times - next October.

“She just keeps going to a higher level every time she races." - Trainer Adam Trinder

“She just keeps going to a higher level every time she races,” Trinder said. “She looked magnificent when she won on Cox Plate day last year and we are hoping we can get her back there for the big one.

“I don’t know where the bottom of her is to be honest. She is only a young filly. We’ll protect her and she might be able to take over the mantle from Winx."

“She was the first Tasmanian-trained Group 1 winner on the mainland in 133 years and she has now won the richest mile race in the world. She is very special to us and all Tasmanians.”

For all parties involved in this incredible filly, the rise of Mystic Journey has been a fairytale story.

Darmanin was a battling jockey before Mystic Journey – an $11,000 purchase at the Tasmanian Magic Millions Yearling Sale, swept him to the dizzy heights. He will be taking off soon to ride in Dubai.

“I cannot believe it,” Darmanin said. “She just travelled so sweet in running. Look she was deep but she was happy to be there. I thought I had the front runners covered and I was just hoping there was nothing coming home strong behind me."

I thought I had the front runners covered and I was just hoping there was nothing coming home strong behind me." - Jockey Anthony Darmanin

“I just can’t thank her and Adam (Trinder), who has placed her so well at each start, enough."

“My family is here, and my mum is at home recovering from illness. I just can’t believe it."

“If she didn’t win two weeks ago she wouldn’t have got the wild card. I will be partying hard tonight, then I will be off to Dubai and that is another journey I will be on.”

Darmanin, 36, has been riding for 18 years and ridden about 730 winners. He has seen his most value as a track rider, working full-time for leviathan owner Lloyd Williams at his Macedon Lodge property.

Williams values Darmanin’s strong work ethic and his expert timing when riding his horses work. On weekends Darmanin travels to Tasmania where he takes his only race rides.

A fortnight ago Darmanin rode his first Group 1 winner on Mystic Journey and today he won the first running of the All-Star.

“She just keeps raising the bar each time I ride her,” Darmanin said. “She is simply amazing. Lloyd has got some pretty good horses, but she has got something special.”

For owner Wayne Roser, who has been a stalwart of the Trinder stable and a buyer at the Tasmanian yearling sale, the win is dream come true.

"It is all so surreal.” - Owner Wayne Roser

“She gives 110 percent every time she races and today was no exception,” Roser said.

The Mystic Journey ride for the owners of Armidale Stud David and Robyn (David’s mother) Whishaw has been an emotional experience.

David took over the running of the Armidale Stud, at 19 years old, following the sudden death of his father Denis.

Denis, 50, had died while trimming horse’s hooves at the family’s thoroughbred breeding property. The youngster lashed out and kicked Denis and the force of the blow triggered a fatal heart attack.

The family has been approached by mainland studs to secure Needs further, but remain steadfast about keeping him.

For Damien Murnane and his wife Jenny Mystic Journey’s win provided a windfall $250,000 for the couple as the ambassadors of the All-Stars.

Murnane was one of thousands, who participated in the public voting for a runner in the All-Stars and was lucky enough to draw the winner.

He had been unemployed for the past six months but will start a new job on Monday.

The news was disappointing for Sydney star Happy Clapper, who faded from a prominent position to finish eighth, with Racing.com reporting the eight-year-old pulling up with exercise-induced pulmonary hemorrhage. He will need a veterinary certificate of soundness before he can race again.

Urban Ruler, who led the public vote for the All-Stars until the final day and was at $201, finished last.