3 min read
Barend Vorster stopped short of comparing Sunlight to Singaporean superstar Rocket Man but said the speedy 3-year-old is headed in the right direction after an impressive win in the G1 Newmarket Handicap.

Barend Vorster had been based in Singapore for 15 years, where he won a premiership in 2004, won 781 races and won six races from seven rides on Rocket Man (Viscount) .

The South African joined trainer Tony McEvoy just last week and his lightweight status had him thrown straight into the deep end on the lightly weighted Sunlight (Zoustar).

"It is hard to put anything up there with Rocket Man but she has great qualities about her, she does everything right and she is heading in the right direction to follow in the footsteps of a horse like that," said Vorster, who had ridden Sunlight in an impressive jump-out last week, just hours after stepping off a plane. 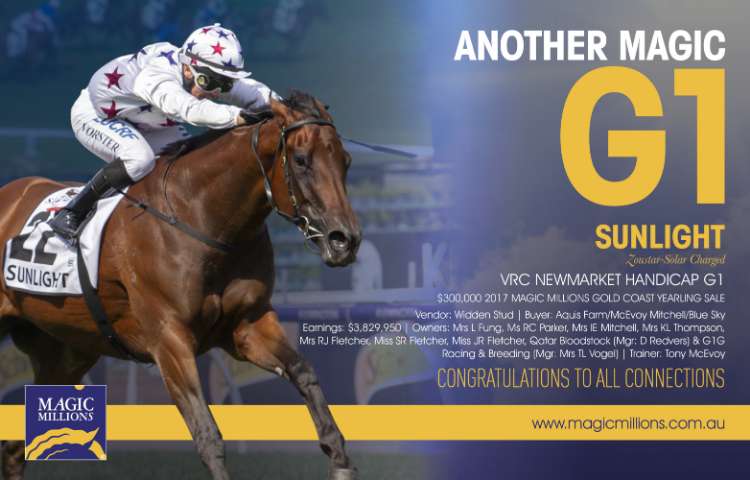 Vorster was having his first race ride up the tricky Flemington straight and faced 21 rivals but utilised Sunlight's speed to have the filly in front and travelling smoothly soon after jumping.

"Once I got on to that, I just left her there, I had horses go with me to my girth but never right up alongside me so she just relaxed beautifully. Through the 400m I just let her slide along, and I gave her one or two reminders, on her left, she just changed over and quickened away."

McEvoy delighted with horse and jockey

McEvoy was obviously thrilled with a filly that is now a two-time G1 winner following her tough win against the colts in the G1 Coolmore Stud Stakes in the spring.

The trainer was clearly chuffed with his decision to bring the experienced Vorster to Australia, joking “That’s some start for Barend, he’s going to be good in Adelaide.”

“When he read that Jamie Kah and I were splitting he was the first to apply. I couldn’t spell his name for a start. "

“We walked this track for two hours yesterday and we had a plan to come to the outside, we just couldn’t quite get there, there was a horse just on his heels and he couldn’t get right out there. "

“He didn’t panic he showed his experience and the filly rallied."

“For Barend to come here and handle an occasion like today is great, but he’s 41, he’s not a new kid on the block.”