A Tasmanian fairytale in the Australian Guineas

The star filly, and $11,000 yearling purchase, provided a career highlight for all of those involved. It was the first Group 1 victory for her journeyman jockey Anthony Darmanin as well as for her trainer Adam Trinder and owner Wayne Roser. It was also a first top-flight winner for her sire Needs Further and Armidale Stud, who foaled and raised the filly. 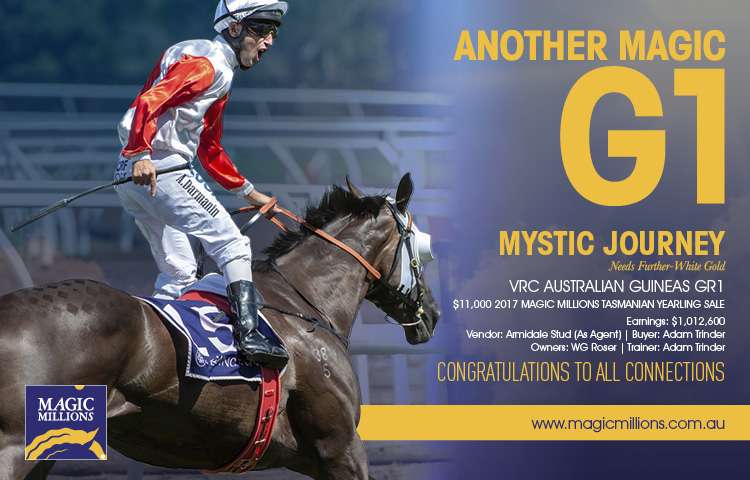 Barrier 1 had offered some concern given her racing style, but from the moment Mystic Journey jumped and Darmanin settled her three back on the rail, there was little to worry about.

Hawkshot (Fiorente {Ire}) set the pace, and gave a strong kick on straightening, but Mystic Journey got a run on the inside of fellow Tasmanian The Inevitable (Dundeel {NZ}), and then powered through under Hawkshot to win going away by 2.25l, with Amphitrite (Sebring) in third.

She becomes just the fifth filly, the first since Mosheen (Fastnet Rock) in 2011, to win the race and the first Tasmanian-prepared horse to win a Group 1 equivalent since Malua (St Albans {GB}), who won the 1886 Australian Cup.

"She's a fantastic filly," Trinder said. "That makes our assignment a lot easier at home. The team at home do a fantastic job with these horses and it’s good to be able to showcase that on the main stage."

"I said to Darmanin when I legged him on, trust her." - Trainer, Adam Trinder

"I said to Darmanin when I legged him on, trust her. She’ll be there for him when he required her and she was."

Trinder parted with just $11,000 for the filly out of White Gold (Colombia {NZ}) at the 2017 Tasmanian Magic Millions Sale.

"We bought her and we thought she was a lovely cheap little filly that would go out and do a job for us. Not in our wildest dreams did we think that job would be in a Group 1," he said.

"This was Leah's filly at the sale, my fiancée, and it's terribly satisfying."

Trinder is a former jumps jockey who was good enough to win the Grand National Steeple and Hurdle and is now one of Tasmania's leading trainers.

'We thought she was a lovely cheap little filly that would go out and do a job for us. Not in our wildest dreams did we think that job would be in a Group 1." - Adam Trinder

For Darmanin, who has commuted to Tasmania for the past six years because of limited opportunities in his home state of Victoria, while also riding work at Macedon Lodge, it is his biggest moment.

"It’s unbelievable, I just can’t believe it. I never thought I’d get a Group 1. It’s just amazing. I can’t thank Adam enough and Wayne and the connections of this beautiful Tassie horse. She is like the Winx of Tassie," he said.

Darmanin said he never really had any concern about how Mystic Journey travelled in the run.

"She relaxed really good in the race, I was pretty much box-seating. She was a bit intimidated to go through the gap, but once she went through it. She's got that great turn of foot. She exploded away," he said.

"She is like the Winx of Tassie." - Jockey, Anthony Darmanin

The same track and distance awaits Mystic Journey in two weeks' time in the form of the inaugural $5m All-Star Mile. She missed out on the popular vote but is very likely to receive a wildcard for that race.

"We will see what transpires in the next 48 hours, but we’d be hopeful if she pulls up alright, which I trust she would. I'd like to give her an opportunity in that race," Trinder said.

It a massive result for Tasmania's leading breeder Armidale Stud, run by David and Robyn Whishaw, who were considering their future in the industry when Needs Further arrived at the stud six years ago.

The son of Encosta De Lago has turned all that around, and now thanks to the filly from his second crop, he is a Group 1 winning sire.

While foaled and raised at Armidale, Mystic Journey was bred by Victorian breeder Ralph Zito, wife Peta and friends Joe and Rhonda Cichello and John and Diane Button.