8 min read
Widden Stud stallion Star Witness has won over buyers at the top end of the market at the Inglis Classic Yearling Sale with a pair of quality youngsters topping days two and three at the Riverside Stables.

Inglis Classic Day 3: At A Glance

>> Star Witness is enjoying a strong sale and for the second day running he tops the session with a $350,000 filly to Orbis Bloodstock.

>> A son of Kermadec (NZ) gets serious attention from Triple Crown Bloodstock and they secured him for $280,000.

>> George Moore is a member of the Dissident fan club and he parted with $280,000 on spec for a colt by the multiple Group 1 winner. 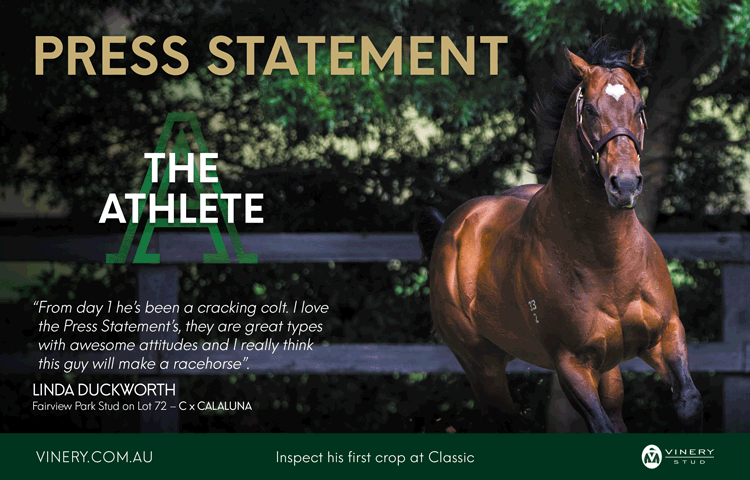 Widden Stud stallion Star Witness has won over buyers at the top end of the market at the Inglis Classic Yearling Sale with a pair of quality youngsters topping days two and three at the Riverside Stables.

A speed machine with a G1 Coolmore Stud S. to his credit, Star Witness’ son offered by Noogee Park was sold for $400,000 on Sunday to Yulong and on Monday the Hong Kong-based Orbis Bloodstock went to $350,000 for the Newhaven Park-offered filly.

Lot 475 is out of Madam Nash (Flying Spur), who won on eight occasions and she is a grand-daughter of Tidal Light (NZ) (Diagramatic {USA}), a Group 1 winner on both sides of the Tasman and a New Zealand Horse of the Year.

Trainer Kim Waugh has been associated with Orbis for the last 12 months and she signed for the good-looking filly.

“She’s beautiful, very athletic and correct. I was very impressed by her,” she said. “I kept going back to look at her, four or five times, and I liked her more every time.

“I’ve had a couple by Star Witness and I really like them. He’s proven himself with a lot of winners and a couple of very good horses.”

“I kept going back to look at her, four or five times, and I liked her more every time.” – Kim Waugh

Orbis is managed by former jockey Paul King with Waugh and Kris Lees their principal trainers in Australia.

“It’s working really well and at this stage I’ve mainly got all young horses,” Waugh said.

Military Zone (Epaulette) did his younger half-brother a major favour when he opened his stakes account with victory in the recent Listed Gosford Guineas and that was reflected in the ring.

The Two Bays Farm-offered colt by Kermadec (NZ) won over Triple Crown Bloodstock and they stretched to $280,000 for Lot 457.

“He’s a big strong colt and a great mover like a lot of the Kermadecs are,” Michael Ward said.

“He’s a big strong colt and a great mover like a lot of the Kermadecs are.” - Michael Ward

“Obviously we race Military Zone and we think he has Group 1 potential so we’re thrilled to get him.”

The youngster is out of the Street Sense (USA) mare Loading Zone and she is a half-sister to the dam of the G2 Sweet Embrace S. winner Scarlet Rain (Manhattan Rain). It is also the family of the two-time Group 1 winner and sire Toorak Toff (Show A Heart).

Sledmere Stud was celebrating after their good-looking son of Dissident attracted widespread attention in the ring with the bidding duel finally won by Hong Kong-based bloodstock agent George Moore.

Lot 417 realised $280,000 and is the first foal of the unraced Northern Meteor mare Keep Warm, who is a three-quarter sister to the G1 Flight S. and dual Group 2 winner Speak Fondly.

Her half-brother Wild And Proud won the G2 Hobartville S. and this pedigree also features the G2 QTC Cup winner Spill The Beans (Snitzel), whose fledgling stallion career is underway at Aquis.

“It’s the third Dissident we’ve bought and we think he will make it as a stallion.” – George Moore.

“We bought him on spec. We don’t have a client right now so obviously we’ll try and sell him in the next week and export him to Hong Kong,” George Moore said.

“It’s the third Dissident we’ve bought and we think he will make it as a stallion. This is a good type of horse to spec on and the best mover in the sale.

“He’s got a good over-reach and good drive behind. He’s the type of horse I like to buy and obviously there was a lot of competition from Hong Kong for him.

Domeland has been active on all three days of the sale and they were in the mix again when going to $250,000 for a son of Not A Single Doubt put forward by Canning Downs Stud.

The colt is a brother to the three-time winner Never In Doubt with their dam Infinito (Encosta de Lago) a daughter of the G2 Tristarc S. winner Infinite Grace (Prince Of Birds {USA}) and she placed three times at the top level.

This is also the family of the two-time G1 Cox Plate winner Fields Of Omagh (Rubiton).

Barnmate to Not A Single Doubt, promising young stallion Dundeel (NZ) had Lot 433 sold for $250,000 to trainer Paul Perry. Dundeel (NZ) is in hot form as a sire with son Castelvecchio taking out the $2 million Inglis Millennium.

A daughter of Brazen Beau proved popular in the ring with Lot 366 from Yarraman Park Stud eventually knocked down to Damion Flower’s Jadeskye Racing and Brad Widdup for $220,000.

“Brad and I tried to get two last year and missed out, we really liked Accession,” Flower said.

“This is a lovely filly. She’s got a lovely body, very athletic with a good walk and she looks like she’ll run early.

“She’s just the type of Brazen Beau we wanted.”

“She’s got a lovely body, very athletic with a good walk and she looks like she’ll run early.” – Damion Flower.

She is a half-sister to the dual South African Group 2 winner and multiple Group 1 placegetter New Predator (New Approach {Ire}),

Their dam Head Over Heels (Fastnet Rock) is a half-sister to the three-time black type winner Presently (Unbridled’s Song {USA}) and to the dam of the G2 Sarten Memorial and G2 Matamata Breeders’ S. winner Serena Miss (NZ) (Iffraaj {GB}).

The Brazen Beau filly’s price was matched by a son of Zoustar, who was signed for by John Foote.

Leading young stallion Zoustar made an impact deep into the session when his colt, Lot 547, was sold to Carmel Size for $220,000

It is also the family of the G1 Thorndon Mile winner Sir Kinloch (NZ) (Rhythm {USA}) with an international flavour added to the page by the presence of G3 Newmarket Nell Gwyn S. winner Soliloquy (GB) (Dubawi {Ire}).

He is a half-brother to two winners with the dam Jive Lady (Distant Music {USA}) a half-sister to the G2 Rose Of Kingston S. winner Vormista (Testa Rossa). She also finished runner-up at Group 1 level three times.

“He’s a tall colt with a lot of scope and with a huge girth,” Le Metayer said. “I’ve looked at pretty much every horse here this week and for me he was one of the stand-outs.

“I buy mainly on type and bought him for a Hong Kong client. He’ll go to Archie Alexander to be pre-trained and trained and if he’s good enough he’ll end up in Hong Kong.”

A daughter of young sire Deep Field took trainer Tony McEvoy’s eye and he went to $220,000 for Lot 446 from Glastonbury Farms.

She is out of Legato (Danehill {USA}), who is a half-sister to the G2 Bill Stutt S. winner Schubert (Salieri {USA}).

The former champion Singapore galloper Recast (Thunder Gulch {USA}) is also a member of this family.

Next article
Freshmen make their mark at Riverside