9 min read
Yulong is a relative newcomer to the Australian thoroughbred scene, but it hasn't wasted any time in establishing itself as a major breeding, racing and buying force from the farm's Victorian base.

Inglis Classic Day 2: At A Glance

>> Major thoroughbred player, Yulong Investments flexed their muscles and shut out the opposition for the top lot with a $400,000 play for a son of Star Witness.

>> Domeland digs deepest to secure a flashy grey colt for $280,000 out of the draft of Vinery Stud.

>> Glenlogan Park Stud’s changed business model nets them $250,000 for a filly from the first crop of Exosphere.

>> Pick of Segenhoe draft goes to Tony McEvoy, who bought the full-brother to the Dissident filly last year. 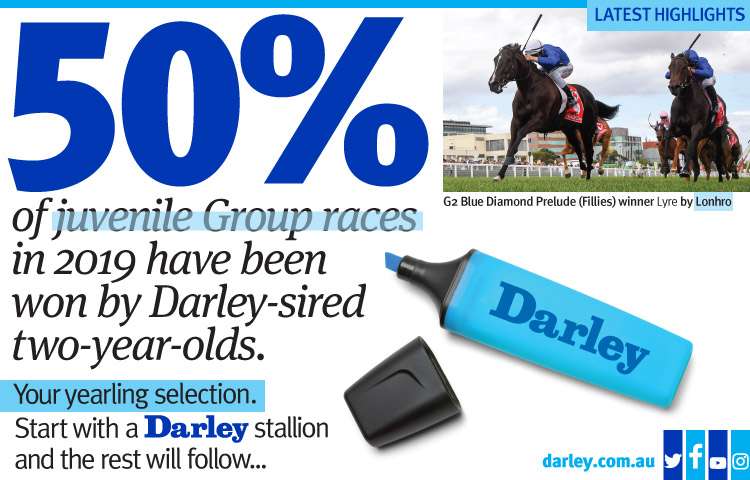 Yulong is a relative newcomer to the Australian thoroughbred scene, but they haven’t wasted any time in establishing themselves as a major breeding, racing and buying force from their Victorian base.

Owned by Chinese businessman Zhang Yuesheng, Yulong has become a major player with three properties for his 130-strong broodmare band, racehorses and the current development of a state of the art stallion complex.

Yulong’s Australian operation is managed by Sam Fairgray, who went to $400,000 during the second session of Inglis’ Classic Yearling Sale for Noogee Park’s colt by Star Witness, the top lot of the day.

Lot 249 is out of Defrock (Canny Lad), a sister to the G3 Up And Coming S. winner Blackball and the family of the multiple Group 2 winner Hosannah (Octagonal {NZ}).

“We identified him as one of the nicest horses we have seen at the sale so we are really pleased to add him to our racing group,” Fairgray said.

“He is a big strong colt and we can't wait to get him in our programme. Hopefully, we can come back and win the $2 million race next year.

“Hopefully, we can come back and win the $2 million race next year.” – Sam Fairgray.

“He is a lovely colt with a nice temperament. He was one of the nicer horses here so it was a great result.

“I think the nice horses are selling very well. There was strong competition for that colt, you have to pay that little bit extra for the nice ones.

“The colt was a little bit more than what we thought he would be, but sometimes that's what it takes to buy the ones you want. “

“There was strong competition for that colt, you have to pay that little bit extra for the nice ones. “ – Sam Fairgray.

Fairgray also signed at $150,000 for the following Lot 250, a daughter of Charge Forward and Defying Gravity (Flying Spur) from Lime Country Thoroughbreds’ draft.

“She’s very attractive with a nice temperament,” Fairgray said. “She is a nice-moving filly and she reminds me of Estijaab's dam Response.

“Charge Forward is doing a good job as a broodmare sire. She is a nice filly and we are pleased to take her.

The late Stratum made a strong impact when his striking grey colt sparked a bidding duel finally won by Domeland with a closing say of $280,000 from the Vinery Stud draft.

Lot 242 is the first foal of Dayeala (NZ) (Starcraft {NZ}) and her dam is a three-quarter sister to the multiple Group 1 winner and former champion Irish 2 and 3-year-old Grey Swallow (Ire) (Daylami {Ire}).

“He is a very active horse from a great family,” Domeland’s Bloodstock Manager Kevin Connelly said.

“This is our fourth year back in the Australian market.” – Kevin Connelly.

“That colour makes him all the more special. Those types of horses appeal and there aren't too many of his type here.

“This is our fourth year back in the Australian market. We will be back at Easter and maybe Melbourne as well. At the moment we have 28 horses in training.”

Stratum was a long-time resident of Widden Stud until the G1 Golden Slipper winner suffered a fatal heart attack in 2016.

Glenlogan Park Stud has radically altered its business model in recent years and the Queensland operation reaped rewards of their changes on Sunday.

In 2017, Glenlogan announced they would no longer be a stallion farm with the emphasis switching to breeding and selling yearlings at all the major sales.

“Before we were standing stallions and we had a lot of colts. Now we are a private farm and don't have clients,” Steve Morley said.

“All of the yearlings we offer at sales are Glenlogan-owned, we are just a smaller, boutique farm that is focusing on quality.

“We mated 55 mares this season, so going forward we will grow the numbers we present in our drafts.” – Steve Morley.

“We are breeding for the national scene and we want to be presenting yearlings at all of the premier sales. Our focus is really changing and it will be an evolving process.

“We mated 55 mares this season, so going forward we will grow the numbers we present in our drafts.”

Glenlogan had high hopes for their Exosphere filly, Lot 182, on Sunday and she was the subject of spirited bidding before she went to P. Karlsson, of New South Wales, for $250,000.

Exosphere won five races when trained by John O’Shea with his career highlight a victory in the G1 Golden Rose S. and he was also successful in the G3 Roman Consul S. before his retirement to Darley.

“The reality is that she is exactly what you want to see in any yearling you present. She has exceptional quality.” – Steve Morley.

His Glenlogan-offered daughter is out of the Cape Cross (Ire) mare Casilda (Ire), who won twice and was placed in the G3 Newmarket Dahlia S. who has produced the stakes performer Thief Of Hearts (Show A Heart).

Casilda is a grand-daughter of the G2 Prix de Malleret winner Kozana (GB) (Kris {GB}) with a headline act on this pedigree page the multiple Group 1 winner and champion sire High Chaparral (Ire). His brother Black Bear Island was no slouch either and won the G2 Dante S.

“The reality is that she is exactly what you want to see in any yearling you present. She has exceptional quality,” Morley said.

“Joe Pride is a quality horseman who can train to the highest level.” – Steve Morley.

“She uses herself really well in the way she moves and she has that Lonhro quality about her. She just had lots of people talking, every second parade we did was for her, we knew there was going to be really good competition for her."

The boutique breeding enterprise was also delighted when they learned that she will be trained at Warwick Farm by Joseph Pride.

"We are thrilled with the stable she is going to,” Morley said. “Joe Pride is a quality horseman who can train to the highest level.”

Successful trainer Tony McEvoy took a shine to a Dissident filly, Lot 194, and went to $160,000 to secure her from Segenhoe Stud’s consignment.

“The full-brother I bought last year is a really nice horse. He is a little immature still, but he can really gallop,” McEvoy said.

“He is going to be a smart horse. I liked this filly. She is very sweet with a lovely nature and a good eye. She moved well so I was happy to take her home.

“If I am right about the colt, then she is a safe bet.”

“If I am right about the colt, then she is a safe bet.” – Tony McEvoy.

They are out of the unraced Celtic Sea (Fastnet Rock), a half-sister to the G3 Vain S. winner Tony Nicconi (Nicconi).

“She was the pick of our draft. She is out of a Fastnet mare and she looks like a colt, she looks a precocious type,” Segenhoe General Manager Peter O’Brien said.

“Tony McEvoy bought her and he bought the full-brother to her last year for $400,000. I am assuming the full-brother is okay. I looked him up and he was unnamed, but maybe he will be named tomorrow!

“She was one of the best fillies at the sale this year by type and Tony always buys a good-looking horse. There is a lot of Fastnet Rock in her, a lot of substance and she looks like she could go early.”

“She is beautifully put together, a racy filly.” – Peter O’Brien.

Lot 190 from Segenhoe had earlier left the ring with a $100,000 price tag with trainer Robbie Griffiths the purchaser. The Fastnet Rock filly is closely related to the Group 1 performer and sire Stryker.

“She wasn't big and that's the reason she was here and not Easter, but the family is all small,” O’Brien said.

“She is a beautifully put together, a racy filly. Robbie Griffiths bought her and Matt Dunne was the under bidder. We were happy with that sale.

“I think what she lacks in size she more than makes up for with athleticism and I think they bought really well.

“The reality is the market has been incredibly buoyant and it is unfair to compare this sale to last year.

“The complex had just opened and a lot of people came for the opening. There hasn't been many surprises and when people get their head around where the market is at, I think it will improve."

Next article
Girl 'one in a million' for Segenhoe