5 min read
A mountain of hard work behind the scenes by the Inglis staff has the auction house’s General Manager of Bloodstock Sales Sebastian Hutch in a bullish mood ahead of the opening session of the Classic Yearling Sale on Saturday evening.

The first youngster will go through the ring at the Riverside Stables at 6pm and the quality and depth of the catalogue has the company confident of satisfaction from both sides of the fence - the sellers and the buying bench.

“We’ve done a huge amount of work ahead of the sale,” Hutch said. “Obviously, our primary objective is to be selling as many horses as possible and if at the end of the sale the vendors and buyers are happy with the results then we’ve achieved our goal.”

Hutch was also buoyed by the positive atmosphere around the complex in the lead-up to the sale.

“There’s a strong group of people here with what is looking a very good buying bench and a huge number of people looking at plenty of quality horses.” - Sebastian Hutch.

“There’s a strong group of people here with what is looking a very good buying bench and a huge number of people looking at plenty of quality horses,” he said.

“The results of the sale graduates in the last 12 to 24 months have been outstanding and stand up to the closest of scrutiny. 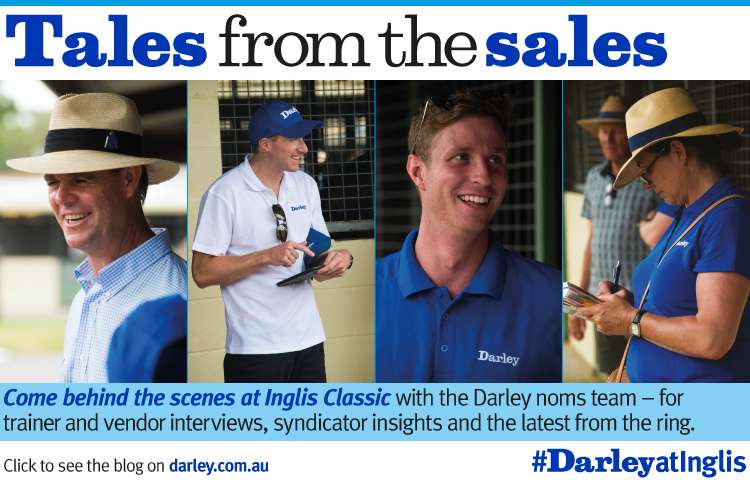 “There will be great value on offer and, as an example, the Golden Slipper winner (She Will Reign) was sold here in 2016 for $20,000. The vibe around the place is very positive.”

“This is a robust industry that has coped admirably with various challenges over the decades.” – Sebastian Hutch.

While the Darren Weir debacle has cast a long shadow over the thoroughbred industry, Hutch is taking a glass half-full approach.

“This is a robust industry that has coped admirably with various challenges over the decades,” he said.

“It marches forward and I expect it to do so in this instance. It’s opened up huge opportunities for other trainers to show their qualities and see the positives in the situation.”

“It’s fantastic to have 2-year-olds competing that will be candidates for Group 1 races later on.” – Sebastian Hutch.

Excitement is also mounting around the Warwick Farm race day on Saturday with the runnings of the $2 million Inglis Millennium and the $1 million Inglis Sprint.

“The Millennium has attracted an excellent field. It’s fantastic to have 2-year-olds competing that will be candidates for Group 1 races later on,” Hutch said.

“The market suggests the Sprint is a two horse race, but there is a great depth there as well.”

The first of the expected premier listings through the ring during Saturday evening’s opening session is Lot 13, a son of Written Tycoon from Tyreel Stud’s draft.

The colt is out of Wildenstein (Redoute’s Choice), who was successful on two occasions, and is a half-sister to the Listed Widden S. winner Superfly (Rock Of Gibraltar {Ire}). Their dam is the Listed Keith McKay H. winner Allez France (Hennessy {USA}).

Lot 19 by Vancouver from Twin Hills Stud is the first foal of Zeitlin (Street Cry {Ire}) and she is out of a half-sister to the G1 Clairwood Mercury Sprint winner and former champion German sprinter War Artist (Orpen {USA}). He is also placed in a number of Group 1 international sprints.

The Gold Riband Session, which picks out selected elite lots in the catalogue, kicks off at Lot 58 and continues through to Lot 120.

Middlebrook Valley Lodge is sure to have high hopes for Lot 73, a son of Zoustar and Calypso Queen (Lonhro), a half-sister to the G2 Reisling S. winner Military Rose (General Nediym).

From Eureka Stud comes Lot 88, a full brother by Spirit Of Boom to the Inglis 2YO Premier winner Kinky Boom. The family also features the Listed winner and Group 1 placegetter Brianna (NZ) (Sudurka).

A filly by Snitzel, Lot 102, is a choice offering from Bhima Thoroughbreds and is out of a half-sister to the G1 Chipping Norton S. and G1 Rosehill Guineas winner He’s No Pie Eater (Canny Lady). This is the family of the champion stallion Redoute’s Choice. Her sister Special Date, trained by Brad Widdup, looked smart when winning her trial at Hawkesbury on Friday.

Ashleigh Thoroughbreds will present Lot 103, a daughter of Pierro and Rock Beauty (Stratum). The dam won twice and is out of a half-sister to the G2 Champagne S. winner I Am A Ripper (Mukaddamah {USA}). The family also includes Murphy’s Blu Boy (Blu Tsunami {USA}), who was successful in the G3 Blue Diamond Preview.

From the same consignor comes Lot 105, a filly by I Am Invincible and Runs Deep (Strategic), who is a half-sister to the Listed Castletown S. winner Excellent Reward (Exceed And Excel).

A headline act in this pedigree is the former champion Australian 2-year-old and G1 Blue Diamond S. hero Earthquake (Exceed And Excel).

Dissident’s daughter, Lot 110, is another to bring a quality pedigree to the ring for vendors Carramar Park. She is out of a three-quarter sister to the G1 Orr S. and G3 Schweppervesence Cup winner Shinzig (Danehill {USA}).

Lot 113 from Kenmore Lodge is an Exceed And Excel filly out of Tanaami (God’s Own), who is a half-sister to the G1 Caulfield Guineas winner and G1 Cox Plate runner-up Wonderful World (Agnes World {USA}).