6 min read
At only 29, Richard Litt is one of Sydney's youngest trainers and gets his first shot at a big race with Dundeel (NZ) colt Castelvecchio in Saturday's $2m Inglis Millennium.

Richard Litt doesn't want for youthful ambition. But he is not afraid of allowing himself a bit of a 'pinch yourself' moment ahead of Castelvecchio's (Dundeel {NZ}) run in Saturday's inaugural $2m Inglis Millennium at his home track of Warwick Farm.

One of the youngest metropolitan trainers in Sydney, Litt, 29, has only been operating his stables for a couple of years and Castelvecchio represents his first shot at a major race success.

"We are very excited. We are only a small little stable. It’s fantastic to have a horse of his calibre to be running in these sorts of races, definitely," Litt told TDN AusNZ. 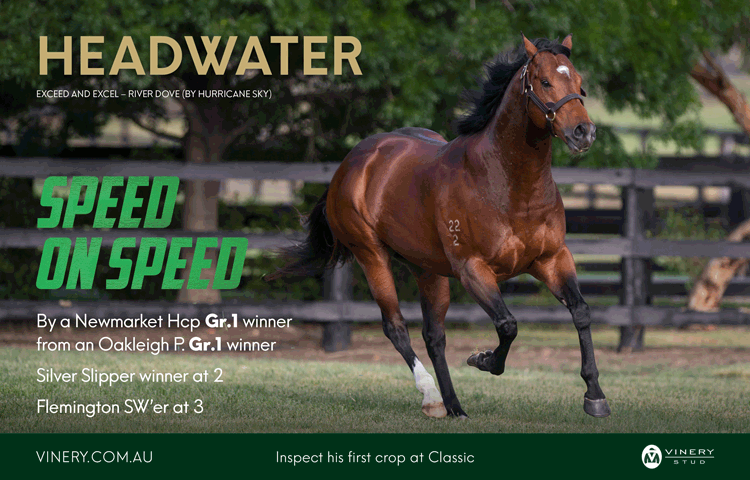 "Who would have ever thought that we'd have a runner in a $2 million race." - Richard Litt

"It's taken a few years, but I've got two young children with Laura and we pretty much do it all ourselves and we really enjoy it. We are just starting to reap the rewards now."

"Who would have ever thought that we'd have a runner in a $2 million race, let alone having it so early in your training career?"

A winner at Canterbury on debut at monster odds, Castelvecchio is given more than a fluker's hope on Saturday despite having to overcome barrier 13 in the 16-horse field.

It was owner Ottavio Galletta who plucked that number at Tuesday's barrier draw and it is he who has been Litt's greatest supporter early in his training career.

"I've trained for the Gallettas for a few years now. My father (Jim) trained for them and I took over. They’ve become our biggest and most loyal clients," Litt said.

"Last year, we went to the Classic Sale and Ottavia and John Messara picked him (Castelvecchio) out, and they bought him for around $150,000. He wasn't a cheap horse by any means."

Subsequent events have made it look a smart investment. Last spring, the colt's older half-sister Maid of Heaven (Smart Missile) won the G1 Spring Champion S. wearing the Arrowfield colours and becoming trainer Mark Newnham's first Group 1 winner. She had been a $60,000 buy at the 2017 Classic Sale.

The arrival of Castelvecchio, plus a handful of other yearlings ahead of their 2-year-old season last year was a significant change for Litt, who had previously been working mainly with tried horses.

"We've never really had the backing to buy them. A couple of years ago, I bought Lancaster Bomber (Denman) off Gerry Harvey for $30,000 at the National Yearling Sale and he went on to win a 2-year old race for me. This time last year, we went out and got or were sent six yearlings. That's the first time we’ve gone out and done that," Litt said.

"This is the first year we’ve had that flow of 2-year-olds coming through." - Richard Litt

"Glenn and Viva Williams went out and bought me a horse, and they’ve been huge supporters of all trainers. They gave me a 2-year-old (Katie's Moet (Rubick)). She's trialling on Friday. I've got another 2-year-old, Miss Monte (Fighting Sun), for some people in Ireland."

"The Gallettas bought a couple and I got another one off Lorraine Atchison (Fields Of Love (Deep Field)), who is NSW's top greyhound trainer. We had a little bit of luck and got some really nice horses. So this is the first year we’ve had that flow of 2-year-olds coming through."

Of the band of six youngsters, Castelvecchio immediately made an impression on his new trainer.

"He was always a beautiful colt. He was very light on his feet, a very good walker. He wasn't overly big, which I like in a horse," Litt said.

"There was a lot of presence about him. He wasn't the easiest horse to break in. He was a bit difficult but as we got through to him and he understood what we wanted him to do, he came through alright. He's a very laid back customer now."

After an excellent trial back in September, a plan of attack towards the inaugural $2m Millennium was formed.

"His very first barrier trial, Josh (Parr) rode him and he told us he's a very nice horse. We popped him away and put him in the paddock. We brought him back and he trialled very well at Warwick Farm," he said.

"If you watch that trial two or three times, it was a very nice barrier trial. He ran near last in it, but he was in front about 100m past the post."

Dismissed by the punters on debut at Canterbury on January 18, he drifted back to last before Parr plotted his way through the field and unleashed a powerful last 200m to win impressively.

"All the way along we thought a lot of the horse." - Richard Litt

"To be honest, I didn't think he'd come out and win like he did at Canterbury but at the same time, all the way along we thought a lot of the horse."

While the wide barrier on Saturday is not ideal, Litt said the plan was to sit Castelvecchio off an expected strong pace anyway and let him run home as he did so impressively on debut.

Reflecting on the journey

In the build up to the biggest moment of his short training career, Litt has had some time to reflect on the journey which got him to this point.

"I've had a good foundation. You are always learning in this business and I'm very open minded." - Richard Litt

Having worked with the likes of John O'Shea, Graeme Rogerson and Bart Cummings, there is no shortage of education to rely upon as he attempts to build his success.

"I've had a good foundation. You are always learning in this business and I'm very open minded," he said.

"I think the best advice I've ever had is 'a closed mouth catches no flies'. As long as you are getting out of bed every day and you are trying your best for the people who are supporting you, I think that's all you can do. There's a lot of luck involved in racing, but you have to work very hard as well."