Bolstered by the presence of a couple of star lots, Kanangra owner Fred Moses is optimistic that his draft of seven yearlings for the upcoming Inglis Classic Yearling Sale will be well-received by the market.

Kanangra is offering the half-siblings to Group 1 winning pair Under the Louvre (Excellent Art {GB}) and In Her Time (Time Thief) at the Classic Sale and already that pair are generating plenty of interest as parades ramp up through this week.

That has given Moses some added confidence in the other yearlings that Kanangra will offer at Classic, including another two in Book 1 and three in the revamped Highway Session.

"If you can show off a couple of good horses in your draft, people keep coming back to you." - Fred Moses 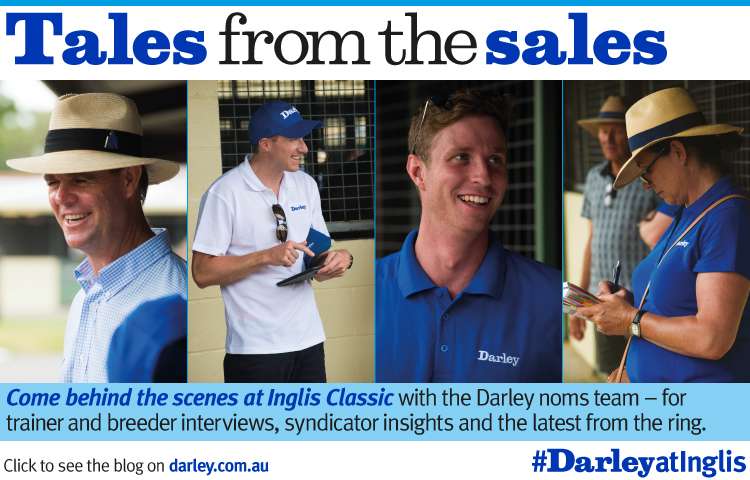 "If you can show off a couple of good horses in your draft, people keep coming back to you. They'll be busy looking at those ones and look at what else you have got," Moses told TDN AusNZ.

"You might be lucky enough to snag one away which might have ordinarily got under people's guard."

"It's interesting when you are offering smaller drafts, you wonder sometimes, whether you are better to have horses with Yarraman Park or Arrowfield and getting them doing your draft because they have got so many outstanding horses and they sell because they are there. But I think if you have another couple of good ones in your draft, you help the rest of them."

Time is right for star filly

The Artie Schiller (USA) filly, Lot 85, is the half-sister to G1 Galaxy H. winner In Her Time and shares many similar characteristics to the Time Thief filly out of Hell It’s Hot (Zedative) which Kanangra offered at the 2014 Classic Sale.

"Hell It’s Hot herself produces some amazing horses. They have all been stunners. This one is no different. They are always quite big and this one is too. She's got quite a long barrel."

This will be the eighth year in a row a yearling out of Hell It’s Hot will be offered at the Classic Sale, with In Her Time the only one to be passed in. The top-price of $210,000 was fetched for the Olympic Glory (Ire) filly sold by Kanangra to Triple Crown Syndications last year.

"She went to Snowdens and they are quite happy with her. She had a trial and has now gone out for a spell," Moses said of the filly now named Janneke.

"I'm quietly confident that this filly will do pretty well at the sale."

Lot 65 by Outreach out of Barcelona Girl (Noverre {USA}) is not only a half brother to Under the Louvre, but also three other winners.

Moses has high hopes for the colt, who is one of three from the first crop of Widden's Outreach that Kanangra will offer.

"He's a little bit too laid back if anything, he's so easy to deal with. The only downfall is now that we’ve got him down here, he seems a bit lazy about the whole thing. We've had to have a chat to him in the box and get him to lift his game."

Moses has plenty of faith in Outreach, who had four yearlings sell across the three books at the recent Magic Millions Sale and one through the NZB National Yearling Sale at Karaka.

"I think he's quite a chance of turning out to be a pretty successful stallion. It’s early days yet and I've seen a few of his produce and they all seem to have a lovely hindquarter on them," he said.

"They all seem to walk out well. For a first-season sire, and he's not an expensive sire, but I think he's a chance to be quite successful. The Exceed and Excel sires are doing quite well."

"I think he's quite a chance of turning out to be a pretty successful stallion." - Fred Moses

Moses noted that the one Outreach to go through the ring in Book 1 at the Gold Coast was bought by the man who trained him in his short career, Peter Snowden.

"Snowden always put a big wrap on him, even though he broke down on him. I noticed he bought one at the Magic Millions for $180,000. They wouldn't be backing him if they didn’t think he was half a chance of being a good sire."

The other two yearlings by Outreach offered by Kanangra are Lot 35, the filly out of Al Sahra (Desert Sun {GB}), who has already produced the Listed and recent Canterbury winner Alart (Excellent Art {GB}), and Lot 449 out of Leyenda (Hurricane Sky), who is half-sister to seven winners including Hong Kong galloper Costa Del Sol (General Nediym).

Moses is cautious about the strength of the market, while believing the revamp of Classic has delivered more quality to the sale

"The Magic Millions went off well, but I felt New Zealand was pretty flat. This comes back a bit of a level from Magic Millions, but there are some very nice horses here," he said.

"It’s hard to tell, we’ve lost one of our top trainers and that may be significant as well."

"I'm optimistic, but with a fair bit of caution, given all that is going on in the broader industry."