4 min read
Dramatic scenes at Trentham followed the running of the G1 JR & N Berkett Telegraph H. where the tightest of finishes for the major slice of the glory had judge Dick Hunt working overtime to see if a margin could separate Enzo’s Lad (Testa Rossa) and Ferrando (NZ) (Fast ‘n’ Famous).

Neither jockey involved had any idea of the outcome and, for what seemed an eternity, connections of the two sprinters wandered around with pounding hearts.

When Hunt belatedly announced it was Enzo’s Lad who had triumphed by the slenderest of margins, the sizeable support crew behind the South Island-trained 6-year-old erupted with a sea of high fives, bear hugs and tears. 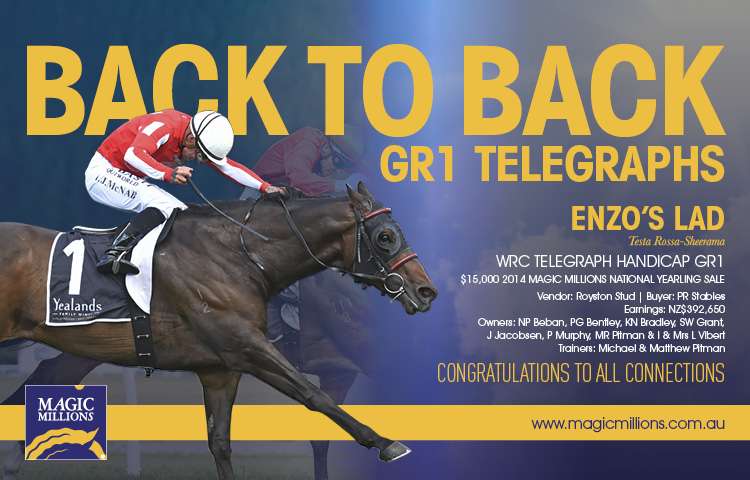 Enzo’s Lad was the defending champion, having won the 2018 edition at odds of better than 70-1 and while he was better supported for his title defence, he still slipped out at 32-1.

“We really thought he was going better this year than last.” – Michael Pitman.

“We really thought he was going better this year than last. He’s a big, strong Aussie sprinter,” said Michael Pitman, who trains with his son Matthew.

Enzo’s Lad became the first horse since a sprinting powerhouse of the late 1980s and early 1990s to complete consecutive wins in Trentham’s time-honoured feature.

“The last horse to do that was Mr Tiz. It’s a really special thrill,” Pitman said.

Enzo’s Lad has now won seven races and banked more than NZ$390,000, a substantial return on his purchase price and the prospect of national recognition.

“After we won it last year he didn’t even get a nomination as a finalist in the Horse of the Year Awards. I thought it was a joke and hopefully he might get one this time,” Pitman said.

“I bought him for $15,000 at the Magic Millions Gold Coast Sale and I had a stable at Trentham at that time.” – Michael Pitman.

“I bought him for $15,000 at the Magic Millions Gold Coast Sale and I had a stable at Trentham at that time. I syndicated to a group of Wellington owners. They are very good owners and have been very patient.

“He’s a beautiful horse and he just looked magnificent before the race.”

Successful jockey Michael McNab was in seventh heaven and struggled for words afterwards - “It’s unbelievable, just unreal,” was all he could manage.

Once a little more composed, the Cambridge jockey said Enzo’s Lad had showed a dogged will to win for his second Telegraph crown.

“My word, what a tough horse. It’s fantastic.” – Michael McNab.

“Across the junction he was bolting and then he stumbled. He mustered again and when I got out he really came after them. My word, what a tough horse. It’s fantastic.”

Pitman, who was supervising his team at the Gore meeting, also sent out a special message to McNab.

“I really want to thank Michael for riding our runners,” he said. “To win two races on Cup day is special and on two that didn’t seem to be given good chances.”

Earlier on the card, The Swiss Maestro (NZ) (Swiss Ace) was at double figure odds when he proved too strong for his Rating 65 rivals in the Stephanie Murray Mortgages Premier.

Enzo’s Lad got the deciding bob in, but Pitman said he would have been happy with a share of the prize with Ferrando, who is trained by Graeme Rogerson with his wife Debbie and his grand-daughter Bailey.

“I would have settled with a dead-heat with my good mate Rogie, but I’m glad we won.” – Michael Pitman.

“I would have settled with a dead-heat with my good mate Rogie, but I’m glad we won.”

It was heartbreak for Team Rogerson with Ferrando, who crossed from a devil of a gate to get on the pace and he kicked clear 300 metres from home, only to go down in the final stride.

Rider Matt Cameron said he had no idea who had crossed the line first.

"He got out of the gate pretty quickly and he stuck on, he’s a tough horse.” – Matt Cameron.

“I didn’t know, we were flat out. He got out of the gate pretty quickly and he stuck on, he’s a tough horse.”

The judge was unable to split the 2017 winner Signify (NZ) (Perfectly Ready) and the winner’s stablemate Sensei (Dream Ahead {USA}) for third.

“Sensei went a huge race. He was eight wide with no cover, but he’s only four and his turn will come,” Pitman said.

The disappointment of the race was the favourite Melody Belle (NZ) (Commands), who raced wide but with cover. She didn’t fire a shot in the straight and finished third last, rider Jason Waddell saying she never travelled well at any stage.