The battle for honours among the first-season sires at the Magic Millions Gold Coast Yearling Sales sees Woodside Park's Rich Enuff leading the averages at the halfway mark of Book 1, while Coolmore's Vancouver holds sway on aggregate.

The progeny of fellow Coolmore residents Pride of Dubai and No Nay Never (USA) have averaged $148,214 and $140,000 respectively, with Pride of Dubai second on aggregate having sold 14 in total.

Newgate's Super One has had an excellent start to his sales season, with seven of his first crop selling for an average of $166,429, which puts him third on the first-season averages for those who have sold four lots or more.

Magic Millions Managing Director Barry Bowditch described the performances of the first-season sires so far as solid, with an even spread across the board.

"I think they are having solid sales. They are all having an even go. Rich Enuff is leading the way in averages and he's got a lot of nice types here from a small fee. I feel the money is being spread across those first season sires at the moment," he said. 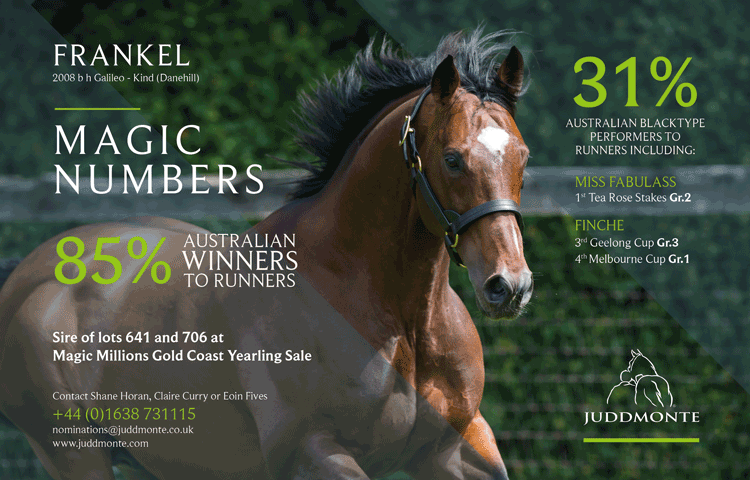 Woodside Park's General Manager James Price has been delighted with how the market have received Rich Enuff's first crop.

"The numbers are fantastic. They have all sold beyond expectation but I think the rewarding result has been the interest from syndicators and trainers. There's been a number of third, fourth and fifth inspections on these horses and there is a sort of bubbling vibe around the sale that these Rich Enuff are good sorts," he said.

"The numbers are fantastic. They have all sold beyond expectation but I think the rewarding result has been the interest from syndicators and trainers." - Woodside General Manager, James Price

"They’ve all got great hips on them, good hip lengths, really strong in their quarters. They all seem very sensible. They've got good bone about them, correct in the legs, to have an international buyer like Phoenix buy them and trainers wanting to purchase them, is great."

"I've already had 30 mares booked into him based on the results. It’s going be an exciting 2019 for him."

The top lot for Rich Enuff was sold on Day 1 for $300,000. The remaining four Rich Enuffs in the catalogue go on sale on Friday.

"There's a few more nice ones and he sits on top of the first season sire averages. I think the biggest thing breeders have to look at is the return on investment, and he's averaging 13 times his service fee," Price said.

Coolmore is pleased with what its first-season trio have produced in the opening two days.

"There has been a wonderful reaction to Vancouver’s first yearlings, selling for $400,000, $350,000, $320,000 etc. to the likes of Gai Waterhouse, Damion Flower and Francis Cook. There are a number of quality yearlings to sell in the coming days and we look forward to more great results for the breeders who have supported him," Paddy Oman, Nominations and Sales at Coolmore Australia, said.

"The Pride Of Dubai's have been very well sought after with 5 lots making $200,000 or more, and some outstanding yearlings to come in the following days. They’re extremely mature looking individuals who look like they will get up and running early, which is what the Australian market desires."

"They’re extremely mature looking individuals who look like they will get up and running early, which is what the Australian market desires." - Paddy Oman

"And the breeders who supported No Nay Never at $11,000 in his first season have been extremely well rewarded, with his first yearlings selling up to $220,000. He is one of the most exciting young stallions in the world and it is great to see the Australian buyers have such a positive reaction to him."

Super One also had a $300,000 yearling on the first day, the half to Group 1 winner Viddora (I Am Invincible).

"He's a $10,000 stallion. He's thrown really athletic, sharp, early-running, types. They have been bought by some of the best judges in the game," he said.

"He's thrown really athletic, sharp, early-running, types. They have been bought by some of the best judges in the game." - Newgate Managing Director, Henry Field

"The likes of Joe O'Neill from Prime Thoroughbreds, China Horse Club, Michael Freedman, Lloyd Kennewell, Edward Cummings. Some really top class judges. We are really thrilled to see how well they have sold."

"They will be popular all throughout the sales season, I think."