5 min read
As Yulong dug deep for another $1 million purchase, the most ever paid for a yearling by Zoustar, KBL Thoroughbreds was celebrating a life-changing moment.

KBL Thoroughbreds will be marking down the date of January 10, 2019 as the moment the Beaudesert-based operation became a producer of million dollar yearlings.

KBL's Managing Director Kandice Pritchard described the sale of the Zoustar colt they offered as Lot 320 at the Magic Millions Yearling Sale as a 'once in a lifetime moment'.

Yulong Investments paid $1.075m for the colt, the most ever for a yearling by the Widden Stud stallion, and champion trainer Chris Waller is set to take control of his racing career.

KBL, which specialises in yearling preparation, only offered its first draft last year and the best result they achieved was $150,000 for a Written Tycoon colt at last year's Magic Millions Sale. 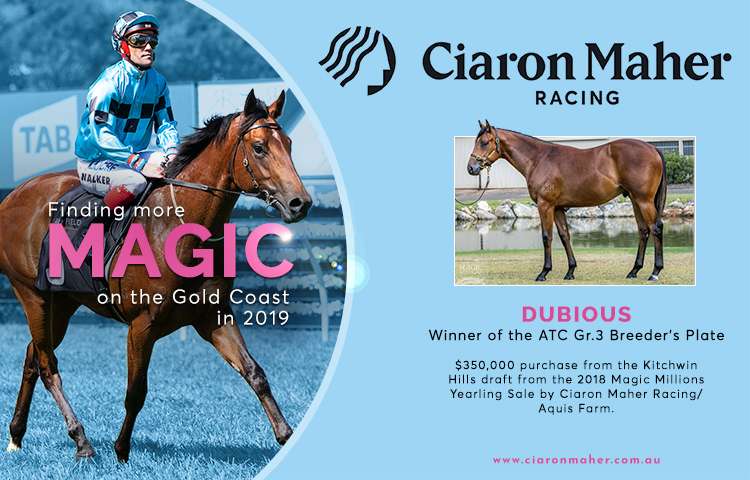 The Zoustar colt out of stakes-placed Acouplamas (Al Maher) was always the standout of their nine horse draft this year, but while interest was always high, Pritchard could never believe that would lead to a seven-figure result.

"We knew he was popular. He was having about 60 parades a day. He had 25 x-ray hits. We knew a lot of those prospective buyers were pretty serious, but we didn’t think it would be like that," she told TDN AUSNZ.

"We knew a lot of those prospective buyers were pretty serious, but we didn’t think it would be like that." - Kandice Pritchard

Bred by Bowcock Bloodstock, the colt came to KBL with an expectation that he would be well received, especially considering the hype around his stallion.

"A long-term client always sends his horses to us to prepare for the yearling sales. It is just a really good result. They’ve always supported us. So it’s really well deserved," Pritchard said.

She described the result as a moment which could prove transformative for their business.

Yulong doubles up on millionaires

For Yulong, it was its second seven-figure purchase of the sale, having parted with an even million dollars for Lot 72, a filly by I Am Invincible, on Day 1.

Yulong's Australian Chief Operating Officer Sam Fairgray was delighted to have secured the son of Zoustar.

"From day one when I inspected him he just looked the part." - Yulong Chief Operating Officer, Sam Fairgray

"We’ve been looking to find a really nice colt and we found this lovely Zoustar colt and from day one when I inspected him he just looked the part. A precocious horse, moved well, great temperament and just really excited to be able to add him to the Yulong team," he said.

Significantly, the colt will go the stables of Chris Waller, where his older half-brother the stakes-placed The August (I Am Invincible) has recently been transferred to.

Fairgray said the relationship between Yulong and Waller was being strengthened, with two of 20 horses it recently bought from Ballydoyle going to the champion trainer, as well as a recent acquisition from Germany.

"A couple of the imported horses that we bought out of Ballydoyle went to Chris. We bought the German Guineas winner, Ancient Spirit (Ger) (Invincible Spirit {Ire}), and he's in Chris's stables as well," Fairgray said.

"It’s been great to be able to secure this colt and have him go to Chris." - Sam Fairgray

"I discussed with Mr Zhang when I came on board, that I’d like to have horses with Chris and he said we can progress that in time and that's what we are doing, It’s been great to be able to secure this colt and have him go to Chris."

Yulong has made no secret of the fact it wants to develop its own stallions, and Fairgray said this colt, out of a family which has produced a successful stallion in Blackfriars (Danehill), a well as another Group 1 winner in Larrocha (Danehill), looks to fit the bill.

“To be able to take them through and hopefully win a Group 1 2-year-old race with them and then stand them at our property in Nagambie it’d be fantastic," he said.

"It’s really exciting to get a Zoustar colt. And obviously Zoustar’s going to be a stallion of the future so really pleased to have purchased this colt."

Fairgray said the one quality the colt had inherited from his sire was his temperament, and that was a key factor in deciding to pay a big price for him.

“Temperament’s a big part of it and every time we get to see him he just comes out and walks and he’s such a good natured horse so we’re really pleased to add him to the Yulong team," he said.

"He’ll head to Sydney, probably have a week or two off and then Chris will get him into the system and head towards maybe getting him to the races next year."

As for KBL, the dream of another million dollar baby will drive Prichard and her team on, Day 1 saw KBL sell an I Am Invincible colt for $250,000, while the remainder of their draft, seven horses in all;, will go in Book 2, including Lot 990, one of only two yearlings by leading first-season 2YO sire Better Than Ready.