11 min read
Two of international racing's rising powers combined to pay $1.6m for a Redoute's Choice colt from Bhima Thoroughbreds and both partners, Phoenix Investments and Aquis, expect it to be a sign of things to come in the Australian sales season.

Phoenix, an investment fund registered in Europe and the mastermind of Dubai-based businessman Amer Abdulaziz, first linked up with Aquis to buy yearlings last year and when both parties were interested in Lot 34 at the Magic Millions, they were happy to get back together.

Aquis has made a substantial investment in the Australian breeding and racing industry over the past four years and chairman Tony Fung has made no secret of the fact that he can’t climb that ladder alone, welcoming in plenty of partners along the way. 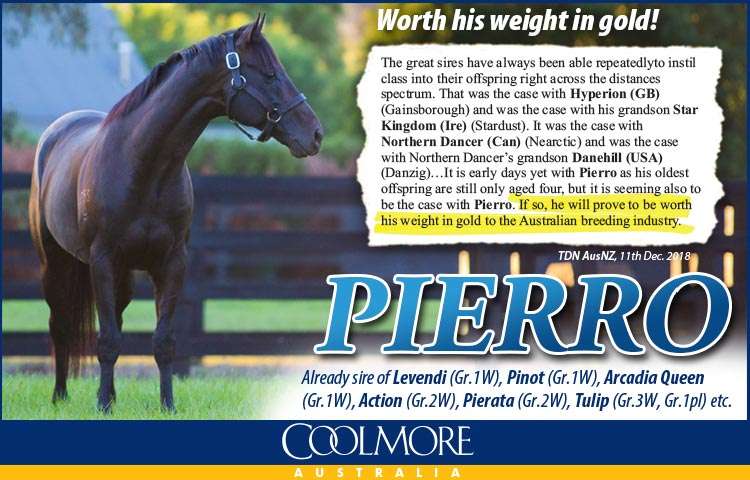 "He's a colt that we both liked. He's a great mover by a great sire," Abdulaziz told TDN AusNZ "We spoke to our partners and said this was the one we wanted to get and they agreed as well. So we went for it."

"He's a colt that we both liked. He's a great mover by a great sire." - Phoenix's Amer Abdulaziz

"With the pedigree he's got, being the best looking horse in the sale, we've definitely got high expectations of him."

The colt is out of Purely Spectacular (NZ) (Pins), making him a half brother to dual Group 1 winner Stratum Star as well as a stakes-placed filly in Serenade (Star Witness). He was sold by Bhima Thoroughbreds.

After a spirited burst of bidding, the Aquis/Phoenix teams, with Adbulaziz and Fung seated at tables next to each other in the sales ring, combined to secure the colt for the day's highest price.

"That's what you are going to have to pay for those horses," Aquis CEO Shane McGrath said. "Redoute's is a sire of sires here in Australia. He is a half-brother to a proper horse. He was our pick of the sale and the Phoenix guys agreed and he vetted out perfectly. Hopefully we have a bit of luck with him." 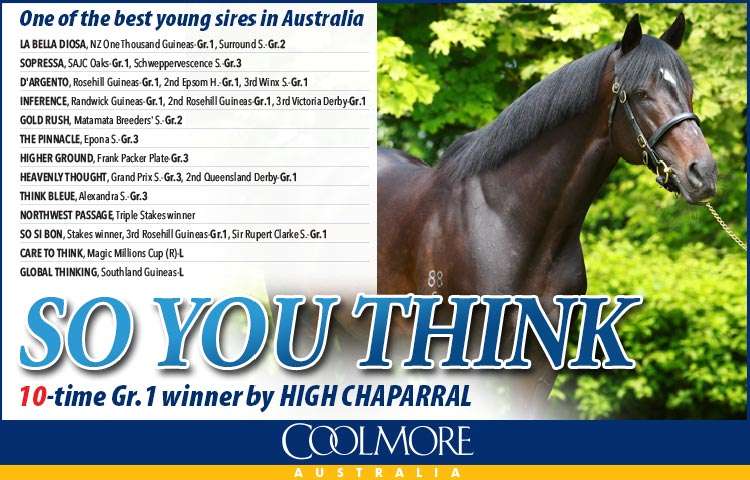 While the colt went slightly over what Aquis and Phoenix had wanted to pay, McGrath said it was worth going the additional bid to secure him.

"They are hard to value those horses. It was around about what we thought, and you go in with an open mind, give or take a bid or two," McGrath said. "We were getting to the pointy end. If you are there for $1.5m, you aren’t going to lose him for a bid are you?"

Prior to Wednesday, the highest price paid for a yearling out of the mare was the $165,000 shelled out for Stratum Star at this sale six years ago.

It is the highest-price paid for a Redoute's Choice yearling since the 2017 Easter Sale, where two lots went for $2.5m and $1.8m respectively

Coincidentally, the $1.6m was the exact same price the Aquis and Phoenix combination paid for a Snitzel colt out of Admirelle (General Nediym) at this sale 12 months ago. That colt is called Grand Admiral.

But McGrath said a decision on who will train the Redoute's Choice colt won’t be made until after he goes through Aquis' preparations at their farm at Canungra.

The partnership with Aquis to secure Lot 34 is another example of Phoenix joining forces with like-minded partners to secure the horses they need to build the business, according to Abdulaziz.

"We've got partners all over the world, some in the UK, some in America, South America and other places and here as well," he said.

"Our focus right now is Australia, getting horses so we can perform like we have in Europe and America." - Amer Abdulaziz

"The operation gets bigger and bigger and it's almost 320 horses at the moment. We are still in a phase where we are expanding and we are hoping to achieve the same track record as we achieved last year in different countries. Our focus right now is Australia, getting horses so we can perform like we have in Europe and America," he said.

At the moment, Phoenix's racing operation in Australia is relatively small scale, but the intention is there to expand significantly in the coming years.

That includes this week on the Gold Coast, where Abdulaziz expects to pick up further purchases, either in partnership or on its own.

The international influence in the Australian market has never been so strong. On Day 1, Yulong, backed by Chinese businessman Zhang Yuesheng, paid $1m for a filly by I Am Invincible, Asian Bloodstock Services paid the same for a Medaglia d'Oro (USA) colt, while American-backed Spendthrift went to $900,000 for a colt by Zoustar.

Abdulaziz says this international investment is only set to intensify given the quality on offer in Australia.

"There's no doubt about that trend increasing. We've seen the best horses in Australia go over to Europe and win, especially at Royal Ascot, that has given a great indication to buyers all over the world about the quality of Australian horses, which is on the highest level," he said.

"We've seen the best horses in Australia go over to Europe and win, especially at Royal Ascot." - Amer Abdulaziz

He also praised the sales experience, which offered much more for international buyers than just an opportunity to purchase horses.

"The set-up and everything is amazing. The Magic Millions people have been great for us and we appreciate everything they have done. To be able to attract all these foreign buyers, they are doing a great job," he said.

Bigger and better for rising Phoenix

Even with greater competition in the market, it is a case of bigger and better things for Phoenix, which is now fully registered in Luxembourg as an investment fund.

"We are fully regulated and fully registered. We've got a lot of investors involved with us and a lot on the waiting list, which is great for us, We have gone from a small player to an international player. We are building our brand at the moment, so it has been wonderful so far," he said.

Phoenix's investment in the Australian industry is far greater than just buying yearlings. It has a substantial share in Aquis stallion Invader and purchased a lifetime right to I Am Invincible at last year's Chairman's Sale. It is also investing in broodmares and Abdulaziz will return to the Gold Coast for the National Broodmare Sale in May.

The impact of Phoenix globally is already apparent through Signora Cabello's {Ire} (Camacho {GB}) win in the G2 Queen Mary S. at Royal Ascot and Gronkowski, by Australia's own Lonhro, second placing in the Belmont S. behind Triple Crown winner Justify.

The success of the investment model is destined to inspire imitators, but rather than worry about other companies attempting to copy his model, it is something Abdulaziz would be glad to see.

"It’s not easy and it's taken some time, but I’d love to see other people come in and follow what we’ve done." - Amer Abdulaziz

"I hope they do. If they need our expertise, I’d be glad to help them. It’s not easy and it's taken some time, but I’d love to see other people come in and follow what we’ve done, using a registered fund as opposed to these smaller syndicates," he said.

Marie Yoshida of Asian Bloodstock Services executed the first $1m purchase of the 2019 Magic Millions Sale, with Lot 10 'taking her breath away' at first inspection.

The colt by Medaglia d'Oro {USA) out of Group 1 winner Peggy Jean (Myboycharlie {USA}) sold for an even $1 million, an early highlight on the opening day of the sale.

"I arrived here on Sunday morning and as soon as I started inspecting, he had so much presence. He's a very excellent mover. Medaglia D'Oro is a proven sire," she said.

"He had so much presence. He's a very excellent mover." - Marie Yoshida

"Congratulations to Magic Millions. To bring these type of horses here. This horse came here and we were just very impressed by his body type, his walk, his pedigree. Congrats to Widden Stud, they did a very good job to prepare him."

Liang and Yoshida were spotted earlier in the week inspecting horses with Peter and Paul Snowden, and this colt will be trained at Randwick by the father and son partnership.

"You just feel it. Many people will tell you in 30 seconds, you need to stop and breathe and really look at this one," she said.

"We are very lucky to have top trainers in Peter and Paul Snowden. They don’t know about him yet, but I think they will be very happy that they have got this colt."

The Snowdens have trained several horses in Australia for Liang previously and have the two Fastnet Rock 2-year-old colts Yoshida bought for Liang at last year's Magic Millions Sale, California August, who sold for $500,000, and California Boxer, who sold for $650,000.

The half-sister to this colt by I Am Invincible sold for $750,000 at last year's Easter Sale to Emirates Park. She is called Enjaaz and is currently in training with Team Hawkes at Randwick.

This colt is the last foal from Peggy Jean, who died in 2017. Peggy Jean won two of her 14 starts for Gerald Ryan, but both wins were in valuable races in the $250,000 Inglis Classic and the G1 Sires Produce S.

Widden also sold the highly-anticipated pinhook colt by Zoustar out of Shakeira (USA) (Freud {USA}) for $900,000 to Spendthrift Australia.

Shakeira was a Listed winner in America and Redwall Bloodstock paid $310,000 for the colt as a weanling, returning a tidy profit on their investment when he sold as Lot 117 on the first day of the 2019 sales season.

Spendthrift Australia's General Manager Gary Cuddy was delighted with his purchase and congratulated Redwall on their canny investment.

"We had him as the best Zoustar colt here so when they are as good as Zoustar, you have to dig deep in your pockets and hope that you end up with the horse that you want and that's what we’ve done," he said.

"When you are here, you have to buy the best and you have to spend the money." - Gary Cuddy

"When you are here, you have to buy the best and you have to spend the money. And plenty of good judges were on him as well. Congratulations to the people that purchased him as a weanling, they’ve turned a good profit on him, but we are happy to have him."

In its four years of operation in Australia, Spendthrift has made no secret of its desire to develop its own stallions and this colt, although just a yearling, certainly fits the bill.

"We'd love be able to take him to America and stand him on the reverse shuttle. Being out of a good running American mare, it’s one box ticked, so we’ll get to the racetrack and tick that box as well," he said.

Cuddy said a trainer for the colt hadn't been determined yet, but given most of Spendthrift's Australia racing stock are prepared by Team Hawkes, it was a strong possibility he would end up there.

Widden had 10 lots in total go through the ring on Day 1, with nine sold and two passed in. They had the top two lots by Zoustar with Lot 191 going to Jon Kelly, Reg Inglis and Tom Magnier for $625,000. The half brother to Zoustar's star filly Sunlight by Sebring, Lot 152, was a late withdrawal from the sale.

Next article
Records fall on Day 1