Potent family the toast of Haunui

The stakes dream is continuing for a celebrity family that has made its mark on both sides of the Tasman for Haunui Farm.

Valpolicella (NZ) (Red Ransom {USA}) is doing a tremendous job in her broodmare role with five winners from six to the races and a trio of her brood are Group winners.

The latest to add to the impressive roll of honour is the quality mare Celebrity Dream (NZ) (Thorn Park), who at Ascot on Saturday was successful in the G3 Mrs Mac’s LA Trice Classic for owner Bob Peters and trainer Adam Durrant. Her 10 wins from 22 appearances also includes four victories at Listed level.

“Valpolicella is a direct descendant of Foxona, our foundation mare who was purchased from Trelawney Stud in 1953.” - Mark Chitty.

“Valpolicella is a direct descendant of Foxona, our foundation mare who was purchased from Trelawney Stud in 1953,” Haunui Managing Director Mark Chitty said. 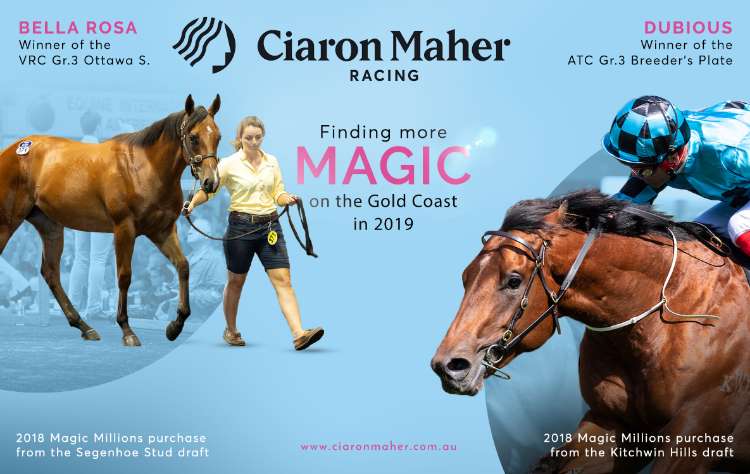 Raced by Haunui with Garry Cranny and Cathy Franich who continue to breed from her, Valpolicella won the G3 Manawatu Classic and the Listed Champagne S. during her racing days, but it is as a producer that she has really excelled.

Her first foal was Catalonia (Commands), who was purchased by Te Akau boss David Ellis at Karaka in 2012 for NZ$150,000. He won the Listed Wentwood Grange S. at Te Rapa as a 2-year-old for then Te Akau head trainer Jason Bridgman before joining Chris Waller’s operation.

Racing as Vilanova, he added the G2 Autumn Classic, the G3 Grand Prix S. and the Listed Tattersalls Club Cup to his record and placed in the G1 Queensland Derby.

Valpolicella’s next foal was Vavasour (NZ) (Redoute’s Choice) and she was bought by Sarah Green and Ger Beemsterboer under their Barneswood Farm banner out of Haunui’s 2013 Karaka draft for $NZ425,000.

Trained by Peter and Dawn Williams, she added the G2 Sir Tristram Fillies’ Classic, the G3 Counties Cup and the G3 Waikato Cup to the family honours board.

Celebrity Dream was to follow and she was secured by bloodstock agent John Chalmers in 2014 on behalf of Peters for NZ$260,000.

The next two foals are now racing in Haunui’s colours with Rondinella (NZ) (Ocean Park {NZ}) a dual winner and fourth in the G2 Sir Tristram from a handful of starts for trainer Roger James. Sahar (NZ) (Iffraaj {GB}) is also lightly-tried and has won for Murray Baker and Andrew Forsman.

Watch: Vinorules as a yearling

“We’ve also got a 2-year-old Savabeel filly with Peter and Dawn Williams,” Chitty said. “She hasn’t got a name yet, but it will be something to do with wine. Since On The Rise (Valpolicella’s third dam) all the fillies have had a wine connotation.

“Valpolicella’s had an Iffraaj colt and she is in foal to Not A Single Doubt.” - Mark Chitty.

“Valpolicella’s had an Iffraaj colt and she is in foal to Not A Single Doubt. She’s a pretty special mare and it’s amazing that she’s doing it with colts and fillies, it’s exciting.”

Valpolicella is a daughter of Our Reisling (Last Tycoon {IRE}), who won on four occasions, and she is out of Dopff (NZ) (Tights {USA}).