10 min read
The rivalry between Arrowfield's champion stallion Snitzel and his heir apparent, Yarraman Park's I Am Invincible, is set to intensify on the Gold Coast.

Snitzel and I Am Invincible take their rivalry at the top of Australia's stallion rankings back to the sales ring in the upcoming Magic Millions Gold Coast Yearling Sale.

The pair dominated the 2018 yearling sales season, with Snitzel leading the sales average with 87 lots sold at just over $470,000, while I Am Invincible's 97 lots sold for a grand total of $42.62m, putting him on top of the rankings on aggregate.

Last year at Magic Millions, they had the top six lots between them with I Am Invincible siring the two highest-priced yearlings. 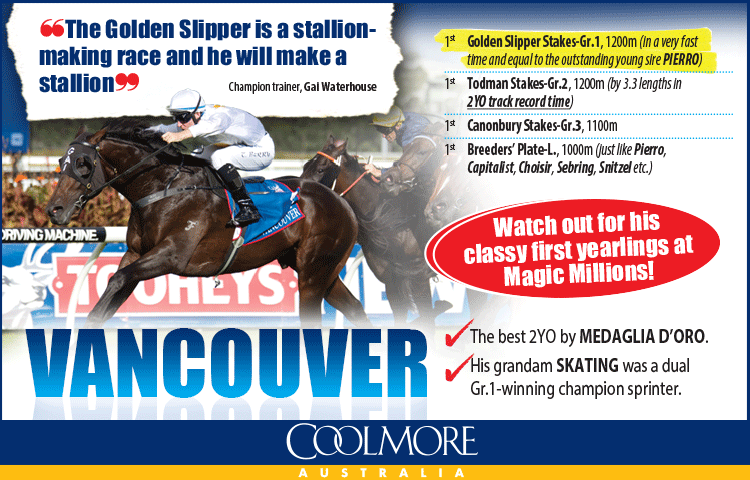 Their rivalry is strong on the track as well. Last season, Snitzel made it back-to-back sires titles, with his progeny earning a record $29.2m, while his 26 stakes winners equalled the previous mark.

But I Am Invincible, who finished second on the sires table last season, has had an incredible start to the 2018-19 season, already matching the amount of stakes winners (19) he had for the entirety of 2017-18 in the first five months of this season.

He leads the sires' table in every aspect except the one that counts for title honours, with Redzel's heroics in The Everest helping Snitzel to a lead of just under $5 million when it comes to prizemoney earned. 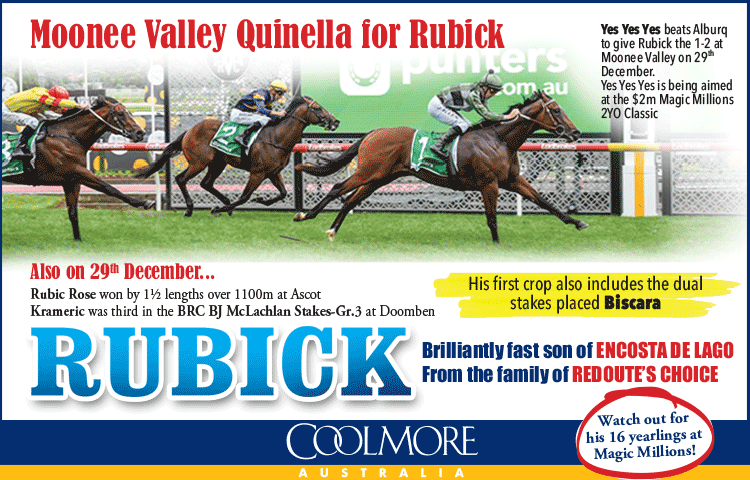 I Am Invincible leads all sires in terms of representation in the 2019 Magic Millions Sale, with 61 lots catalogued, 17 more than last year and 15 more than Snitzel this year. Yarraman Park offers 16 of them and director Arthur Mitchell is confident that the market interest will remain strong.

View Lots by I Am Invincible

"They should receive them certainly as well as last year. He's only just kept getting better. At this stage, he has had 19 stakewinners already, so I'd thought the market should take to them pretty well. To have had group winners this year alone at 2, 3, 4, 5, 6 and 7 years old, is pretty amazing," Mitchell told TDN AusNZ.

"I would have thought because the huge majority of them are such good types, they should sell pretty well. I don’t think he's got any weak spots. I'd assume they'd have to be pretty popular in the sales ring."

Magic Millions Managing Director Barry Bowditch is also expecting big things of the crop of I Am Invincibles which will be presented on the Gold Coast this month.

"I think last year's yearling sales series showed what the market thinks of I Am Invincible now. He was huge in the marketplace up here, he had a $2 million yearling and a $1.8m horse," he said.

Among Yarraman Park's draft is a full brother to last year's sale-topping colt out of Tai Tai Tess (Magic Albert) who went for $2 million. Mitchell said the continuing positive reports on that colt, now called Faretti and with Gai Waterhouse and Adrian Bott, can only be a positive for his sibling, listed as Lot 204.

"He's pretty similar. He's a nice colt and there are very good reports on the full brother. I'm not sure he’ll race this time in or he's going to have a break, but I know the stable has a big opinion of him, He's a really nice colt," he said.

"He's pretty similar. He's a nice colt and there are very good reports on the full brother." - Arthur Mitchell

"She's had two stakes winners (Charmed Harmony and Suyoof). She's got a good pedigree and the cross works well with Danehill Dancer," he said.

Gallery: Two I Am Invincible colts Arthur Mitchell is looking forward to offering at Magic Millions

Mitchell described the 16 lots by their star stallion as ' a good assortment for everybody'.

With the weight of numbers on his side, and with 21 of the 61 on offer from stakes-winning mares, there is certainly a sense of I Am Invincible closing the gap on Snitzel.

Mitchell described the rivalry between Yarraman Park and Arrowfield over their two star stallions as an amicable one.

"Mainly in a friendly manner. Snitzel was bred here, so we’ve always had a fair bit of time for Snitzel. We love Snitzel. If there was any rivalry it would only be friendly. That's all but it’s quite fun to watch how they compete," Mitchell said.

"We love Snitzel. If there was any rivalry it would only be friendly." - Arthur Mitchell

Arrowfield chairman John Messara doesn't concern himself too much with how other studs' stallions are performing.

"We just do our best and people are entitled to have turns," he said.

"You can’t stay at the top all the time on everything. The horses dictate it. A new horse comes along, and does brilliantly well, and is entitled to get to accolades. Tomorrow it might be us and the next day it might be someone else and good luck to them."

The average price for a Snitzel yearling jumped an amazing 24 per cent last season and Messara is hopeful those strong results can continue.

"I'm hopeful, let’s put it that way. But at the end of the day, buyers and sellers will determine all that." - John Messara

"I'm hopeful that he is going to sell well. I don’t want to be specific about prices because it’s a really competitive market. There are a lot of new stallions and there's a set amount of money to go around but I think they’ll sell well," he said.

"He's coming in for his third stallion championship in a row, if he pulls it off this year, and he's five million ahead. I'm hopeful, let’s put it that way. But at the end of the day, buyers and sellers will determine all that."

And while I Am Invincible continues to close the gap on the track and in the sales ring, Messara has complete faith in his stallion moving forward.

"He's having a quieter year this year on the racetrack in terms of stakes winners than last year when he equalled the record but they come in waves, we know that with stallions," he said.

"Snitzel is the horse that for many a year has been the consistent performer at the high level. He gets Slipper winners and he gets Group 1 performers." - Barry Bowditch

"And he's got a tremendous amount of work in progress, in terms of mares in foal and foals at foot. He's got some wonderful broodmares that have gone to him the last year or two in good numbers."

"If you buy this year, you can expect that the racetrack performance is going to continue to be good."

Bowditch agrees that Snitzel's excellent track record will ensure that there is significant support for his 46 lots catalogued on the Gold Coast.

"Snitzel is the horse that for many a year has been the consistent performer at the high level. He gets Slipper winners and he gets Group 1 performers. Obviously, he's a Magic Millions graduate. We've been having great success selling his stock. We’ve had plenty of sale toppers by him. He's always the horse that has 40 or 50 horses in our sale every year," he said.

Arrowfield offers a full sister to Snitzel's G1 Golden Slipper S. winner of last season Estijaab, one of five it has catalogued from the stallion.

"She's different to Estijaab, but never-the-less a nice filly," he said of Lot 63, who is out of Group 1 winning mare Response (Charge Forward).

"And of course she's worth a fortune as a residual asset, because she would be wonderful for breeding whatever she does. If she's a stakes winner, all the better."

The first session on Wednesday also sees Arrowfield offer a Snitzel colt out of another Group 1 winning mare in Politeness (Street Sense {USA}), Lot 20, a yearling Messara says is 'much admired'.

Gallery: Well-bred Snitzel fillies to be offered by Arrowfield Stud

The inevitable buzz about the battle between these two star stallions for honours in the year's first sale only benefits vendors with Bowditch saying the fact the two make up over 100 of the total catalogue tells you all you need to know about their influence.

"They are two of the horses we have huge numbers by. When we select the catalogue, we focus on these type of horses. They are horses that hit the board a lot," he said.

"When we select the catalogue, we focus on these type of horses. They are horses that hit the board a lot." - Barry Bowditch

"They both get you genuine racehorses, year in, year out. They do a lot that we require them to do for marketplace perspective. Obviously having huge numbers of them, bodes well for the sale."

As for the overall strength of the market in 2019, both Messara and Mitchell agree that the recent prizemoney boosts in New South Wales and Victoria will add some extra confidence.

"If you look between New South Wales and Victoria, there will be about $500m distributed in prizemoney in 2019. The magnitude of that, it’s amazing, when you compare it with five or ten years ago, it’s incredible," Messara said.

"If you look between New South Wales and Victoria, there will be about $500m distributed in prizemoney in 2019." - John Messara

"I think it's going to be a big lure for people. You can race horses for profit now. It’s something you couldn’t have said for a long time."

Mitchell also expects a strong overseas interest in the sale to be a factor, with a more favourable exchange rate.

"I'd like to hope the market can be as strong as it was last year. Prizemoney levels have gone up in NSW and Victoria, with all these big races that are being put on, you’d hope there would be some strength there," Mitchell said.

"Also our dollar is at the lowest it has been against the US for ten years or so, so that will give the overseas buyers a bit more value for money."

Next article
The rise and rise of Magic Millions