Godolphin will have its first-ever representative in the $2 million Magic Millions 2YO Classic next Saturday after Exhilarates (Snitzel) impressed with a win in the Follow @AquisFarm on Facebook QTIS Two-Years-Old Hcp at the Gold Coast.

Given a perfect ride by Kerrin McEvoy, Exhilarates, having her fourth start, had plenty in reserve in beating Lubuk (I Am Invincible) by 1.75l, with The Odyssey (Better Than Ready) third.

A $600,000 buy at last year's Gold Coast sale out of G1 Blue Diamond S. winner Samaready (More Than Ready {USA}), Exhilarates has now qualified for next week's feature having won the same race that the last two winners of the Classic, Sunlight (Zoustar) and Houtzen (I Am Invincible).

"That's like the perfect gallop for her, seven days out from the Grand Final," James Cummings said post-race.

"That's the best run she's had in a race, Kerrin did a beautiful job from a nice barrier. We made a little bit of a gear change, we are just trying different things with her and she's shown some nice ability there."

"That's like the perfect gallop for her, seven days out from the Grand Final." - James Cummings 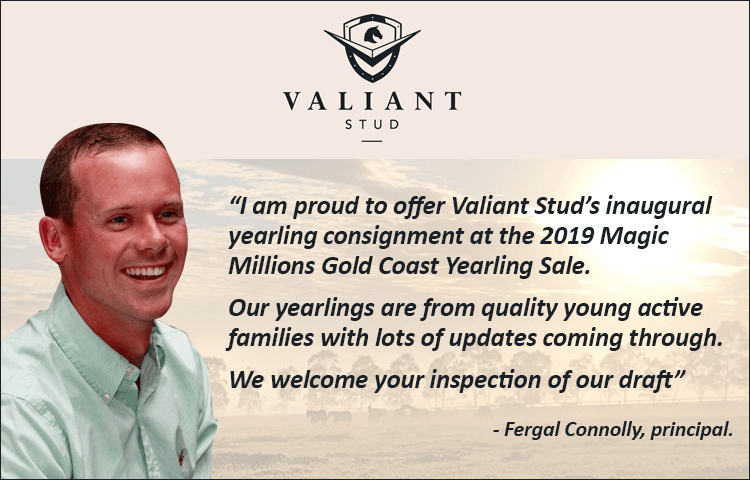 While Exhilarates was a disappointing fifth when well-backed on debut at Rosehill in November, and was then beaten in a Gosford maiden, she showed considerable improvement when beaten just 1.3l by Magic Millions 2YO Classic favourite Unite And Conquer (Hinchinbrook) at Wyong last time out.

She took further improvement into Saturday and Cummings is confident she is ready to go headed into next week.

"She been an improver and that's the best thing about Exhilarates, Early on, she wasn't showing us she was another Samaready, and maybe she still isn't but it’s an open race next weekend and she is going to arrive like a fit horse on the scene, with good seasoning," he said.

"The way she was poised before the turn and then let down sharply, looked like the sort of performance that you are going to need from a 2-year-old in seven days."

Cummings said the significance of Godolphin having its first runner in one of the leading 2-year-old races on the calendar couldn't be underestimated.

McEvoy back for more history

McEvoy, who has had a long association with Godolphin, including riding its first-ever Melbourne Cup winner two months ago in Cross Counter (Teofilo {Ire}), also appreciated the piece of history he was a part of.

"James has tailored the program to get her into the race spot on for next week and she’ll get into the race with that extra prizemoney and I'm looking forward to carrying that Godolphin blue in the Magic Millions," he said.

"It’s great to see them part of the Magic Millions sale now and have a runner in the race and it’s good to be part of it with them."

Hightail to the Gold Coast

Joining Exhilarates in the 2YO Classic will be impressive Kensington winner Hightail (Written Tycoon).

Hightail proved too strong over 1150m of the Events by ATC Hcp, winning by 2.3l and booking his Gold Coast ticket.

“That was pretty much his gallop for next week,” winning co-trainer Paul Snowden said.

“We haven’t done a whole lot with him this week and I dare say we won’t have to do much with him next week either."

“He handles the heat extremely well and is very laid back which is a massive plus on days like today.”

He is out of La Paris (Falvelon), a half-sister to Ringa Ringa Rosie (Bradbury's Luck). That's the family of Group 1 winner Dashing Eagle (Danehill) as well as G2 winner La Caissiere (Luskin Star).