Will the Melody continue to play?

The 4-year-old mare, winner of the G1 Tarzino Trophy and G1 Windsor Park Plate during her last campaign, must carry top weight of 57kg, and overcome the second widest barrier in a race where there is expected to be plenty of speed. 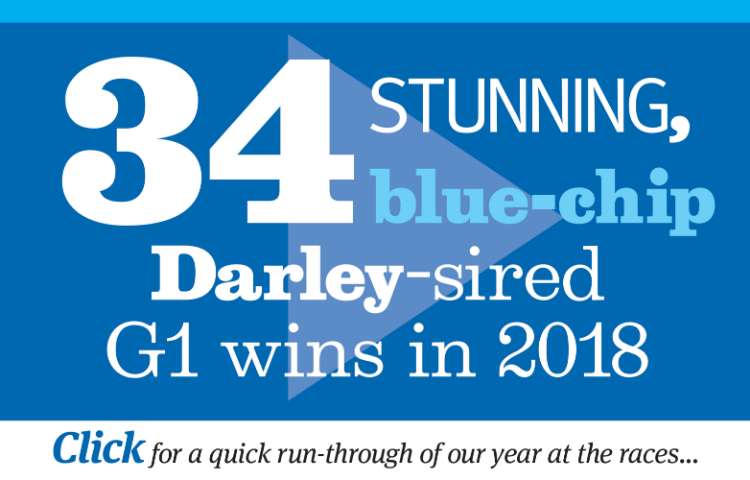 Trainer Jamie Richards admits the wide barrier is his biggest worry for his star mare as the three-time Group 1 winner must overcome barrier 15 to win the first feature race of 2019.

“She is fit and forward and ready to go. We couldn’t be any happier with her,” he said. “She’s had a couple of trials and won those nicely. She had a nice exhibition gallop at Te Rapa and she worked well here on Thursday morning on the course proper (at Matamata)."

“She’s where she needs to be and is in terrific order, but we have just got to work a way around that barrier (15), which is a little disappointing. "

“She’s probably going to be back a little bit in the field, hopefully with a bit of cover. If she can get the right run into the race she is going to be very competitive.”

Melody Belle has been the long-time favourite for the traditional New Year's Day feature, but her hold on that title has been loosened somewhat with her main rival, Bostonian (NZ) (Jimmy Choux {NZ}) coming up with barrier five.

Bostonian, a winner of the G3 Sunshine Coast Guineas in June, also has the added advantage of having had a lead-in run, showing his class with an easy win in the Listed Haunui Farm Counties Bowl back in late November.

In contrast, Melody Belle has registered two easy trial wins, as she looks to improve off her performance last year when sixth in this race carrying 4.5kg less.

Volpe Veloce (Foxwedge), the winner of this race 12 months ago, was last seen when second in the G2 Auckland Thoroughbred Breeders' S. but has drawn the outside alley and will need some luck and a great ride from Michael Coleman to make it back-to-back wins.

A very even Auckland Guineas

There are three Group 2 races to be contested, the highlight of which is the Jamieson Park Auckland Guineas, which looks a very even race.

Team Rogerson's More Wonder (NZ) (Mossman) comes into this off back-to-back wins in Premier races at Riccarton and Awapuni and holds a clear top rating,

Surely Sacred (NZ) (Rock 'n' Pop) comes in as the least experienced runner with just two starts but his second in the G2 Bonecrusher S. last time out has him as a leading contender here, while Penteverest (NZ)(Pentire {GB}) is looking for a hat-trick of victories after recent wins at Avondale and Ellerslie.

The G2 Valachi Downs Royal S. sees Pinmedown (NZ) (Pins) as the top pick based on her win in the Cambridge Stud Eight Carat Classic on Boxing Day. There was just a long neck between her and one of her key rivals here, House of Cartier (Alamosa {NZ}), on that occasion.

Queen of Diamonds (NZ) (Savabeel) was third that day, and while she doesn’t front here, the horse who finished second behind her at her previous start in the G3 Eulogy S, Elate (NZ) (Savabeel), is engaged and is expected to appreciate the step up to the 2000m.

The G2 Rich Hill Mile is also expected to be a very open race, with Love Affair (NZ) (Savabeel) a winner over this course and distance in the G3 Eagle Technology S. two starts back.

She was subsequently beaten by Belle Du Nord (Reliable Man {GB}) in the G2 Cal Isuzu S. and that mare is again considered one of her main rivals along with Magnum (NZ) (Per Incanto {USA}) who was second in the G3 J Swap Contractors Sprint on the same day at Te Rapa.

A wide barrier and big weight are a slight concern for co-trainer Andrew Forsman, but he couldn’t be happier with her preparation.

She has to overcome barrier 13 on Tuesday, but Forsman, who trains the 5-year-old mare in partnership with Murray Baker, is confident that jockey Opie Bosson can give her the right run.

“I’m very happy with her,” said Forsman. “Her last two gallops have been spot-on. I think she is perfect going into the race.”

“She’s carrying 57kg and is going to be giving some pretty classy horses a decent swing in the weights, which is not ideal.

“We’ll just have to deal with the cards that we have drawn. From a bad barrier she will probably have to go back a little bit, but that’s going to be more for Opie (Bosson, jockey) to figure out."

“I’m very happy with the horse and if she gets any sort of luck in the run she is going to be competitive.”

The G3 Barnswood Farm Eclipse S. features three unbeaten 2-year-olds with Whiskey Neat (Denman), a 10.25l winner on debut at Otaki, the one to beat.

The New Year's Day meeting at Flemington features the two traditional features, the sprint, the G3 Standish Hcp, and the staying contest, the Listed Bagot Hcp.

Darren Weir holds the aces in the Standish with Whispering Brook (Hinchinbrook) a narrow winner at this track last start, favourite ahead of stablemates Theanswermyfriend (High Chaparral {Ire}) and First Among Equals (Exceed and Excel).

The best hopes of a non-Weir winner rest with the Peter Gelagotis trained-pair Illustrious Lad (I Am Invincible) and Call Me Handsome (Ire) (Kodiac {GB}).

In the Bagot, Etymology (New Approach {Ire}) is highly fancied to repeat his success at this track on December 22, when a 4.75l winner, with Listed Pakenham Cup winner Our Big Mike (NZ) (Don Eduardo {NZ}) his main rival.

Next article
Seymour's long road to the Millions