4 min read
Sun City (Zoustar) proved himself to be the brightest young spark at Doomben where he earned the golden ticket into a $2 million feature in two weeks’ time.

The good-looking colt was dominant in the G3 Magic Millions BJ McLachlan Plate on Saturday and a race he had to win or finish second to earn his spot in The Star Magic Millions 2YO Classic at the Gold Coast.

Sun City never gave his connections any cause for concern and it’s now onward and upward to the big prize and rider James McDonald, who was having his first ride on him, was suitably impressed.

“He’s a sharp colt and he wasn’t brilliantly away, but he mustered speed quickly.” – James McDonald. 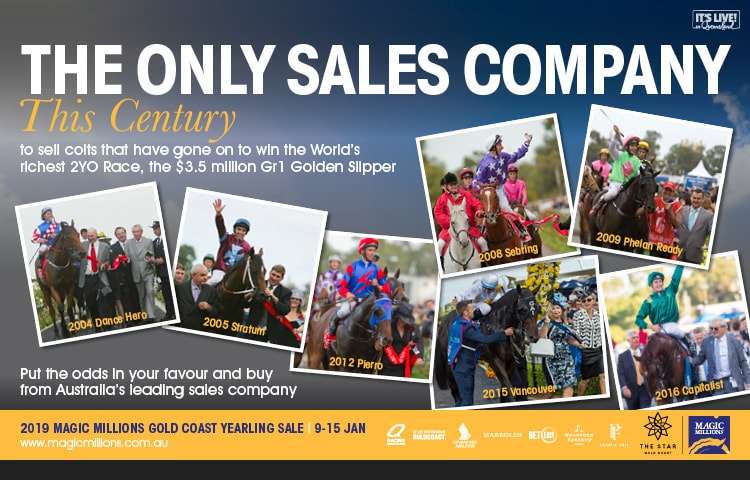 “They have done a great job with him, teaching him to relax and all I had to do was to peel off their backs.”

Sun City coasted along in third spot on the rail and McDonald was able to angle him into the clear before the top of the straight and once he got to the front 300 metres from home the race was over.

Second on debut in the Listed Maribyrnong Trial S., the Tony McEvoy-trained youngster also finished runner-up in the Listed Phelan Ready S. in his only other appearance and McDonald said those outings were crucial.

“Race day experience is the key to everything and we see it time and again across all states.” – James McDonald.

He said time and again quality opposition with starts under their belts regularly had the measure of inexperienced contenders.

McEvoy was understandably confident of a bold showing from Sun City.

“He had really come on from the two runs,” he said. “He improved and his coat was really out.”

While McEvoy got the result so desired by the colt’s connections, the experience factor counted against his other runner Just Zerene (Zoustar).

She was on debut and had to win to gain entry into the Magic Millions Classic, but she blew her chances at the start with a slow getaway and after racing wide she finished a non-threatening sixth.

McEvoy said before the race that he was happy with the filly’s condition, but it was all about her manners and she couldn’t afford to make a mistake. Unfortunately, she did.

The Peter and Paul Snowden-trained Rome (Pierro), a $1,050,000 Gold Coast purchase, ran home well to finish second, he will be borderline to make the Magic Millions Classic line-up and ditto Krameric (Rubick), who ran third.

Meanwhile, James Orman made the most of a pick-up ride on Fiery Heights (Hidden Dragon) to lead all the way for a slender win in the Listed Magic Millions Falvelon Quality.

Trainer Barry Lockwood was without a rider for the resuming sprinter and Orman got the call up.

“At one stage I really thought I would ride him myself.” - Barry Lockwood.

“At one stage I really thought I would ride him myself. I still reckon he would have won,” Lockwood said.

However, he got Orman to ride Fiery Heights and stewards allowed him to be a half a kilo over the allotted weight.

“He was in the steam trying to get the last bit off, but I told him the ride would be worth it,” Lockwood said.

“I would have been dirty if we had got beaten riding a half (a kilo) over.” - James Orman.

“I would have been dirty if we had got beaten riding a half (a kilo) over,” Orman said. “He jumped to the front and he goes well first-up.”

Fiery Heights sped to the lead and, after dashing clear 200 metres from home, he clung on for a narrow victory over the fast-finishing veteran Irish Constabulary (Flying Spur).

The 6-year-old has now won nine of his 33 starts and three out of half a dozen starts for Lockwood since transferring from Toby Edmonds’ operation.

Next article
Alizee back on track with a regal performance