5 min read
The first crop of Darley stallions Exosphere and Kermadec (NZ) will hit their first yearling sale on the Gold Coast next month and Managing Director Vin Cox is expecting them to make a considerable impact.

Exosphere has 24 of his progeny catalogued at the Magic Millions Sale, while Kermadec has 12 in the first major test of how the market will receive the two young stallions.

For the second straight year, Godolphin will be active as a buyer in the sales, and Cox, who is overseeing his first full sales season since taking charge, has been busy assessing the Magic Millions catalogue, embarking on a four-day tour of the Hunter Valley earlier this month.

Included among the yearlings inspected were progeny of the first crops of two Darley sires.

"It was a fantastic week for us and a great opportunity for us to get out and look at the progeny of the new season sires of which we’ve got particular interest in, Exosphere and Kermadec," Cox told TDN AusNZ.

"The Exospheres are big, strong, impressive horses and the Kermadecs are very good moving and good-looking horses. We are quite excited and happy with what we’ve seen." 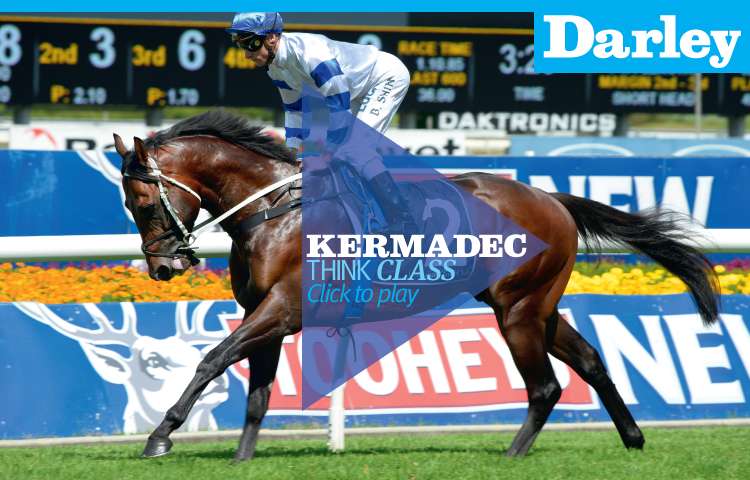 Exosphere's record-breaking racetrack heroics, which included a brilliant victory in the G1 Golden Rose S. always meant he would be a much-anticipated stallion prospect and he stood for $27,500 in his first season.

Cox said Exosphere's yearlings were very much in his mould and he is expecting a strong response from buyers on the Gold Coast.

"They are very imposing, plenty of front, plenty of structure." - Vin Cox

"They are very imposing, plenty of front, plenty of structure. They are good sized looking horses and you would expect them to be fast horses," he said.

"The one thing you like to see when you are looking at new stock is having a line on them. They are not all over the place. And that's the one thing that comes through, they are consistently a similar type."

It’s a marquee vintage of stallions having their first crops at the sales this year, including the two dominant 2-year-olds of his year, Vancouver and Pride of Dubai.

But Exosphere was clearly the best spring 3-year-old of that generation, with a hat-trick of wins in the G2 Run To The Rose, the G1 Golden Rose S. and the G2 Roman Consul S.

"He himself wasn't the earliest 2-year old. Like him they are bigger horses, so they'll take that slight little bit longer to come to hand," he said.

Exosphere's best on the page

In terms of pedigree, some of the highlights by Exosphere include Lot 122 from Kenmore Lodge, who is a filly out of Listed winner She Goes To Rio (NZ) (Captain Rio {GB}).

Edinglassie Stud is offering Lot 346, a half-brother to Group 2 winning mare Mamwaazel (Exceed and Excel) from Amazoom (Last Tycoon {Ire}), a half-sister to another Group 2 winner in Always Devine.

Another half-sibling to a stakes-winner is Lot 448, a filly being offered by Tyreel Stud out of Champalou (Encosta De Lago), who has already produced Listed winner Champ Elect (Choisir). Champalou is out of G1 Queensland Oaks winner Vouvray (NZ) (Zabeel {NZ}).

Kermadec, who won a Doncaster H. and a George Main S. as racehorse, has half the representation of Exosphere at the Gold Coast, but based on Cox's assessment, will make his presence felt.

"I think the market will get a very pleasant surprise, they are very impressive." - Vin Cox

"I think the market will get a very pleasant surprise. They are very impressive, they are particularly good looking horses. I think you'll find the the market will warm to them very much," he said.

The first Kermadec on offer is Lot 13, a colt offered by Kulani Park out of New Zealand Group 2 winner Pimms Time (Pins). That is the family of G1 Caulfield Cup winner Railings as well as Virage De Fortune and Stratum Star, which harks back to the champion mare Emancipation.

Lot 779 is another one worth highlighting on pedigree. He is a colt from Majestic Faith (Denman), who is a daughter of Faith Hill (Danehill {USA}) and a three-quarter sister to Black Minx.

With the dual responsibilities of finding a few to buy as well as keeping an eye on how the Darley stallions perform, Cox said he will have the entire catalogue covered by the time the sale starts on January 9.

"It’s a big catalogue with lots of horses so you want to make sure you are right across the majority of the catalogue," he said.

"You want to make sure you are right across the majority of the catalogue." Vin Cox

"We've spent four days in the Hunter Valley. That broke the back of it. We will get up to the Gold Coast early and see the remainder of the horses we haven’t seen and then start applying the filter and having our second and third looks from there."

"By the time the sale starts, we will have seen the ones that we are most interested in a few times and be ready for the first horse that comes into the ring," he said.

Next article
Trainer ready with his girl to chase more cash