G3 Breeders' Plate winner Dubious (Not A Single Doubt) remains firmly on track for the Magic Millions 2YO Classic at the Gold Coast next month after winning a Warwick Farm trial on Tuesday morning.

The Ciaron Maher and David Eustace-trained colt, who is among the favourites for the $2m Gold Coast feature, will make his return to the track in Brisbane next week, having narrowly won his trial.

"He did what he had to do. He's in good order and he's on track to run next Saturday week at Doomben over 1050m and then it’s three weeks into the Magic Millions, which is a race we aim to have him pretty right for," Maher told Sky Sports Radio. 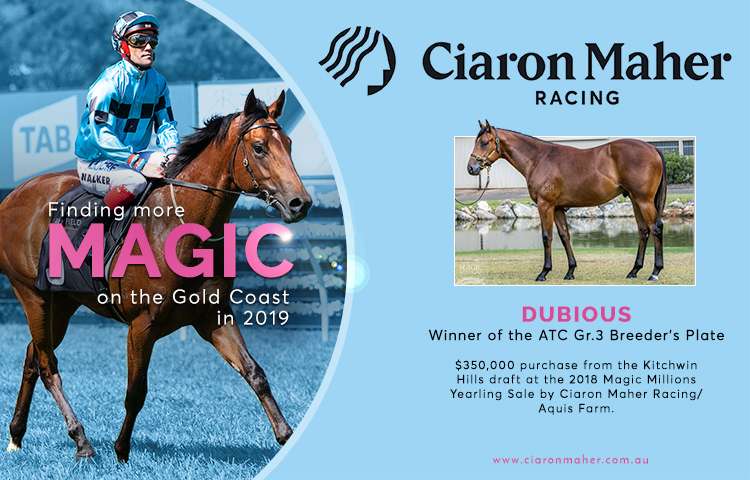 "He did what he had to do. He's in good order and he's on track to run next Saturday." - Ciaron Maher

Retained rider for owners Aquis, Michael Walker, flew to Sydney to ride Dubious, who jumped fairly before being bustled up to lead the field and hold off Shine Tak Field (Deep Field), with Splintex (Snitzel) a length back in third.

It was an improvement from Dubious' last trial at Randwick late last month where he sat just off the pace and finished fifth.

"Mick's had a couple of sits on him now and he's starting to understand him and he said he felt really nice underneath him. His recovery was good. He only does as much as you want him to," Maher said.

A $350,000 buy at last January's Magic Millions Sale, Dubious has continued to make improvement since his debut at Randwick in September, according to his co-trainer.

"He's fairly well educated. He's been to Caulfield, he's been to Randwick, Canterbury, Warwick Farm and Rosehill, and then you can add Doomben and the Gold Coast, so for an early 2-year old, he's seen quite a bit," he said.

That Doomben race on December 22 was shifted to Eagle Farm - and shortened to 1000m - later on Tuesday with Racing Queensland confirming that racing will return to the Brisbane venue.

The fastest 2-year-old trial of the morning at Warwick Farm was recorded by the Lindsay Park-trained Hafaawa (Redoute's Choice), a half-sister to Champion South African 2-year-old Soqrat (Epaulette) and from the successful 'Luna' family, who won her heat by three lengths in a time of 47.54, 0.11 of a second faster than Dubious.

The other 2YO fillies trial was won by the previously unseen Peter and Paul Snowden filly California Zimbal (I Am Invincible), a half-sister to recent stakeswinner From Within (Not A Single Doubt), who finished too strong for her rivals to win in a time of 47.97s.

Mark Newnham's Diamond Thunder (Dawn Approach {Ire}) won the other colts and geldings trial in a time of 47.86s, beating Rocketing To Win (Shooting to Win) by 0.8l.

The 4-year-old was a winner of one of his five starts for David Smaga in France.