The sales season is much-anticipated by all the big studs, but for Coolmore, 2019 looms as especially significant with the first Australian crops of three of their high-profile stallions on offer.

The catalogue for next month's Magic Millions Yearling Sale will feature 35 lots each from Vancouver and Pride of Dubai and nine from No Nay Never (USA), the boom first-season sire in Europe.

While the progeny of Golden Slipper S winner Vancouver and Blue Diamond S. winner Pride of Dubai have been much anticipated, the emergence of No Nay Never as the premier first-season sire in Europe has given Coolmore as strong a hand as they could have hoped for in the Australian first season-sire market. 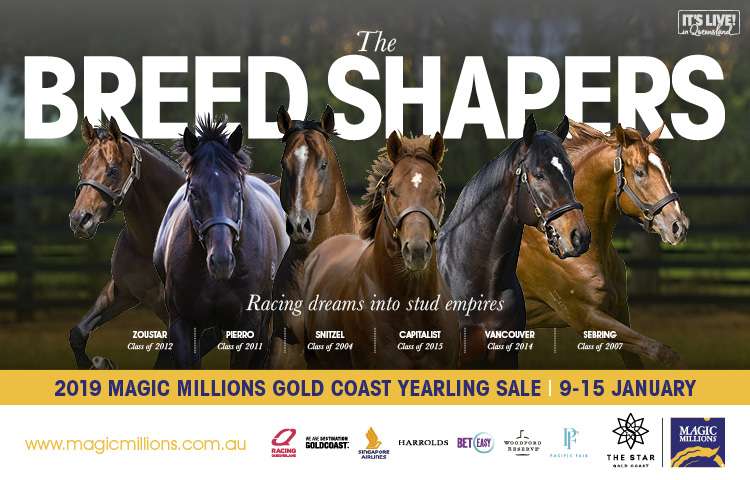 "In the case of No Nay Never, he has been a real talking horse since his first foals hit the ground in Europe. He has an incredibly powerful physique which is something that he consistently throws into his progeny," Coolmore's stud manager Jim Carey said.

"In the case of No Nay Never, he has been a real talking horse since his first foals hit the ground in Europe." - Coolmore stud manager, Jim Carey

"As a result, it was a logical move to bring him down to Australia where he has always been popular with breeders.

"He has made an incredible start to his stud career with his first two-year-olds in the Northern Hemisphere and is the sire of some of Europe’s most talented juvenile performers in 2018, including G1 Middle Park S. winner Ten Sovereigns (Ire). He is a very important sire for Coolmore and we hope he can carry on from the late, great Scat Daddy (USA)."

Included among the Coolmore draft of eight No Nay Nevers for Magic Millions is Lot 367, a colt out of Group 1 winner Aqua D'Amore (Danehill {USA}), while Lot 234 and 33 are half-sisters to stakes-winners Dreams Aplenty (Dream Ahead {USA}) and Excelorada (Exceed and Excel) respectively.

Vancouver, the champion 2-year-old of his year, and sold through Coolmore at this sale for $185,000 five years ago, is looking to continue the tremendous success of Golden Slipper winners at stud.

"Vancouver is one of only four colts in history to go through his Golden Slipper winning 2-year-old campaign unbeaten," Carey said.

"Golden Slipper winners have an unparalleled level of success at stud in Australia with 20 going on to sire G1 winners." - Jim Carey

"Golden Slipper winners have an unparalleled level of success at stud in Australia with 20 going on to sire G1 winners and Vancouver won it in very quick time despite being drawn barrier sixteen."

"We are very excited by his progeny as they have inherited his immense quality and athleticism. They are sure to be hugely popular at the very sale he himself was offered through the Coolmore draft."

Nine of the 35 Vancouvers in the Magic Millions are offered by Coolmore, with three of them out of stakes winners and one, Lot 31, a half-brother to G2 winner Believe Yourself (Sebring).

"He covered an outstanding book of mares in his first season and we have been rewarded with a wonderful offering of yearlings in his first crop," Carey said.

Lot 694 and 628 are fillies out of multiple stakes winners Jazz Song (Fastnet Rock) and Graceful Anna (Canny Lad) respectively, while Lot 431 is out of Listed winner Born To Rock (Fastnet Rock).

Bidders on the Gold Coast won’t have to wait long to get their first look at a Vancouver with the filly out of Paris Who (Fusaichi Pegasus {USA}), the sister of Zizou from the family of Not A Single Doubt and Oohood, Lot 2 in the sale.

Vancouver and Pride of Dubai never met on the racetrack despite being the best 2-year-olds of that year. Carey feels Pride of Dubai brings a strength of pedigree to his progeny which has allowed him to produce consistency across the board.

"Pride Of Dubai is the most accomplished 2-year-old by champion sire Street Cry (Ire), from a potent stallion producing pedigree." - Jim Carey

"Pride Of Dubai is the most accomplished 2-year-old by champion sire Street Cry (Ire), from a potent stallion producing pedigree," he said.

"His elite race performance as a juvenile is coupled with a pedigree that includes two of Europe’s best two-year-old sires, in Invincible Spirit (Ire) and Kodiac (GB)."

"As such, it is very encouraging that the Pride Of Dubais have the look of natural two-year-old runners. They are extremely mature horses that look very precocious and we expect them to be well sought after."

Coolmore will offer eight of them at the Magic Millions, with Carey predicting a strong across the board response from the market to his first offering.

"It is very encouraging that the Pride Of Dubais have the look of natural two-year-old runners." - Jim Carey

"Pride of Dubai throws a very consistent type and as such it is hard to single out one or two ‘stand outs’ in our draft as we are very happy with them across the board," he said.

"As types, we believe they are perfectly suited to the Australian market, particularly the Magic Millions in January where buyer focus is on speed and precocity."

"One that will create particular interest is the colt out of Danehill Smile (Danehill Dancer) (Lot 498), whose dam was a one-time Golden Slipper favourite."

Of course Coolmore have plenty more to offer outside those three stallions, with 57 yearlings part of their draft.

"As always, Fastnet Rock is sure to be popular, given that he continues to be the most potent source of Group 1 winners in Australasia. He is a great sire and has enjoyed another stellar run through the deeds of Merchant Navy, Shoals, Unforgotten, Comin’ Through, Avantage and Catchy," Carey said.

Of the six Fastnet Rocks on offer from Coolmore, three are out of stakes-winning mares.

"He has already proven himself as an extraordinarily versatile sire with the likes of Pierata, Levendi, Pinot and Tulip all coming from his first crop," Carey said.

Coolmore will also offer three of the 16 yearlings from the second-season crop of their stallion Rubick, who had 27 of his first crop sell at Magic Millions last year at an average of just under $150,000. Their offering includes Lot 513, a half-brother to Group 2 winner Man From Uncle.