Scenic Lodge Stud's Jeremy Smith knew it was never going to be easy to replace Blackfriars, their star stallion who died suddenly 12 months ago.

But the success of two of their other stallions, Snippetson and Universal Ruler has softened the blow of Blackfriars' departure and allowed Smith and his father David, who owns Scenic Lodge, to focus on the future.

Scenic Lodge Stud is one of WA's biggest operations, standing three stallions - the third is Dash For Cash - with up to 80 broodmares also stationed on the farm located at Muchea about 50km north of Perth. 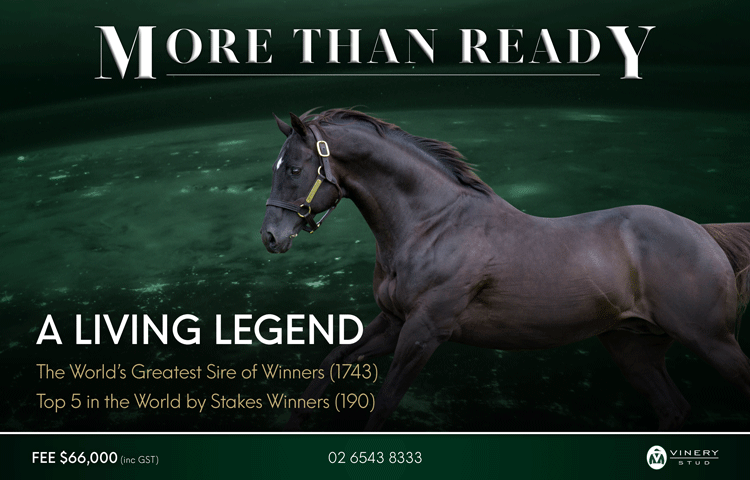 Jeremy Smith said that while they would always consider adding a fourth stallion should the right one become available, a drop in the number of foals being bred in WA makes it very hard to add an untried proposition.

"It’s just very hard to kick off a new horse over here," he said. "The numbers being bred are really down in the state. It makes it hard for anyone, let alone a new stallion to get a go."

"It’s an easy thing to say replace Blackfriars, it’s easy in theory. We are pretty comfortable with the roster we have."

Snippetson's first WA crop averaged over $31,000 at this year's Perth Magic Millions and are expected to make a significant impact on the track over the coming 12 months.

But the stallion who has the most upside for Scenic Lodge is Universal Ruler, whose progeny have won six stakes races since the start of 2018, with his demand at stud skyrocketing as a result.

"Suddenly he has gone from covering 29 mares, to covering 100, which is a big book for over here." - Jeremy Smith

"We’ve been a bit fortunate that we've had two proven options."

"They are two different types of horses. Different bloodlines and they offer different things."

Reflecting on Blackfriars' legacy, Smith is still in awe of what the stallion was able to achieve - including 39 stakes-winners- considering he spent his entire career in WA.

"He's always been a top 20 stallion, which is amazing for a stallion who stood his entire career in WA." -Jeremy Smith

"Being based here, in all fairness he was not getting the mares he would have got had he been based in a top eastern states stud," Smith said.

"He's always been a top 20 stallion, which is amazing for a stallion who stood his entire career in WA. It was just nice for him to get a horse like (multiple G1 winner) Black Heart Bart, who did a great job in the eastern states for him. He was just a really amazing horse and he did a lot for us."

While Perth racing enjoys its three weeks in the national spotlight culminating in Saturday's G1 Magic Millions Kingston Town Classic at Ascot, concern continues to mount about the decline in the local foal crop.

"It's just been a real decline in numbers getting bred. It's not just been happening this year or the year before, it’s been happening over the past six years, and we are really struggling for field numbers," Smith said.

"It's not just been happening this year or the year before, it’s been happening over the past six years, and we are really struggling for field numbers." - Jeremy Smith

"The whole industry is at a level where it doesn’t want to get much lower numbers-wise, or it will start to struggle."

"I don’t know what the answer is, but it’s quite concerning."

Smith said that while the big players remain committed to buying and breeding local horses, the lack of depth in both the buying and selling side of the thoroughbred industry is quite noticeable.

"You see that in the yearling sales, it's all very top end stuff. It's very good at the top, your good horses are making more than what you should, but it’s that middle and lower market."

"It’s those people from the country areas. The people that used to be your bread and butter. People who would breed, that's where it has all died."

Smith said incentives like Westspeed, which rewards locally-bred horses, were having some effect. The move of the Magic Millions Perth Yearling Sale to a new state-of-the-art sales facility in the Swan Valley in February was another boost.

The 2019 catalogue for that sale was released this week.

Included among are 21 of their own yearlings , Scenic Lodge will take to the that sale in February as well as the seven they will offer on behalf of others, will be 12 of Blackfriars' penultimate crop.

Smith estimates around 90 per cent of horses bred on Scenic Lodge go through the sales and one of their graduates, Great Shot (Magnus) contests the G1 Kingston Town Classic on Saturday.

An upset winner of the G1 Railway S. last year, Great Shot has proven a great buy for the Edwards family as a $31,000 yearling who has now won over $1.3 million.

"What a really great horse he's been. He's been so genuine. He gives his all. They've done a fantastic job and he's been really good for us," Smith said.

Scenic Lodge bought his dam, Satin Covers (Dr Grace {NZ}), in foal to Magnus, but she was unable to produce another foal after Great Shot.

One of the few fillies they have themselves to race in recent years, Elegant Blast (Blackfriars), was also in the field for the Kingston Town, but has been scratched and will instead contest the GA Towton Cup on the same program.

A winner of four races and nearly $350,000 in prizemoney, she has proven very handy on the track and given her pedigree, could be even more useful in the breeding barn.

"Her mum is a half sister to (triple Group 1 winner) Scenic Blast as well as (G1 winner) Gilded Venom. It’s a really good family," Smith said.

Elegant Blast herself is a half to Listed winner Red Blast, while she has a younger half-sister by Universal Ruler called Scenic Charm, who the Smiths have a small share in, as well as a yearling full sister who is going through the Magic Millions Sale in February, as Lot 25.