Dainty Tess puts her sire in the shop window

While War Chant (USA), the 2000 Breeders' Cup Mile winner, already has plenty of runs on the board, thanks largely to G1 William Reid S. winner Silent Sedition, the presence of a flagship horse during the peak period for Perth racing is always a bonus.

He may well have a second Australian Group 1 winner by the time the Carnival is over, with star mare Dainty Tess, trained by Dan Morton, one of the leading chances for the G1 Winterbottom S. on December 1. 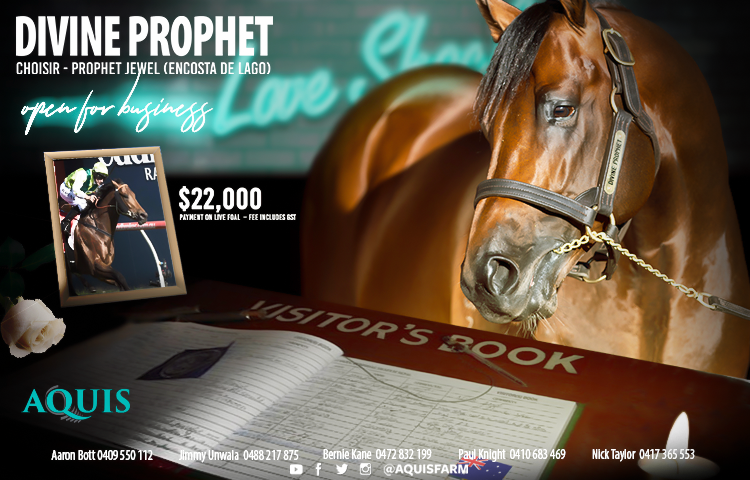 She has already put together back-to-back stakes wins this campaign in the Listed RS Crawford S. and the G3 Prince of Wales S. and takes on the G3 Colonel Reeves S. this Saturday at Ascot.

"She's a very good little promotion unit for him that's for sure." Hamill said of Dainty Tess.

"I suppose it would be better if the carnival would be a little bit earlier and get some more bookings during the year." - Bernie Hamill

"It's excellent timing. I suppose it would be better if the carnival would be a little bit earlier and get some more bookings during the year. Other than that, you hope that next year people will still remember."

While a full brother to Dainty Tess will go through the sales ring at the Perth Magic Millions early in 2019, a full sister arrived last month at Yarradale.

"She's a grey filly. She's a little bit taller than Dainty Tess, they were both fine little things, but this one's a bit bigger," Hamill said of the new arrival.

Dainty Tess is not the only one of War Chant's progeny flying the flag. War God, a winner of the Listed HG Bolton S. earlier this year has been placed in three consecutive stakes races and takes on the Group 3 RJ Peters S. on Saturday.

Meanwhile, the unbeaten War Room, who was sold to Hong Kong after winning the Listed Sir Ernest Lee Steere S. last December, is set to make his debut at Sha Tin on Sunday.

War Chant is Yarradale's headliner on a roster of five, with the former shuttler standing for $11,000, and the remaining four, Bradbury's Luck, Gingerbread Man, Heritage and Vital Equine (Ire) all standing for $4400.

But even for a proven stallion, the market is tough according to Hamill, who says a reduction in the amount of mares in WA makes it heavy going.

"It’s been steady, but we haven't been knocked off our feet. I don't think anyone is in WA," she said.

"Everyone in WA has cut their numbers down and we had five new stallions last year and that thins the overall demand. When you look at the bottom line and what they can afford to spend, people are cutting back."

With fewer mares and more stallions, the pressure comes back on the studs to reduce their fees, but it would not be something Yarradale would contemplate with their banner stallion.

"With War Chant, we figure he's done enough and being an older horse, we don’t want to adjust him." - Bernie Hamill

"With War Chant, we figure he's done enough and being an older horse, we don’t want to adjust him," Hamill said.

"If people are serious about it, they'll pay that. We want those mares that are a better type of mare that people will send to him anyway."

"We also pay on live foal, which means they don’t have to pay for 12 months. You want to attract the better mares and if you keep dropping your service fees, you tend to get the lesser mares people want to take a punt with, which won’t do anything for the stallion later on."

Yarradale has a large broodmare band with 85 of their mares covered by their stallions this season, around 60 per cent of the total coverings.

That's a reduction of around 50 on last year with Hamill saying it was important to meet the market.

Stars by Gingerbread Man to emerge

Meanwhile, the progeny of another one of their stallions, Gingerbread Man, are also doing their best for their sire at the right time of year.

Achernar Star has been stakes-placed his last two, while Hamill said there are a few others she expects to make an impression over the summer period.

"They all need a headliner to keep them in the news. Achernar Star is going good. He's got another filly coming back soon, which the Pearce boys (Daniel and Ben Pearce) have got called Essential Spice. She goes good. There's also a young horse called Neurological, who had won four in row."

"You just need these horses coming through all the time to keep him fresh in people's memory."