5 min read
The Coolmore Stud S. turned into a Zoustar blitz as Sunlight led home a 1-2-3 for the Widden Stud stallion.

The Group 1 Coolmore Stud S. produced a stunning result for Widden Stud, with their emerging star stallion Zoustar siring the first three horses across the line, including the filly that was bred on their farm, the winner Sunlight.

The champion first-season sire of last season now has a Group 1 winner, with Sunlight proving too slick and too tough in the 1200m test, holding off the colt Zousain, which Widden recently bought an interest in, and Lean Mean Machine in third.

Remarkably, Sunlight became the fourth generation of her family to win this race after Zoustar's success in 2013, Northern Meteor's win in 2008 and Encosta de Lago, when it was known as the Ascot Vale S., back in 1996.

Widden was rocked when Northern Meteor died in 2013. Having then gone out and purchased Zoustar, his best-performed son, Saturday was an enormous vindication for owner Antony Thompson,

"To do it with his first crop, it is such a stunning achievement" - Antony Thompson

"To do it with his first crop, it is such a stunning achievement. He is such a special horse. Northern Meteor was so dear to us and to ride that journey, it was well documented, it was a tough one," he told Racing.com post race.

"We had to have Zoustar and to see him trifecta this race, the race he won, and this is now four generations, through Encosta and Northern Meteor, then Zoustar and now Sunlight, is extremely special." 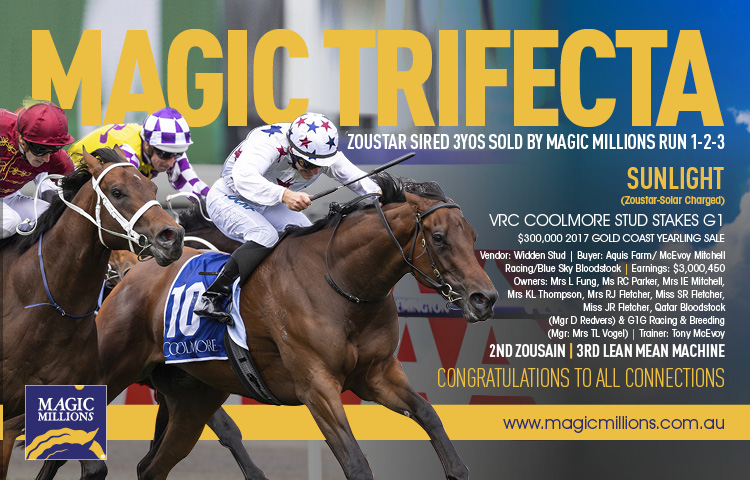 It was even more special for Thompson, who bred the filly and whose wife Katie owns a share along with Loretta Fung, the wife of Aquis Farm supremo Tony Fung.

"To breed this filly is one of our greatest moments and with my wife involved in it, it’s very pleasing," Thompson said.

"To breed this filly is one of our greatest moments and with my wife involved in it, it’s very pleasing," Thompson said.

Thompson also paid tribute to Qatar Racing's Sheikh Fahad and David Redvers, who have played a major role in both Zoustar's and Sunlight's success.

"For Sheikh Fahad and David Redvers, who backed us with Zoustar and bred this filly with us, this one is for you guys."

In a super competitive Australian stallion market, Zoustar looms as an emerging superstar and this moment, his first Group 1 win, could prove the point where he switches from the next big thing to a star in his own right.

"We've always thought that (he could be the next star). To have three runners in the first crop in this race is a hell of an achievement, to trifecta it is next level," Thompson said.

"We’re sort of pinching ourselves that was a place we didn't even dream of. To have that happen, is so stunning."

It was also a significant success for Sunlight's trainer Tony McEvoy, who has guided her from being a precocious yet tough 2-year-old good enough to win a Magic Millions Classic and then run a pale in a Golden Slipper, to the winner of one of the biggest 3-year-old races on the Australian calendar.

"Wow. It was a big call to take these colts on with this filly, but I've got such faith in her. She was there for the fight today and those colts had such a chance to get her. She's a courageous superstar, and I couldn’t be more proud of her," McEvoy said.

It was the seventh Group 1 victory of McEvoy's career but one of the more satisfying, given how much Sunlight has meant to him.

"She didn't get a lot of cover and she was there in the breeze, but I had the faith in her. She was too good for the colts through her 2-year-old days, and they get those beautiful 2kg off them. What a thrill and what a great job by my staff."

"What a superstar stallion he is. I've got a lot of them, but not enough!" he said.

It was the fifth Group 1 win for jockey Luke Currie, but his most significant success, given it was his first during the Flemington carnival.

"I don’t think I've ridden a winner on Derby Day, so to do it in a Coolmore is pretty ecstatic," he said.

Currie said that while Sunlight had to cut the breeze outside the leader Written By, he always thought she would have the strength to overpower her rivals.

"She flew out today. I wasn't sure whether I should lead Written By or let him lead us and he was quite quick too," he said.

"But she relaxed on the buckle in the run and I knew she was going to hard to beat when she hadn’t spent any petrol at the 400m mark."

Sunlight, a $300,000 Magic Millions purchase, is the fourth foal from the stakes-winning mare Solar Charged (Charge Forward). Her younger full sister Sisstar, owned in similar interests, debuts on Tuesday at Flemington, while there is a Sebring yearling half-brother and a foal by Zoustar was born at Widden only last week.

Next article
Derby dominance flips tough week on its head