Like Neil Armstrong taking those first steps on the Moon in 1969, she too has gone to a new frontier with her history-making third successful defence of the Southern Hemisphere’s weight-for-age championship.

Winx, Queen of the saucer-like Moonee Valley track, and everywhere else she has been for that matter, is the toast of the racing world.

Integral to her story are trainer Chris Waller, jockey Hugh Bowman and owners Debbie Kepitis, Richard Treweeke and Peter and Patty Tighe’s Magic Bloodstock, all of whom have been most gracious throughout.

“I’m just blessed to have a horse like Winx.” – Chris Waller. 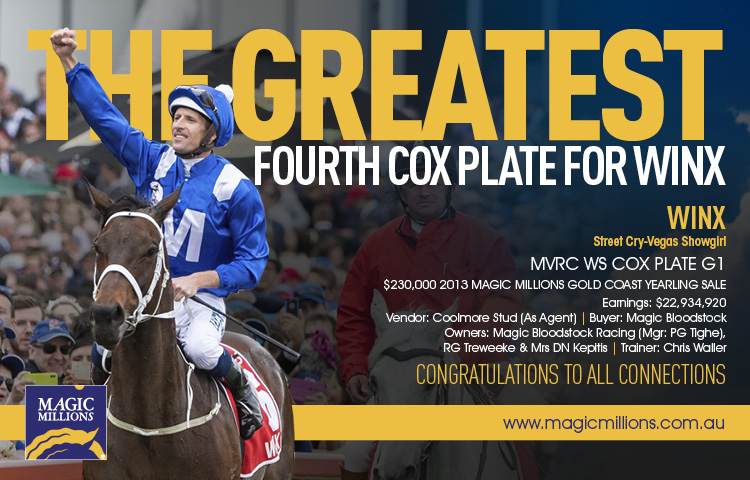 “I’m just blessed to have a horse like Winx,” an emotional Waller said. “Every race with Winx is so important and this was her grand final for this preparation.

“The reception has been amazing – this is our sport at its best and I’m just so proud to be part of the Winx story.

“It’s indescribable. It’s all gone to another level, it’s obviously pretty special and I can’t say much more – I’m gassed.”

Winx raced on her own in fifth spot and when rider Hugh Bowman made his move 600 metres from the 38,000 fans on course erupted.

The great mare ambled around the field to be in front before the turn and then coasted to her 29th win on the bounce and 22nd at Group 1 level.

“They were going a bit slowly early and that was my only concern – she only performs under pressure, but then to see her unleash as she does was great and Hughie had them covered a long way from home,” Waller said.

Bowman had the ride of his life and, humble as ever, just paid tribute to Winx and her super equine qualities.

“It was a huge build-up and the expectations were on her, and myself I suppose, and I’m so proud of the horse and Chris Waller and his staff.” – Hugh Bowman.

“It was a huge build-up and the expectations were on her, and myself I suppose, and I’m so proud of the horse and Chris Waller and his staff,” he said.

“It’s a really humbling feeling and she’s such a wonderful horse and I’m lucky to be part of a fairytale.

“I can’t describe the feeling. We were stepping into unchartered territory, but she’s a super athlete who has brought so much joy to so many people.

“I’m just pleased so many have seen the superb ability of this horse. I’m so, so proud to be part of this amazing story.” – Hugh Bowman.

“I’m just pleased so many have seen the superb ability of this horse. I’m so, so proud to be part of this amazing story.”

Winx’s part-owner Debbie Kepitis was understandably overwhelmed by the occasion.

“It’s a bit surreal, four Cox Plates – how do you describe that?” she said. “She’s a mighty mare and Benbatl was there to beat her and I thank them for coming over. She showed her talent and Holy Moly, we’ve done it.”

“She’s a superstar. He ran a great race and we took our chance, but she’s something very special,” he said.

Next article
Any comparisons both unfair and unnecessary