Amphitrite (Sebring) completed her remarkable transition from a Sale maiden winner only last month to a G1 Schweppes Thousand Guineas heroine with a stunning performance at Caulfield on Saturday.

She progressed from her breakthrough victory to Benchmark success at Flemington and earned a Classic call up when she landed the G2 Edward Manifold S.

Amphitrite’s emergence has also been something of a surprise, but an obviously more than pleasant one, to trainer Darren Weir.

“It’s amazing where these horses can come from.” – Darren Weir.

“It’s amazing where these horses can come from,” he said. “She showed a little bit last preparation, but nothing like this.

“She went out and matured and she’s a big, strong filly. Most of the time something goes wrong, but not with her.” 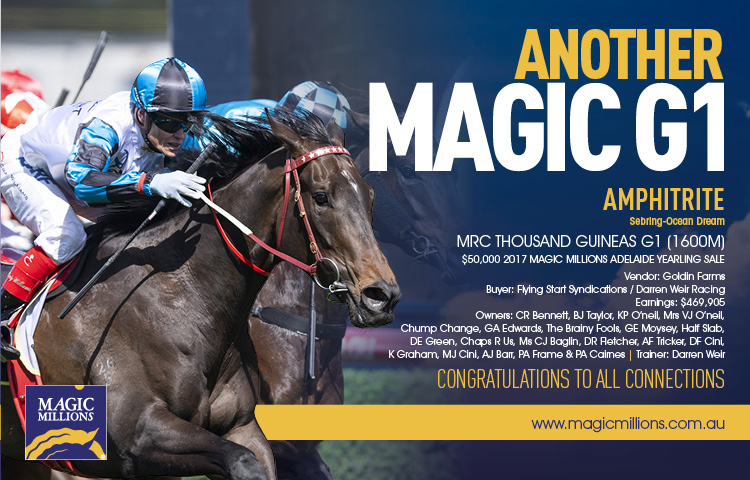 Drawing the outside gate in the Guineas would have been met with disappointment by most trainers, but not Weir.

“The barrier could have been seen as a disadvantage, but if she’d drawn a gate she might have got muddled up and not get clear air,” he said.

Amphitrite settled at the tail-end of the field and came with a paralysing burst in the straight to beat Fundamentalist (Not A Single Doubt), who looked the winner 150 metres from home, and Seabrook (NZ) (Hinchinbrook) got home well for third.

“She really let go late, it was a terrific win,” Weir said. “Going by that, 2000 metres will be right up her alley so we’ll look at the Wakeful.

“It doesn’t matter what happens now, she’s done all she had to.”

Craig Williams has been aboard the filly in all her starts this season and he paid tribute to not only Weir’s conditioning skills, but also his pre-race manner.

“When they pulled out (barrier) 16, Darren gave me so much confidence,” he said. “He said to ride her dead quiet and come in the straight.

For Queensland syndicator Cameron Bennett, it was a dream result for his company First Light, who paid $50,000 for Amphitrite at the Magic Millions Adelaide Sale.

She is out of Ocean Dream (Redoute’s Choice), who won two minor races, and is a three-quarter sister to the G1 New Zealand 1000 Guineas winner Powley (NZ) (Noble Bijou {USA}) and a half-sister to the G1 Toorak H., winner Marble Halls (NZ) (Nassipour {USA}).