7 min read
In the space of four weeks, Redzel has taken his connections from despair to euphoria with his second win in The TAB Everest.

A month ago, Peter Snowden and the connections of Redzel (Snitzel) were wondering if their hopes of winning Australia's richest race again had been dashed by a freak accident.

Snowden, who trains with his son Paul, has seen most things in his long career in racing. But when Redzel emerged from his box on the morning of The Shorts sore and sorry after getting cast in his box, another summit of the famous race seemed a long way away.

"What happened in the last month has just been incredible. I wanted to run the horse that day and for some unknown reason he got cast in his box," Snowden said after Redzel's win on Saturday.

"In two and half years, he's never done it before, he chose the night before a race to be cast and be sore. I thought I'm in trouble now, because it has mucked up the whole preparation I had in my mind for him."

It was a similar sinking feeling for managing owner Michael Ward of Triple Crown Syndications.

"The heart did flutter a bit when I got that phone call on the Saturday morning of The Shorts," Ward said. "But when you've got Grand Final trainers like Peter and Paul. They are magical." 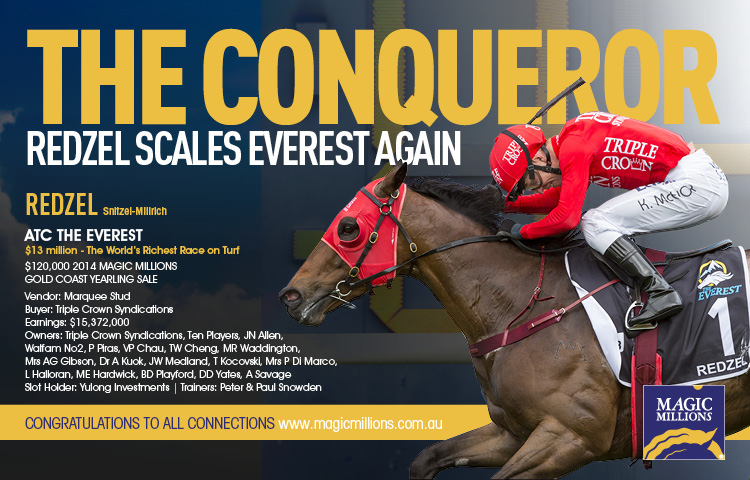 Even two weeks ago Snowden's faith was again tested when Redzel returned in the G2 Premiere, where he finished fifth.

"I was disappointed on the day, but I could see in his performance it wasn't a bad run. And the last two weeks have been perfect," he said.

But as many of Redzel's major rivals lamented the falling rain this week, Snowden knew things were finally falling in his favour.

"We wanted rain and there has just been rain coming all week. And everything has just fallen into place today, and I just can’t believe it." - Michael Ward

"We wanted rain and there has just been rain coming all week. And everything has just fallen into place today, and I just can’t believe it," he said.

As far as $13 million races go, it was as comfortable as it could get. Likely speed rival U S Navy Flag (USA) (War Front {USA}) missed the start, leaving Redzel to dictate.

“From the 1 gate, that was Plan A, to control it from the front," jockey Kerrin McEvoy said. "That’s what this horse is able to do. He loved the ground and is such a little warrior. He is a joy to be a part of.”

McEvoy never really had any concerns. Redzel put a couple of lengths on his rivals at the top of the straight and while Trapeze Artist (Snitzel) tried valiantly to close the gap, he never seriously looked a threat.

Post-race Snowden was still trying to comprehend how straightforward the race has been.

"I just hope I don’t fall out of bed and wake up. It's been a dream." - Peter Snowden

McEvoy, a two-time winner of the Melbourne Cup, was simply delighted to have written his name as the first dual winner of this race.

“This is euphoria at its best. It is such an electric feeling. I was really happy there was a bit of rain around and he did the rest. It is a huge buzz to win it again, unbelievable,” he said.

Triple Crown bought Redzel for $120,000 at Magic Millions and he has now surpassed Maybe Diva as Australasia's second biggest prizemoney winner, with $14.8 million.

"Different weather same result, it’s an absolute dream come true," Chris Ward said. "To do this the first time was unbelievable, it was beyond our wildest dreams to do it again."

It was also a significant success for Yulong Investments and their owner Zhang Yueshang, the slot-holders who selected Redzel all the way back in May. Yulong have invested significantly in Australia over the past five years and on Saturday got one of their biggest rewards.

"(Mr Zhang) was always keen on the horse. He is a big follower of Australian racing and he's been a big fan of Redzel. He was super keen to get him in his slot," Chris Ward said.

The logical question now is whether Redzel will be set for a third straight shot at the race.

"Why not, he's only young," Michael Ward said, "I like this race, I've taken a real shine to it."

"We'll have to, I've got no choice, he's a gelding," the trainer said.

Jockey quotes after The Everest

“It was similar to last year. Last year we had a bunny, this year there were a few scenarios going through Peter and Paul’s heads and mine as to how it might unfold.”

“I thought Ryan Moore’s horse (U S Navy Flag) might be a bit of a pest early, maybe Hayes’ horse (Vega Magic) with the Blinkers on if he got a bit keen.”

“From the 1 gate, that was Plan A, to control it from the front. That’s what this horse is able to do. He loved the ground and is such a little warrior. He is a joy to be a part of.”

“He is quite reserved other than raceday. He saves himself and all he wants to do is gallop and gallop hard. He is a little gem, he is my little gem.”

On riding for the Snowden’s:

“I want to say a big thanks to Peter and Paul obviously but also the whole Snowden clan for their hard work, it’s a big team and they work long hours. Peter cracks the whip with them a lot. Us jockeys sort of duck in and duck out on gallop days and a lot of the wrath.”

“To young Chrissie who looks after him, she does a stellar job, she was swinging off him the other day when he was raring up and carrying on.”

Tye Angland (Trapeze Artist): “We’ve got to take that as a win, he went so well, it’s just hard to run Redzel down on a wet track where we don’t perform to our best, he gave his all, tried his heart out, confident we would have been closer in the finish if it was a firm track.”

Tommy Berry (Osborne Bulls): “I feel like we’ve won it, massive training effort from the team, we only knew he was getting in this week, to get him primed for this after coming back from 1400m, he was fit, ready to go. We had a good walk of the track before, me James and team and we pulled it off, it was good.”

Glyn Schofield (Le Romain): “He ran super, nice performance on the speed and toughed it out nicely.”

Brenton Avdulla (Graff): “He ran terrific, didn’t have much go his way, just that track sort of bottomed him out a little bit, he’s going to be a super colt next time in.”

Ben Melham (Santa Ana Lane): “He ran well, but we were in trouble a furlong after the start, it was just too heavy for him.”

Corey Brown (In Her Time): “She ran well, but she never handled the track for one stride, she was under pressure from the get-go.”

Hugh Bowman (Brave Smash): “We had a nice run throughout, but all credit to the winner, he was too good for us all.”

Joe Bowditch (Viddora): “Really disappointing, she’s pulled up a little bit distressed, we’ll see how she goes after this.”

Tim Clark (Shoals): “She just didn’t go a yard in the ground, she was dipping and diving and lost all confidence.”

Damien Oliver (Vega Magic): “Too wet for him, just didn’t handle the track.”

Next article
Sun shines as star colt turns on the burn