6 min read
As slotholders for The Everest have been scrambling to find new contenders, Coolmore's contender U S Navy Flag (USA) has been building towards his peak on October 13.

The field for The TAB Everest is now locked away after a dramatic week of renegotiations, which saw three horses originally selected drop out and four more, Graff (Star Witness), Home of the Brave (Ire) (Starspangledbanner), Viddora (I Am Invincible) and Le Romain (Hard Spun {USA}), secure their spots. (Image: RacingFotos)

Watching on as all the last-minute trading occurs has been the team at Coolmore, whose only concern has been ensuring U S Navy Flag (USA) (War Front {USA}) continues his preparation for the $13 million race on October 13.

With a global suite of their own stars to pick from, Coolmore does have an advantage over the other slotholders, many of whom have had to change course in recent weeks.

But the other edge they possess is experience with the whole selection process, having negotiated eventual winner, the Juddmonte-owned Arrogate (USA) (Unbridled's Song {USA}), to run in their slot in the inaugural Pegasus World Cup in 2017, the race upon which The Everest concept is based. 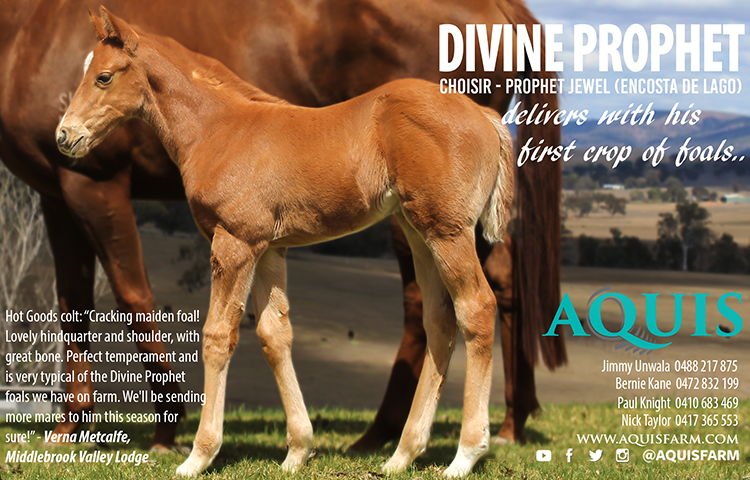 "The Everest has gathered huge momentum in such a short time and everyone involved in its development must be applauded." Tom Magnier

"When The Everest concept was unveiled it made great sense for Coolmore to become involved," Tom Magnier, Principal of Coolmore Australia told TDN AusNZ.

"Coolmore had already enjoyed a very positive experience with a similar concept in the US via the Pegasus World Cup and we are delighted to have been able to support an event which has put racing on the front page of the newspapers."

The buzz which The Everest has generated in just its second year is something which has justified the faith Coolmore had in the concept.

"The Everest has gathered huge momentum in such a short time and everyone involved in its development must be applauded," Magnier said.

"It is a fantastic innovation by the teams at Racing NSW and the ATC. It is a great window through which to further showcase Australian racing and breeding to the world."

With such a depth of talent at their disposal, it is no surprise that in the two editions of The Everest, Coolmore have opted to run their own horses in their slot.

Last year it was the local filly Tulip (Pierro), who acquitted herself well, finishing fifth, while this year, they brought their best credentialled sprinter from Europe, who will be the first internationally trained runner in the world's richest turf race.

In U S Navy Flag, they have a world class Northern Hemisphere 3-year-old who was a dual Group 1 winner at two and who dominated from the front in beating many of Europe's best in the July Cup at Newmarket.

"U S Navy Flag stamped himself as a horse with extremely rare ability after being crowned champion two-year-old in Europe, where he won the G1 Middle Park/Dewhurst Stakes double," Magnier said.

"That being said, it wasn’t until he was dropped back to sprinting and won the July Cup so convincingly, that he confirmed himself as an Everest contender."

"U S Navy Flag stamped himself as a horse with extremely rare ability." - Tom Magnier

It was not a given that Coolmore would always select their own horses. Magnier said that the Pegasus experience with Arrogate had taught them the importance of keeping an open mind.

"Coolmore is blessed with an incredibly talented racing team throughout Europe, America and Australia," he said.

"Our slot in the first two editions of The Everest will be filled by Coolmore-owned horses, however we would be open minded to the idea of negotiating a deal with an externally owned horse in the future."

The initial plan for the first edition of the race was to bring the brilliant Caravaggio (USA) (Scat Daddy {USA}) to Australia, but the timing of the event at the end of the European season made that difficult.

"As the profile of the race grows, it is likely that the volume of international participants will grow also." - Tom Magnier

"Caravaggio was an incredible sprinter who would have acquitted himself with distinction if he had taken his place in The Everest last year, but unfortunately things didn’t work out," Magnier said.

"The Everest falls close to the end of the northern hemisphere racing season, so one must plan carefully for it. Any northern hemisphere-based horse that plans to target the big race probably needs to be afforded time to recover from a rigorous European summer campaign, so planning is everything."

While there were no internationally trained runners in the inaugural edition, Magnier feels that with the efforts being made by the organisers of the race, the barrier to entry for those internationally prepared horses has been reduced significantly.

"The ATC have been very accommodating in terms of their efforts to facilitate international runners and as the profile of the race grows, it is likely that the volume of international participants will grow also," he said.

Coolmore's American-bred contender for this year's race certainly has the qualities needed to compete with Australia's best over the 1200m at Randwick.

"U S Navy Flag possesses great cruising speed, which he is able to sustain for an extended period of time. The Everest will be a high-pressure race that will be run at a very fast pace, but as he showed in the July Cup where he beat 6 individual Group 1 winners, he is an extraordinarily hard horse to get past," Magnier said.

Key to any success will be ensuring U S Navy Flag is ready to compete at his best at his very first start in Australia, something Magnier feels Coolmore are well equipped to deliver on.

"It promises to be an unbelievable spectacle that the whole racing world will be tuning in for and we are excited to be part of it."

"Aidan O’Brien is one of the greatest trainers of all time and his team at Ballydoyle are incredibly talented horsepeople," he said.

"Travelling horses across the world for top-class races is not a foreign concept for them. We have complete faith in them to get the horse to the race in perfect condition, giving him every chance of winning what is going to be an extremely competitive race."

But the challenge of bringing a horse from the other side of the world and pitting it against the best local horses is not something that the team takes lightly. Success in the race will certainly be well-earned, according to Magnier.

"Australia is home to some of the best sprinters in in the world and we are under no illusions as to the quality of the opposition. It is a challenge that we are really looking forward to," he said.

"It promises to be an unbelievable spectacle that the whole racing world will be tuning in for and we are excited to be part of it."

Next article
Impact a positive for Vegas Showgirl