4 min read
Trainer Lloyd Kennewell and jockey Joe Bowditch have marked their arrival in Melbourne in the best manner possible as their brilliant mare Viddora (I Am Invincible) won the G1 Charter Keck Cramer Moir S.

Trainer Lloyd Kennewell and jockey Joe Bowditch have marked their arrival in Melbourne in the best manner possible as their brilliant mare Viddora (I Am Invincible) won the G1 Charter Keck Cramer Moir S.

Kennewell decided to make the big move from his Adelaide base and arrived in Victoria just six weeks' ago bringing his experienced stable jockey Bowditch along with him as well as his young family.

And having watched Viddora miss by the narrowest of margins in this race 12 months ago, she gave them a perfect housewarming present by recording a dominant win on Friday which catapults her into contention for The Everest.

"That's my biggest moment in racing right there, right now," a jubilant Kennewell said. "It still hasn’t sunk in."

"I'm so proud of Joe, who moved his life over here as well. There's a big depth in the jockey ranks over here. He's come over and that will kick him along as well as me having only been here for six weeks."

It’s a third Group 1 win for Bowditch, who at 41, has been somewhat of a journeyman. 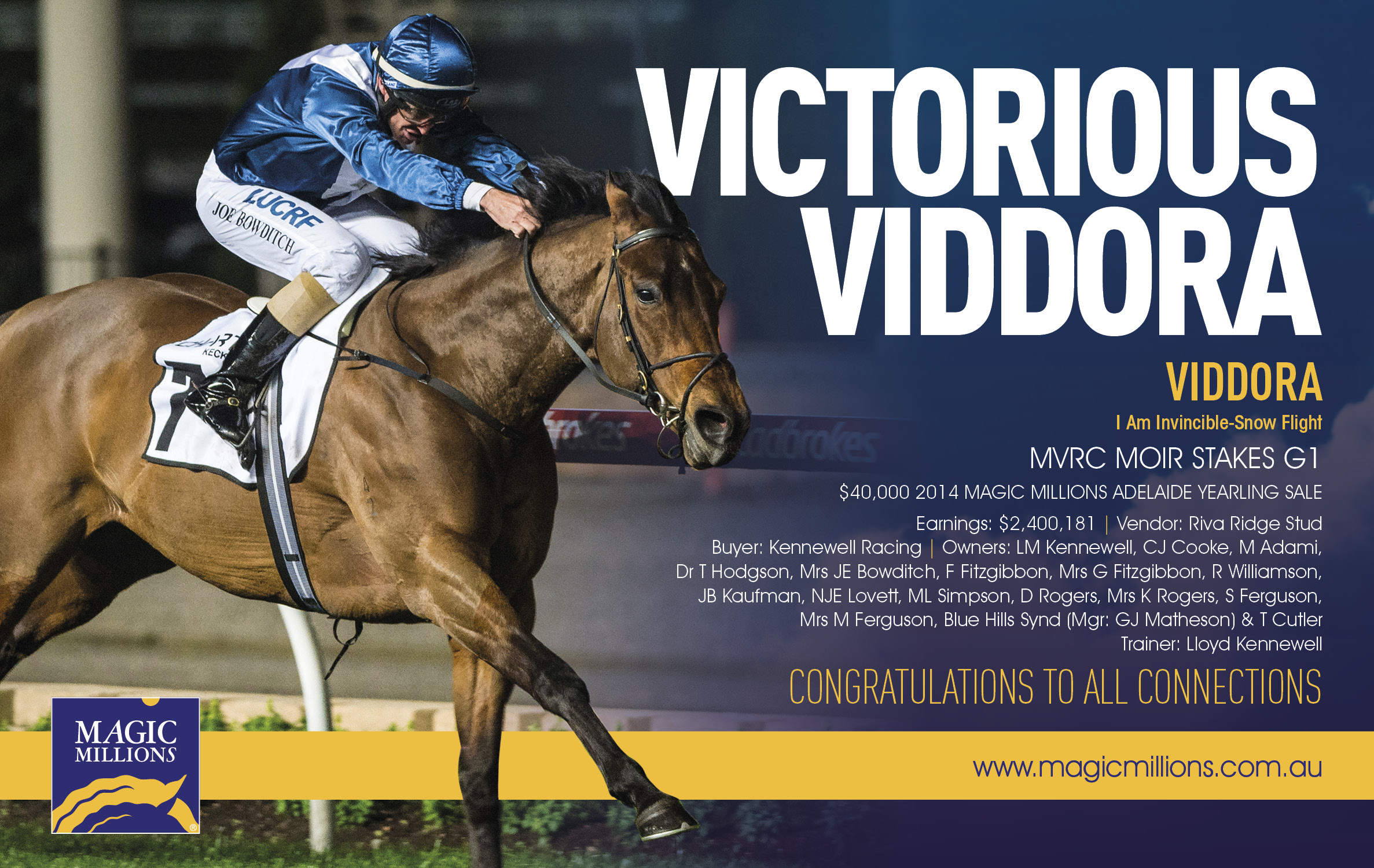 "She's a beautiful mare. She's given me the ride of my life," he said.

"To get a Group 1 winner in Melbourne means a lot. We’ve just moved here and we are just trying to find our feet me and Lloyd. He's done a fantastic job with her and it's great to get a Group 1 on the board so early in our time here."

"It makes it all worthwhile, you make the sacrifices, but the rewards are worth it if you can make it here."

Both jockey and trainer were surprised by how easy the win came, with Viddora settling in the perfect position midfield off the hot pace set by Nature Strip (Nicconi).

She unleashed an almighty sprint at the top of the straight and had the race sewn up with 100m to go.

"I knew I was on the horse with the best turn of foot in the race. When she put herself in a good spot tonight, I knew she would take a bit of catching," Bowditch said.

When she put herself in a good spot tonight, I knew she would take a bit of catching," - Joe Bowditch

The Everest is the logical next step off such a dominant Group 1 win, and Kennewell revealed he had a brief conversation with slotholders Neil Werrett and Max Whitby ahead of Friday's race.

With Chautauqua (Encosta De Lago) now retired after refusing to leave the barriers in a trial, she looks in a good position to secure the final spot in the 12-horse field.

"It's been a great ride and to possibly get that slot in The Everest, I think she deserves it," Kennewell said.

While Viddora's prospects soared, those of Nature Strip looked a lot less brighter as he faded to finish eighth, beaten nearly 4.5l.

Trainer Darren Weir said connections of the 4-year-old would assess their options over the next couple of days, but he felt Nature strip might have had enough this campaign.

"You have to think about the horse first, you have to forget about The Everest. We'd love to get him to The Everest but the horse comes first. The big prizemoney can confuse you sometimes, but I just want to focus on the horse and let him tell me if he's right," Weir said.

"The big prizemoney can confuse you sometimes, but I just want to focus on the horse (Nature Strip) and let him tell me if he's right." Darren Weir

Even if Nature Strip does not make The Everest, Weir looks to have a strong contender in last year's third placegetter Brave Smash (Jpn) (Tosen Phantom {Jpn}), who charged home for second in the Moir.

"He'll present there in great shape providing everything goes right in the next fortnight."